Natalie Portman Takes A Stand, And Israeli Expats Sigh Over The Challah

Friday afternoon is always a busy time at Queens Pita, a sunny bakery on Flushing’s Main Street. The Jewish Sabbath, which starts with sundown, is descending. When the Forward visited on April 20, shoppers from across the borough were snatching up rugelach and challah as part of their preparations for the holiday.

“The challah here is the best,” said Sarah, who drove in from a few miles away and was filling her car with a dozen plastic bags of food from the bakery.

“We have fresh babka!” exclaimed Shoshana Rosenfeld as she carried a loaf enticingly around the store.

The scent of sugar and the sounds of Hebrew, Russian, Yiddish and English filled the air. The Israelis on hand wanted to chat about the prior day’s Israel Independence Day celebrations. They weren’t eager to talk about politics — especially not Natalie Portman, an American-Israeli actress whose decision not to attend an award ceremony in Israel threw every expat’s relationship with the land of their birth into sharp relief. Some embraced her action, some lamented it, and others used social media to give a big sabra shrug and urge everyone to move on.

“She should have more respect for Israel than this,” said Rom, who was born in Iraq and moved to Israel with her parents. She’s live stateside for over 40 years. “It’s surprising, and upsetting, but she can do what she wants I guess.”

Portman’s decision was announced on Thursday by the Genesis Foundation, which gives a cash award — this year, $2 million — every year to an exemplary Jewish person. Portman didn’t reject the prize itself, but said she could not “in good conscience” share a stage with Prime Minister Benjamin Netanyahu because “[r]ecent events in Israel have been extremely distressing to her.”

“I have nothing to say about her,” said one Israeli woman who did not give her name.

Another shopper, Lital, said she found Portman’s decision upsetting but wouldn’t say more. “God is watching over us. Shabbat Shalom,” she said, before she drove off.

Of course, some Israelis in the States live outside their country precisely because they object to its policies and actions.

Ita Segev, 29, has lived in New York for seven years. She left largely because she didn’t feel she could be herself as a trans woman in Israel, and is a member of Jewish Voice for Peace, an activist organization that protests Israel’s occupation of Palestinian territories.

Segev was “thrilled” when she read about Portman’s move on Twitter.

“American Jews are having such a hard time navigating their feelings about what Zionism actually is, and Palestinians are dying, and this is an emergency,” she said. “I am happy that Natalie Portman is doing her part.”

There’s more for Portman and other people of conscience to do, Segev said. Portman is talking about recent events, but she should be talking about the past 70 years, Segev added: “It’s white Jewish folks who started this mess, so it’s our job to also stop this mess.”

Other Israelis wanted everybody else to take a step back and calm down.

Regev Gur said the outrage was unnecessary, and that if Portman says she’s against the occupation, everyone should just say “Okay.” 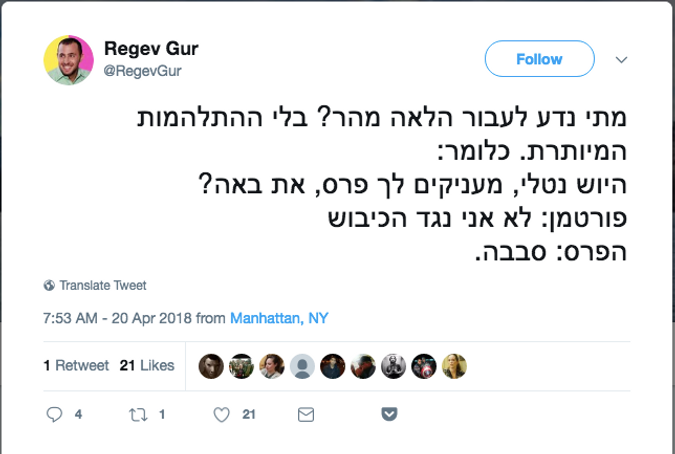 But Rom’s niece, Zalait, said that Portman shouldn’t talk about what she doesn’t know. Zalait, a real estate agent who grew up near Tel Aviv and has lived in New York for seven years, served in the Israel Defense Forces in Gaza in 1992 and 1993.

“Eyes are always on Israel, and people ignore all these other things that go on in the world,” she said.

Natalie Portman Takes A Stand, And Israeli Expats Sigh Over The Challah