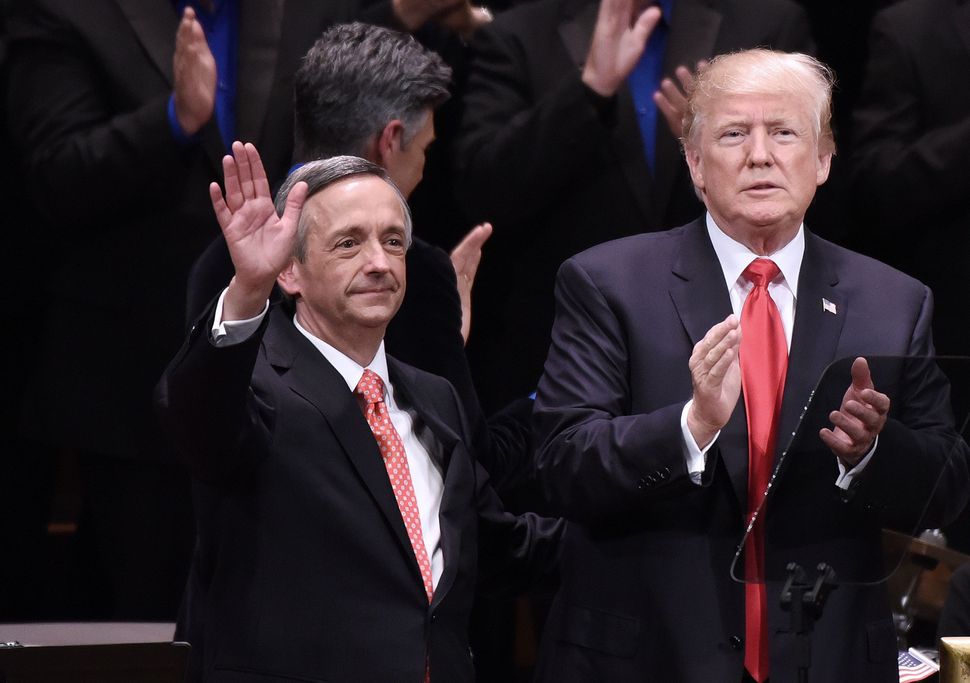 For Donald Trump, the opening of the new U.S. embassy in Jerusalem is a political victory.

But for evangelical Christians and some Jews, it is chiefly a religious victory.

But the outsize role of evangelical faith leaders in Monday’s ceremony was not simply a political favor. Experts say that it was the Trump administration’s way of endorsing evangelicals whose beliefs put Israel at the center of the apocalypse.

“The administration is saying, ‘We understand you, and we’re giving you what you’ve always wanted,’” said Richard Flory, director of research at the University of Southern California’s Center for Religion and Civic Culture.

No single faith group has supported Trump like evangelicals do. According to exit polls, 80% of evangelicals voted for Trump in the 2016 elections. Trump rallied the evangelical community with statements opposing legal abortion and supporting religious freedom. Trump’s favorability among evangelicals remains at 75% — versus a little over 40% for the whole country.

On Monday, the administration’s choices to represent American Christians showed their gratitude for such fervent support. Jeffress and Hagee, both pastors at Texas megachurches, gave blessings for the new embassy. By picking these two men in particular, experts say, the administration made it clear they support even the more controversial faith leaders in evangelicalism. And both Jeffress and Hagee made it clear they support Trump right back.

Both Jeffress and Hagee are known for having large followings in the evangelical world and taking hard lines on certain evangelical beliefs. Jeffress, whose radio and TV programs reach millions of followers around the world every day, has called Mormonism “heresy” and said that Islam and Judaism lead people to hell. Hagee, the president and CEO of Christians United for Israel, once called Adolf Hitler a “half-breed Jew” who was sent by God as a “hunter” to push Jews to Israel.

Both men also endorse an “end of days” theology that places Israel at the center of a pivotal battle between the Messiah and the antichrist. Jeffress called Jerusalem the “touchstone of prophecy” in 2017 after Trump announced the embassy move. Hagee recently told the Times of Israel that he supports the embassy move because it “is a fulfillment of the biblical position in the Torah… that toward the end of days, Jerusalem and Israel will be the epicenter of everything that’s going to happen.” Their views are in line with half of Israel-supporting evangelicals, who believe Israel support is key for hastening the “end times.”

The Trump administration came under fire from all corners over the weekend for giving the pastors stage time. Both Mitt Romney and the Anti-Defamation League denounced Jeffress on Twitter.

Robert Jeffress says “you can’t be saved by being a Jew,“ and “Mormonism is a heresy from the pit of hell.” He’s said the same about Islam. Such a religious bigot should not be giving the prayer that opens the United States Embassy in Jerusalem.

Today is a day of celebration as the US Embassy opens in Jerusalem. The choice of Pastor Robert Jeffress to offer a prayer sends exactly the wrong message. Jeffress has a history of bigoted comments about LGBTQ people, Jews, Muslims, Christians and other religions.

“There’s a ton of evangelicals they could have picked, and they chose those guys,” said Flory. “They’re older, they’re white, they’re male and they’re preaching to their own choir.”

The two pastors also showcase commonly held beliefs that non-Christians will go to hell when Jesus Christ returns as the messiah.

“That’s an extreme way to say that, but every white evangelical believes that,” Flory said of Jeffress and Hagee’s statements. “‘Mormonism is a cult, and Jews have no way to go to heaven unless they take Jesus as their savior.’ If you go to any major megachurch in America, I guarantee you most of the people will tell you the same thing.”

Flory said that Monday’s violent demonstrations in Gaza, where IDF soldiers killed over 50 protesters and injured over 1,000, also plays into evangelical narratives about the end of days.

“They interpret any violence there through that lens, that this is the next step toward Jesus coming back,” Flory said.

Some evangelicals, however, chafe at the suggestion that they only support Israel as a means to the return of the messiah.

“To take this popularized Apocalyptic end times view as the norm is a huge mistake. It’s absolutely not, and most evangelicals don’t share it,” Robert Nicholson, the executive director of the Philos Project, a conservative not-for-profit that encourages Christian political support for Israel, told PRI in 2016. ”There are evangelicals who think some of those things, but they’re an absolute minority.”

“It falls between what a preacher might say and what people really feel,” said William Smelvoe, a professor of U.S. evangelical history at St. Mary’s College.

Smelvoe told the Forward that there is a moderate section of evangelicals for whom Israel support is more political than religious. Those evangelicals are more likely younger and not as closely tied to the major institutions of evangelicalism today.

“This is on their radar, but I don’t see the U.S. moving its embassy as some sort of earth-shaking event for the community,” Smelvoe said. “In fact, it’s probably more just good for Trump than any prophetic tie-in.”

It’s not just evangelicals who view the embassy move as biblically ordained.

Netanyahu cited the prophet Zechariah in his speech: “So said the Lord, ‘I will return to Zion and I will dwell in the midst of Jerusalem. And Jerusalem shall be called the City of Truth.’”

And one Israeli not-for-profit minted a commemorative coin that made the connection between the embassy and prophecy pretty palpable. One side features Trump’s likeness next to both the Israeli and American seals. The other side features the façade of the Third Temple – the structure that Orthodox Jews hope to build on the land now occupied by the Dome of the Rock.

As Fox News noted, the coin cannot be used as actual currency.