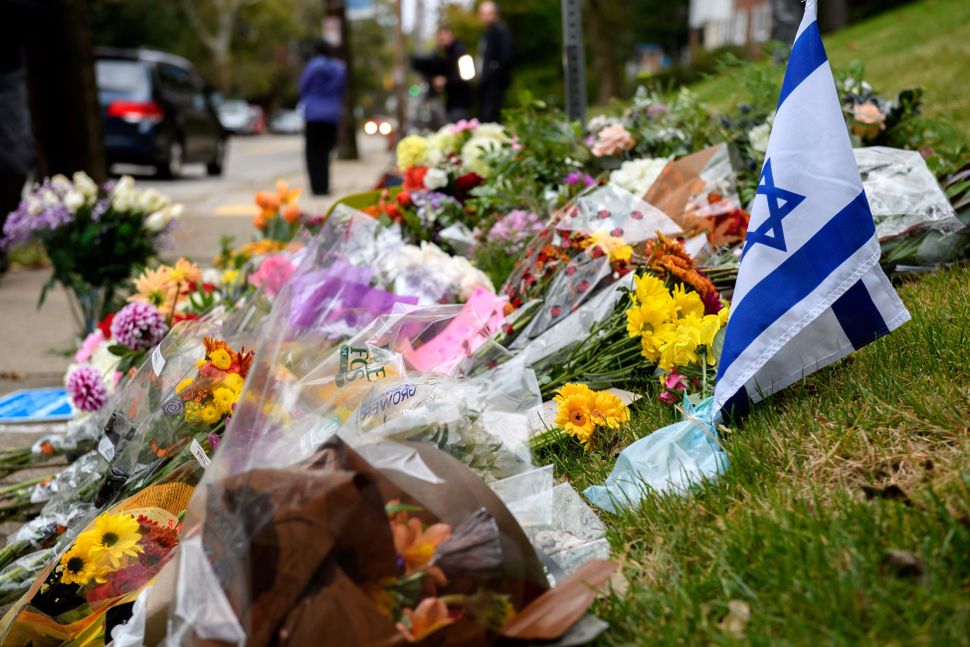 PITTSBURGH – On Sunday night, two letters addressing the terror attack against the Jewish community in Pittsburgh were made public. The letters – one written by Prime Minister Benjamin Netanyahu, the other by a small group of Jewish activists in Pittsburgh – provided useful glimpses into how Saturday’s tragedy at Pittsburgh’s Tree of Life synagogue is being perceived in Israel versus how it is viewed by many Jews in the United States. The two reactions could not have been further apart.

In a public letter to Pennsylvania Gov. Tom Wolf, Netanyahu chose to praise President Donald Trump for his reaction to Saturday’s mass shooting that killed 11 Jewish worshippers. “I want to express my appreciation to President Trump for unequivocally condemning this heinous crime and for pledging to fight those who seek to destroy the Jewish people,” the prime minister wrote.

A short time after his letter went public, 11 activists from the Pittsburgh branch of Bend the Arc – an organization for progressive Jews focused on social justice – published an open letter in which they urged Trump to stay away from the city unless he changes his rhetoric on racism and violence in politics.

“President Trump, you are not welcome in Pittsburgh until you commit yourself to compassionate, democratic policies that recognize the dignity of all of us,” the activists wrote.

Continuing to address the president, they added that “for the past three years your words and your policies have emboldened a growing white nationalist movement. You yourself called the murderer evil, but [Saturday’s] violence is the direct culmination of your influence.”

Their open letter made national headlines in the United States and has so far been co-signed by over 21,000 people online.

These two anecdotes tell a larger story about how the Pittsburgh tragedy is being viewed by the current right-wing government in Jerusalem and by the overwhelmingly liberal American-Jewish community.

In conversations with Jewish residents in Pittsburgh over the past two days, it was common to hear complaints and direct accusations aimed at Trump – especially regarding the violent rhetoric at his political rallies, such as the calls to “lock up” his political rivals, or his recent praise of Republican Congressman Greg Gianforte who physically attacked a journalist last year.

Jewish residents of Pittsburgh who spoke with Haaretz also expressed concern about Trump’s constant use of phrases that have a history of anti-Semitic connotations, such as “globalist.” In addition, national Jewish groups – most notably the Anti-Defamation League – have warned of the constant attacks by Trump and other prominent Republicans against Jewish philanthropist George Soros, who is portrayed in far-right conspiracy theories as a “puppet master” who secretly controls U.S. immigration policy.

Robert Bowers, the suspected Pittsburgh shooter, shared anti-Semitic conspiracy theories that accused Jewish Americans of trying to flood the United States with illegal immigrants. That theory was very similar to the conspiracy theories targeting Soros – including some that were spread by prominent right-wing, pro-Trump commentators.

Yet almost none of these comments came up in remarks offered by Israeli government officials in the days after the attack. To the contrary, Israeli officials have made sure not to even hint at any form of criticism toward Trump or anyone in his political-ideological orbit. Instead, Israeli officials have thanked Trump for denouncing the incident and ordering U.S. flags in government institutions to be lowered to half-staff.

On Sunday, Dani Dayan, Israel’s consul general in New York, emphasized in an interview on Israeli radio that Bowers had criticized Trump for being “controlled by Jews.” Dayan said the anti-Semitism espoused by Bowers in social media posts was not ideologically different from a November 2012 statement by a Democratic congressional nominee in Minneapolis, Ilhan Omar, who wrote that Israel had “hypnotized the world.”

The consul general arrived in Pittsburgh on Saturday night and was the first Israeli official to visit the community and crime scene. He enjoys good relations with the leaders of the local Jewish community, as well as with Pittsburgh Mayor Bill Peduto. (The city falls under the diplomatic “jurisdiction” of Dayan’s consulate.)

“I like this community a lot,” Dayan told Haaretz during a late-night visit to the Tree of Life synagogue. “It has wonderful and inspiring people. Our job right now is to be here for them and to see how we can support them. When something like this happens to Jews in another country, it is considered an internal issue for Israelis. Whenever Jews are attacked for being Jews, Israel as a country needs to be involved,” he said.

His words were appreciated by the leadership of the local community, but they also clearly showed how different the Israeli reaction to the event has been from the widespread sense of anger among many community members.

But for many Americans Jews, in Pittsburgh and elsewhere, there are other issues that should also be discussed, from gun laws to right-wing extremism and incitement to political violence.

Aaron Bisno, a Reform rabbi at a synagogue located a mile away from the Tree of Life congregation, told Haaretz that he was not surprised by the attack, linking it to “a culture filled with guns and angry rhetoric.” At a vigil Saturday night held not far from the site of the attack, the crowd erupted in chants of “Vote” – emphasizing the importance of next week’s midterms for anyone who wants to see a check on Trump’s rhetoric, or a change to current laws that allow people like Bowers to purchase semi-automatic rifles. Many of the crowd were Jewish residents of the Squirrel Hill neighborhood where the shooting occurred.

When asked how the incident would impact the community, one woman in her 50s, who lives a block from the synagogue, told Haaretz that “it would make everyone here even more likely to vote.”

The woman, whose name could not be transcribed due to a technical difficulty, explained that “this is a voting community. But after this incident, people aren’t just going to vote. They’re going to make sure every person they know is voting. They’re going to do everything they can to put a check on this madness.”

Clearly, Israeli officials cannot be expected to espouse such rhetoric. They are no different in that regard from diplomats from other countries stationed in the United States. For some American Jews, though, the obvious differences between the Israeli response and the widespread Jewish-American response is yet another indication of the widening gap between the world’s two largest Jewish communities.

Following the attack in Pittsburgh, journalist Julia Ioffe wrote, “A word to my fellow American Jews: This president makes this possible. Here. Where you live. I hope the embassy move over there, where you don’t live was worth it.”

Television writer David Simon was more blunt, calling on Israeli Diaspora Affairs Minister Naftali Bennett to stay away from Pittsburgh after the right-wing leader announced his intention to visit the city on behalf of the government. “Go home,” Simon tweeted, adding that Israel’s government had failed the American Jewish community by embracing Trump.

Bennett didn’t take that advice. He arrived in Pittsburgh on Sunday morning, met with leaders and members of the community, and laid a wreath at the site of the massacre. While he was welcomed by most of the community’s leaders, one prominent local Reform rabbi, Jamie Gibson of Temple Sinai, told Haaretz he wasn’t interested in hearing from Bennett.

His reason had little to do with Trump or American politics, though. Instead, it was a protest over the government’s discrimination against non-Orthodox Jewish movements in Israel. Bennett’s party has been supportive of that policy for the entire duration of the current government, despite verbal statements about the importance of respecting the American-Jewish community.

“He doesn’t recognize me and my colleagues as rabbis – certainly not in Israel,” Gibson told Haaretz. “I think it’s hypocritical.” Gibson added he believes the entire Jewish community in Pittsburgh, across all religious denominations, needs to come together at this time.

The difference, he noted, is that local conservative, Orthodox and Reform Jews all acknowledge and respect one another. The Israeli government, however, doesn’t.

Bennett said during a public appearance in Pittsburgh that the shooter did not care “who is who” among the Jews he attacked. Netanyahu expressed a similar message in a previous statement.

The limitations of these statements became clear a day later after Israel’s Chief Rabbinate refused to refer to the Tree of Life congregation as a synagogue, because it isn’t Orthodox. Steven Strauss, a professor at Princeton University, encouraged Bennett in a tweet to “maybe do something about this.” And New York Times Op-Ed staff editor Bari Weiss tweeted that “it’s time for a mass Jewish movement to abolish Israel’s Chief Rabbinate.”

As long as the current right-wing, religious coalition is in power in Israel, though, such a step is nearly impossible.

Israeli officials will continue to express support and solidarity with Jewish communities in the United States at times of tragedy, just like many American Jews do when Israel suffers terror attacks. There is clear potential, though, for the shooting this weekend to have the same impact that the far-right violence in Charlottesville had on Israel’s relationship with the American-Jewish community last year: After the hugs and words of support, the gap between the two sides will only be more clearly defined.