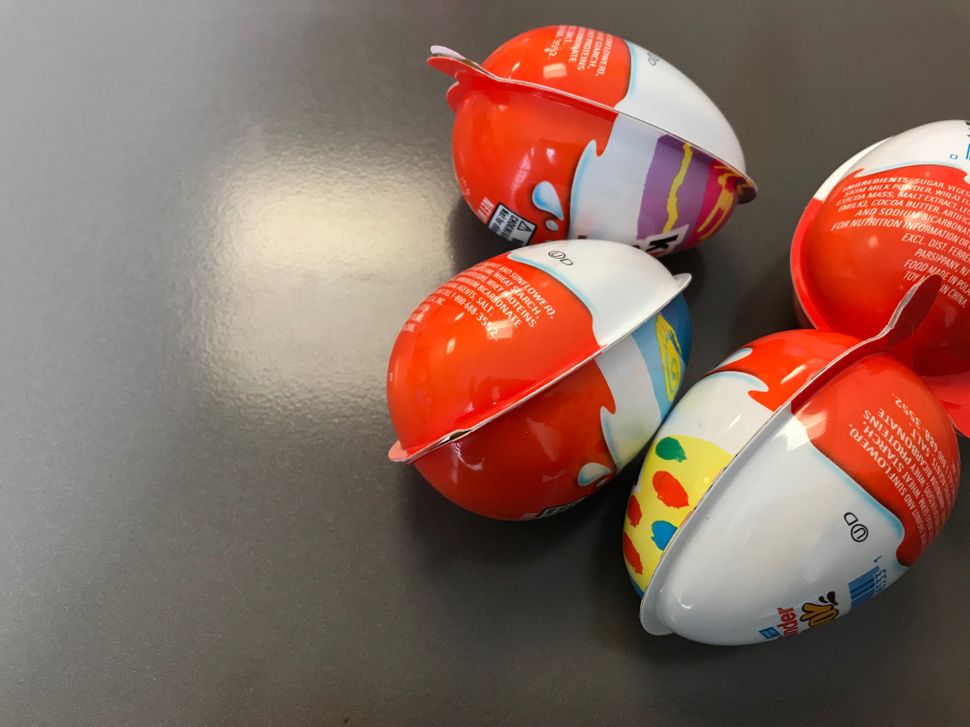 Bezalel industrial design students, whose college is on the Hebrew University campus, can take a course in which they create Kinder egg toys. Image by Helen Chernikoff

Correction, April 5, 11:44 a.m.: [An earlier version of this story stated that Bezalel Academy of Art and Design was part of Hebrew University. In fact, it is a separate entity located on the Hebrew University campus.]

In my family, there used to be an ongoing dispute between me and my kids about the Kinder Surprise eggs, the chocolate treat that comes with a toy prize inside. My kids liked the ones that had lots of tiny parts, and I — as the one who had to put the toys together — liked it when they came in one piece.

Now some of those delightful — or devilish, depending — prizes are being dreamed up close to home by Israelis taking a course in toy design at Bezalel Academy of Art and Design, which shares space on Mount Scopus with Hebrew University that features the involvement of Ferrero Rocher, the candy company whose portfolio of brands includes Nutella, Kinder and Tic Tac.

Yaron Loubatin, who teaches the course, has worked in the toy design world for ten years. He specialized in baby toys including bath toys and feeding toys. He also made some cars for kids, and even some spy gear.

“In my class I always had an exercise of what would you like to find in a Kinder egg surprise,” he said in an interview. “It’s an excellent exercise. You need to design a toy that is very small. On one hand it needs to fit in the toy egg but it also needs to have a surprise effect.”

The course is offered at Bezalel Art Academy, which was founded in 1906 and today has more than 2,000 students studying in departments ranging from fine arts to ceramics to architecture to photography to visual communication. There are graduate degrees in several subjects including Fine Arts, Urban Design, and Industrial Design.

The art school is on the Mount Scopus campus of Hebrew University, with stunning views of east Jerusalem out the windows of the upper floors. In the Industrial Design section, each student gets a work table. The tables are littered with unfinished projects including wheels, wings, and even a spare fake skull or two. 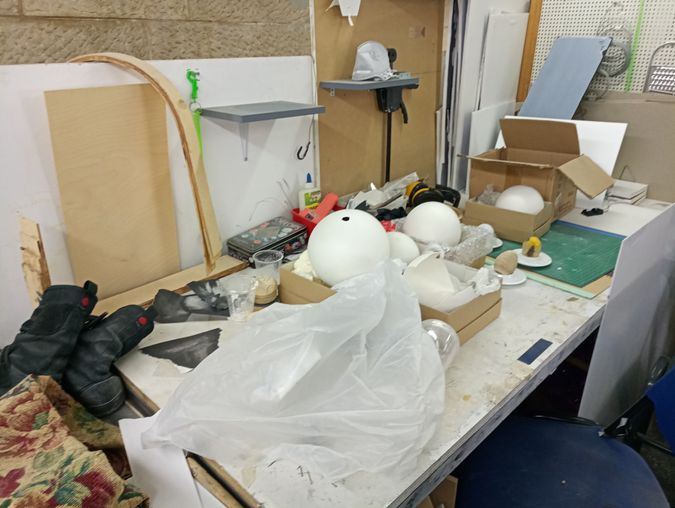 Bezalel industrial design students, whose college is on the Hebrew University campus, can take a course in which they create Kinder egg toys. Image by Linda Gradstein

In the toy design class, which is part of the Industrial Design major, the students not only come up with an idea for a Kinder egg toy, they even build a prototype.

But it is far from an academic exercise. Under an agreement that Loubatin negotiated with Kinder, students pitch their ideas to Kinder representatives, who come to Israel from Italy for the competition. The top three students get cash prizes, with a first prize of 1,500 euro. Kinder also pays the university 9,000 euro for access to the students’ ideas. (The Kinder Surprise egg the Israelis eat and work with is different from the Kinder Joy egg available stateside. The United States doesn’t allow non-food items like toys no matter how hard or difficult to assemble inside food, so the one on shelves in America has the chocolate in one half of the egg and the toy in the other.)

A similar process is done with Lego, although they are even more secretive than Kinder. The connection was made when an alumnus of Bezalel finally landed a job at Lego after trying for three years. Loubatin reached out to him, and a similar process happens in the Lego design class. This year was the second year of the Lego competition, and the winners’ toys are being developed.

All students in the class must sign non-disclosure agreements for both Kinder and Lego, which has a similar arrangement with Loubatin. They are not allowed to give any details of the toys they design, even if their toy doesn’t win.

Loubatin says that both Kinder and Lego ended up buying more toys than they had originally contracted for. While the students get cash prizes up to 1,500 euros, the school gets money that helps create new programs.

Hadar Peretz, 26, a second-year student, won this year’s Lego competition. Without giving details, he said the entire process was a great experience.

“It is really different from anything else here in Bezalel,” he said. “Most of the courses are based on exercises. Being able to work in front of real designers and a real company was a great benefit of the course.”

As part of the project, Loubatin took the students and their prototypes to the kibbutz where he lives, Revadim in central Israel, where he lives, to try out both the Lego and the Kinder toys. 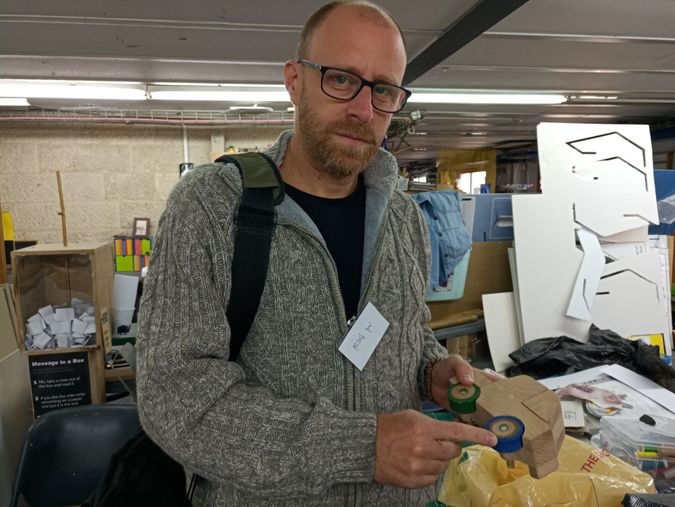 “The students changed their toys quite a bit after that visit,” he said. “In some cases, they realized the way they made it is not clear, or the way they intended it to be used is not fun. In some cases, the kids used the toy in a completely different way. When you go into the field you discover what the customer really needs and wants.”

“It was my first time getting actual feedback from kids who are the ones who are supposed to be using the toys,” Peretz said. “Also getting feedback from Lego was great. We sent sketches and got feedback of what can and can’t work during the whole developing process.”

Lego, which is based in Denmark, but also has development offices in Luxembourg, sent representatives to judge the competition in Israel.

Safi Hefetz, the head of the Department of Industrial Design at Bezalel, says making the toys is an excellent challenge for students.

“We all use the concept of thinking outside the box, but here it is thinking within the box, which is more interesting,” he said. “It is creative work to think within a small space and make something new.”

The students’ first Kinder and Lego toys should be manufactured later this year.

Linda Gradstein is a freelance journalist based in Jerusalem and a lecturer at New York University-Tel Aviv.