That Israeli mom whose rant-video about distance-learning went viral? She’s a special-ed teacher. 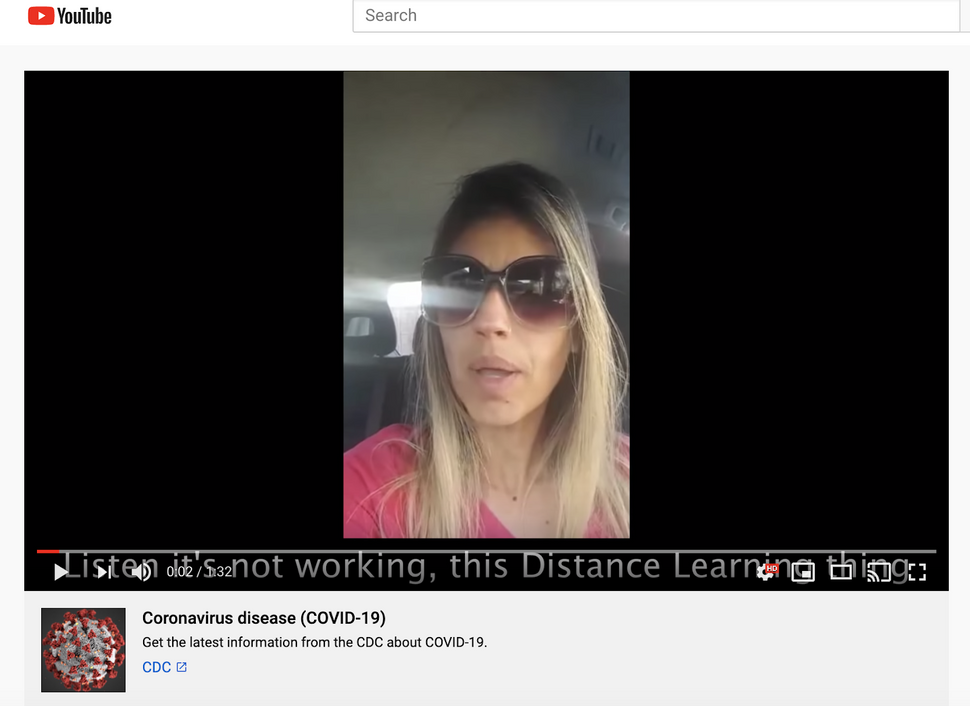 The little video doesn’t feature a celebrity, just an anonymous Israeli woman in sunglasses. It lasts less than 90 seconds, and has no action — just her, straight to camera, recorded in her car of all places, ranting about the new reality of parenting in a pandemic. You’ve probably seen it: it has racked up more than one million views on YouTube alone.

As an American living in Israel, I’m always a half step behind cultural norms, health-ministry directives, my kids’ school assignments. Sheltering in place and distance-learning have made my flawed Hebrew especially problematic. When all my WhatsApp groups posted the hilarious video in which the woman in sunglasses voices all of our collective fears and frustrations, I had to watch it four times to get all the nuances.

Three days later, a non-Jewish friend in the United States sent me the same video, which she received from her famous radio-host boss. Only now it had English subtitles. I was astounded at how this little outburst featuring such a quintessential Israeli archetype had rocketed around the world. I had to find out, who is this woman? And now that the Ministry of Education has halted distance learning because of financial negotiations with the teachers’ union, does she feel at all responsible? I interviewed her by phone on Saturday, and here’s what I learned.

Shiri Keningsberg Levi is 41, and has four kids: Raz (15), May (13), Nir (10) and Guy (8). Her husband, Ziv, manages a large security company, and they live on Moshav Ge-a near Ashkelon. She is not a standup comic, but a special-education teacher. In fact, she won Israel’s prestigious Talma Teacher of the Year Award two years ago, and the prize included a week touring New York City schools. 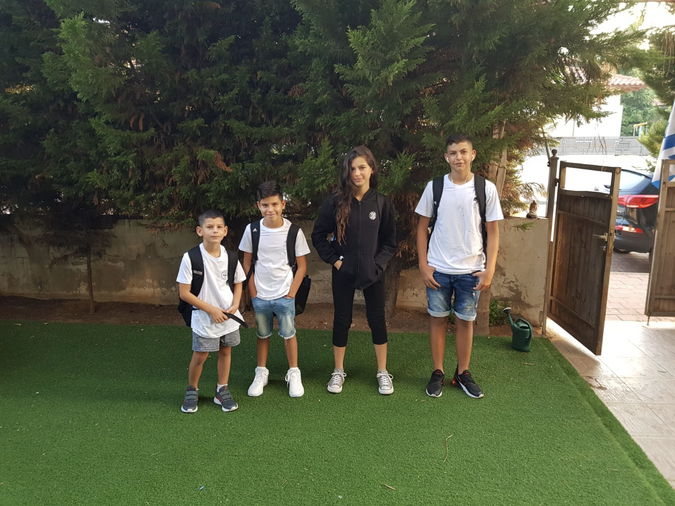 “It was completely spontaneous,” she said of the video. Here are excerpts from our conversation, translated from Hebrew and lightly edited for clarity and length.

Did you expect to go viral?

I post little videos like this often, just for friends on a website called “Mamatzhik.” (Editor’s note: it’s a play on words in Hebrew that translates as Mama Funny.) The videos usually get a few thousand likes. But I never thought for a second — believe me, had I known, I would have put on makeup, and worn a different shirt!

When did you realize how famous you’d become?

I posted to one group of friends, at 4:30 [Ed: on March 14th]. By 5 p.m., the whole country was receiving it from multiple WhatsApp groups. People started calling from the radio stations, TV news, sending messages that it got to South Africa, Berlin, Korea, the whole world. Someone added subtitles in Chinese … Sharon Stone and Elizabeth Banks put it on their Twitter feeds…Yesterday my kids said,“Mom you are famous! You have 3 million views!”

What inspired this video?

My son had just received a flurry of assignments on WhatsApp. With four kids, I’m part of all these WhatsApp groups. I’m constantly looking at the group name, “Wait a second, which kid is this for? Which class?,” so I don’t make an embarrassing mistake. I said to my son, “What are you supposed to do here?” He looks at me, “Mom, how am I supposed to know?” Then I realized how absurd it all is.

Why were you in the car?

My son refused to do his schoolwork and only wanted to play soccer. My daughter was yelling that she couldn’t hear her teacher on the computer. I grabbed my keys, escaped for two minutes to the car, recorded, posted, and went back inside. It was completely spontaneous.

I think people understand that, first of all, it’s humor. We have to laugh at this. Don’t forget that I am a teacher also, and even though it’s different in special education, I still post assignments for my students and check their work.

But when my daughter watches her teacher on the computer and then gets overloaded with three assignments, and my son doesn’t understand his math assignment, and two of my kids are between eight and 10 so they can’t do their work alone… and of course not every kid has a computer or phone.

I understand the need for distance-learning and I really am for it, but it’s important not to overload. Some kids can advance with distance learning, but when, with God’s help, we get back to the routine, some students will come back less prepared. There is nothing to be done.

Living near the Gaza Strip, you must have special experience with distance learning because of all the time spent in bomb shelters.

In Asheklon we really know about distance learning since our kids’ routines get interrupted often. It’s a terrible situation, but this is completely different. Yes, you have the anxiety, but everyone always knows that there will be breaks in the firing, and you’ll go back to your friends and your activities. Now it’s all question marks, which is causing stress. Everything is closed here, we haven’t left the house for eight days. I left once to do a TV interview. We’re getting white hair.

You just did a commercial for the Israeli telecom company Partner. Could you make a new career of comedy?

I was always funny. For as long as I can remember: in school, in the army, I’ve been doing toasts at friend’s events for years. But I love my job as a special-education teacher so much, I never did anything serious with comedy. But when a kid comes to my class late, I write a song about him, so he really regrets it.

In all your videos, why do you always wear sunglasses?

The truth is that I did the first videos in the car, and it was sunny. Now the sunglasses are how people know me, and if I take them off people won’t recognize me. But I also really love sunglasses, I have about a 100 pairs.

How is your family different than the one in which you grew up?

I’m one of three children, my paternal grandparents were Polish Holocaust survivors, and my mother’s parents are Bulgarian and Yemenite. A real mix. My father died when I was 13, so holidays were small. I dreamt of having six kids, but gave up after four.

Do you think parenting is harder now than it was for your mother?

Of course! My mother would tell me to do something and I would do it! Seriously, there wasn’t the issue of technology, you can’t compare. I am very anxious about the things my kids may see on television or the phone; my mother just played Monopoly with us.

Congratulations on winning the prestigious Talma Teacher of the Year award. What did you think of education in New York?

This was the most exciting experience of my life. A gift from God. The American schools are amazing. Everything was orderly, respect for the teachers, two teachers per class. It was so unbelievable. I visited a school in Harlem where they teach Hebrew, and I didn’t see a single Jew [Editor’s note: this is the Harlem Hebrew Academy, a charter school]. Amazing. And I wish we had those school cafeterias! They create real community in the school.

What is your advice for American parents sheltering in place?

Have a house full of smartphones so the kids will keep quiet. Stock up on cornflakes and milk so you won’t have to cook.

Seriously, I recommend family games. In reality, who has time to sit and play games? My kids each have at least three after-school activities every day. My husband and I are chauffeurs, always coming and going. Suddenly we’re all together, and even with the arguing, and even though it’s hard, there are moments when I’m thrilled. Yesterday we played Rummikub for two hours.

What makes you the happiest?

I’m getting fan letters from famous people that touch my soul, but what really thrills me are letters from a lady who has cancer. I don’t know her personally. She is in a hospital oncology ward. She wrote that whenever she feels depressed she puts on one of my videos. She writes, “Shiri, you save me.” I thank God for the honor of making her laugh. That is bigger than fame and everything else, I can cry with happiness.

I just hope that I can always be funny and entertain people. Everything else is unimportant, I live just to make my students and family and others laugh.

Ilana Trachtman, an Emmy award-winning documentary filmmaker, is spending the year in Tel Aviv with her husband and two daughters. She is working on a documentary about Jewish-Black collaboration in a 1960 civil-rights protest.

That Israeli mom whose rant-video about distance-learning went viral? She’s a special-ed teacher.