Savoring a last hour at the beach, as new coronavirus rules descend on Israel 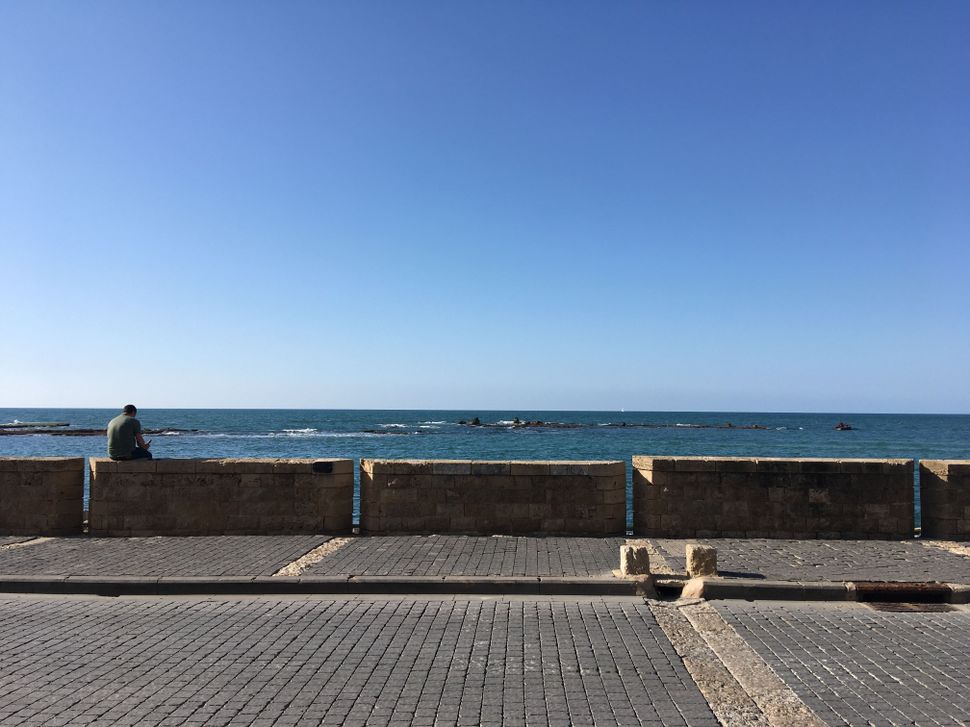 As new coronavirus restrictions clamped down on Israel, a man snatched a last, appropriately solitary hour on the beach. Image by Naomi Zeveloff

When Israel announced its latest coronavirus restrictions on Wednesday afternoon, I immediately pulled on my sneakers and headed to the beach. I live in Jaffa, about 10 minutes by foot from the water, but the new rules — which were coming into effect two hours later — would only allow us to venture 100 meters from our homes. That’s about 330 feet, which is roughly the distance to our block’s communal recycling bin.

Living by the Mediterranean is one of the perks of being a foreign correspondent in this tiny and claustrophobic country. After I am done reporting a story, I sometimes take a walk by the water to think through the structure before I return home to write. These days, when I’m doing most of my reporting by phone, my daily walk is my exercise. I don’t take my access to the sea for granted. Palestinians in the West Bank need a permit from the Israeli army to get to the beach. And while most Israelis live in the general area of Tel Aviv and its famous beaches, few are walking distance from the shore like I am.

The restrictions are only supposed to last a week. But the way things are going, I won’t be surprised if the timeline is extended. In Israel, coronavirus infections are rising quickly, with more than 2,500 sick and five dead. Israeli Prime Minister Benjamin Netanyahu keeps threatening further lockdowns. Though I was on deadline for a story, I decided I needed to get to the water while it was still possible.

I walked to the closest beach, near Jaffa’s historic clock tower. It’s a spit of dirty sand with a “no swimming” sign which everybody ignores — not glamorous. Yet there were plenty of other people there with the same idea that I had: visiting the beach for the last time, until who knows when. It was a perfect last day. The weather was unusually warm; the sky was clear. After spending a few minutes staring into the turquoise waves, I pulled my phone out of my pocket and turned on the voice recorder. Holding it in a gloved hand, I approached the nearest group for a socially-distant interview.

Rona Abramovsky was practically piled on top of three other friends, disregarding Israel’s rules to maintain a six-foot distance from others. She told me the group was worried about being stopped by the police, but decided to come to the beach anyway. Attitudes like hers might be what led Israel to pass these latest restrictions; last week, Netanyahu chided Israelis on Facebook for gathering on beaches like they were on “vacation.”

A man and woman were strolling lawfully. They live 10 minutes from the beach; like me, they would have to give it up. “I’m depressed,” said the woman. “It’s a really nice day.” They had just exited a mandated two-week home quarantine following a snowboarding vacation in France. Now, they would be stuck back inside. But they were looking at the bright side. They have a balcony, with a view of trees.

Nearby, Eva Razgon was sitting too close to a friend. She said she didn’t know about the latest regulations. She had been fired from her job managing a restaurant, but she had a Tel Avivian’s insouciant calm: “I think everything happens for a reason.”

I looked back at the waves, and then returned home, sand in the tread of my shoes. When I sat back down at my desk, I contacted the most beach-loving Israeli I know. Alex Farfuri is a Tel Aviv photographer who spends her days there, taking pictures of Israeli retirees as they lounge in the sun. I asked her what it means that almost no Tel Avivian will have access to the water.

“Life here in Israel is always on the edge,” she wrote me in a text. “People are always stressed about money, work or politics.” The beach is a way to “forget and enjoy the moment.” It’s going to be hard, she predicted, especially when the sun is out.

But if keeping off the beach keeps people safe, then that’s what Israelis have to do, she added. “I’m an optimistic person and I know that I will get to see the ocean again.” Sitting inside my apartment as the darkness fell, I tried to let her optimism wash over me. I hope I get to, too.

Naomi Zeveloff is a freelance journalist based in Jaffa.

Savoring a last hour at the beach, as new coronavirus rules descend on Israel