Palestinian protesters perform the Friday prayer behind national flags during a protest against a US brokered Middle East peace plan, outside the West Bank village of Tamun near the Jordan Valley, on January 31, 2020. Image by Getty Images

Israeli Prime Minister Benjamin Netanyahu has set Wednesday as the date when he might begin a process of unilaterally annexing sections of the West Bank — land that Palestinians see as illegally occupied and the heart of their future state.

It is more than 2,100 square miles that has been fiercely disputed through decades of failed diplomacy, and many international experts see the potential annexation as a death knell to the two-state solution. Israel captured the West Bank from Jordan after it came under attack during the 1967 war, and has since blanketed parts of it with settlements housing nearly 500,00 Israeli Jews. But under the Oslo Agreements of the mid-1990s, Israel and the Palestinian Authority divide governance in the area. 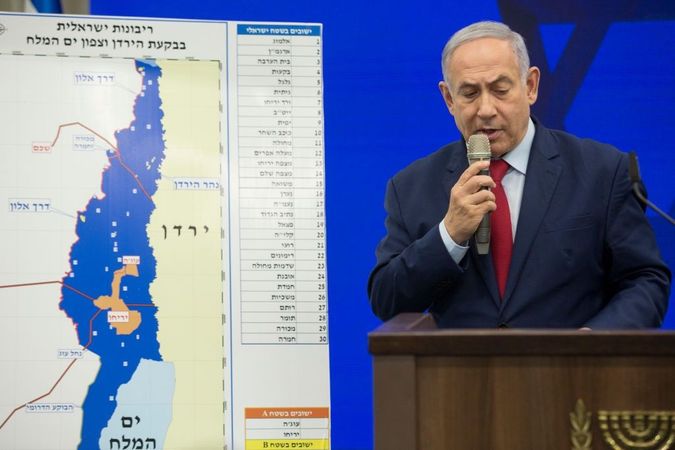 Netanyahu’s announced plan to formally exert Israeli sovereignty over the territory came after President Donald Trump in January unveiled his peace plan, including permission for Israel to annex up to 30 percent of the West Bank. More recently, the White House has been sending mixed signals about its support for any such unilateral moves, nearly 200 pro-Israel members of Congress have signed a letter urging the Israeli government to reconsider.

At the same time, Secretary-General Antonio Guterres of the United Nations has said annexation would not only be against international law, but it could destabilize the region.

It remains unclear whether Netanyahu’s coalition will actually move forward, as defense and economic officials have been warning against annexation, citing the mayhem that could follow. The Palestinian leadership has promised to respond to even partial annexation by abandoning Oslo, forcing Israel to take direct responsibility for 2.7 million Palestinian residents of the West Bank.

Even Israel’s friends warn that annexation could transform Israel from a democracy into an apartheid state. The fallout could include the end of Israel’s peaceful relations with Jordan and Egypt; Gulf leaders breaking off burgeoning ties; and the Palestinian people staging a new, violent uprising.

As the days tick down, no map or firm plan for what this annexation might look like has emerged, although Israeli media is reporting it appears Netanyahu is considering a more symbolic type of annexation – one limited to declaring sovereignty over Jewish settlement in the Maaleh Adumim area, on the edge of Jerusalem.

During this time of extreme uncertainty and anxiety, we asked six Palestinians to share their perspectives on this phase of the long-running conflict.

‘Something totally unknown hurtling toward us’

Mahmoud Hmedat, a civil engineer in the West Bank city of Jericho, does not like the term annexation. “It’s re-occupation, not annexation,” he said. 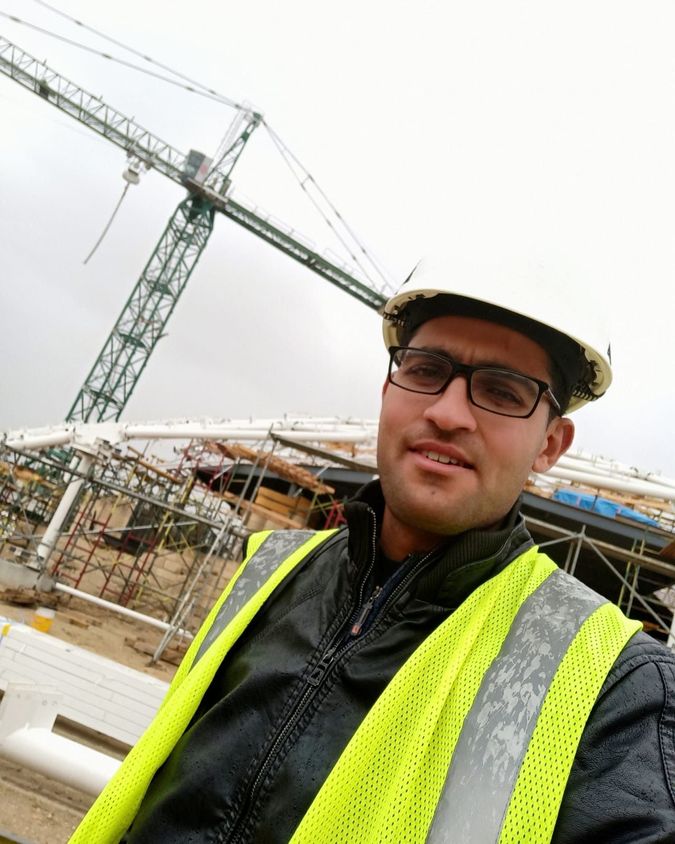 Mahmoud Hmedat Image by Courtesy of the subject

For Hmedat, who is 26, the uncertainty of the moment is hard to bear: “It’s like something totally unknown hurtling towards us.”

Most of all he’s worried. Worried about the economic fallout – will farmers around Jericho be able to get enough water? Worried about confiscation of Palestinian land.

Until Trump entered the White House, Hmedat said, he had held out hope that a two-state solution might being in reach. Now it seems like an impossible dream.

Whether a resolution comes in one-state or two-state form matters ultimately matters less to him at this point, he said, than what he calls “freedom for all people.”

“We want justice for everyone and by that I mean the Palestinians, the Israelis,” he said. “We need to offer everyone the same rules, the same services, the same conditions – that’s the only way peace will ever be possible.”

‘We live in it already — this one-state reality’

Hamada Jaber, 37, who lives in the West Bank city of Ramallah and is the co-founder of the One State Foundation, sees opportunity in this moment. He is hoping the Palestinian leadership will adopt a new strategy and abandon the two-state solution in favor of one-state for two peoples, with equal rights for all. 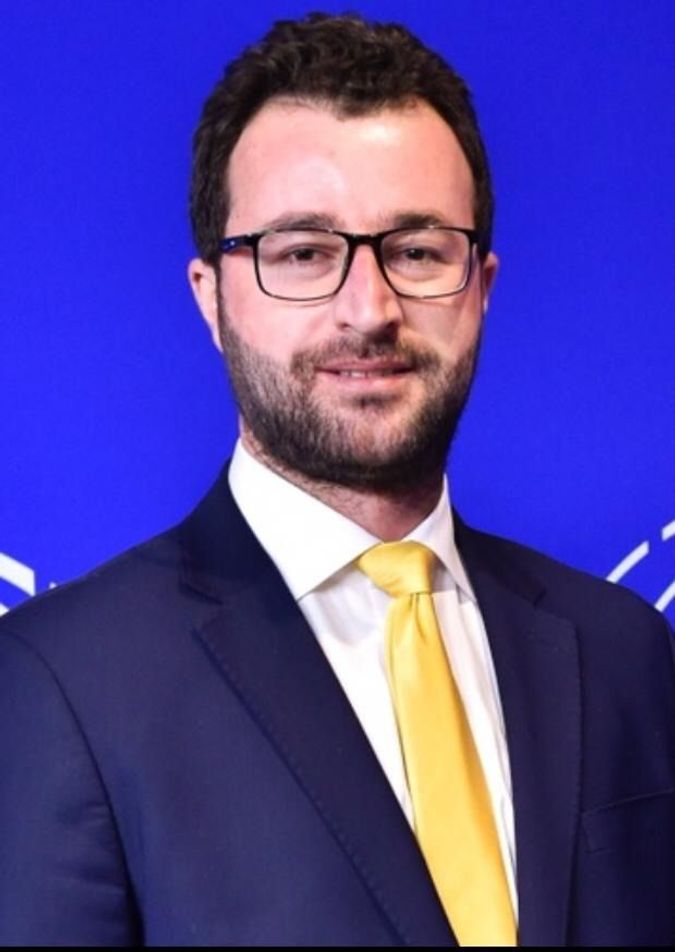 Annexation may only be about to happen formally on some portion of the West Bank, but Jaber said that, de facto, it’s been happening for decades through the building of Jewish settlements and appropriation of Palestinian land. That, he argues, has let the international community and the Israeli public grow complacent – to stick with what he describes as the fiction of an actual path to two states as outlined in the Oslo Peace Accords.

“Israel and now Trump is essentially telling everyone, there is no two-state solution,” he said.

“Netanyahu said even if he annexes areas where there are Palestinian inhabitants, we will not have any rights or citizenship in Israel. In my opinion this will create an officially kind of an apartheid state of Israel – an official one recognized by law as it exists as it is already.”

This is where the opportunity comes in, he argued, saying what should come next is that the Palestinian Authority dissolve. Jaber believes this would force Israel into an unflattering international spotlight of controlling Palestinians it does not enfranchise and force the hand of the only solution he sees as viable: one state for Jews and Palestinians.

“We live in it already — this one state reality, what we need to do is give equal rights to everyone,” he said. “That means the end of the Jewish state and the start of one democratic state with equal rights for all.”

How to make this palatable to Jewish Israelis? His answer: a strategy of non-violence in which the Palestinian Authority would not only stop governing parts of the West Bank but would also turn in all Palestinian weapons and send the message that Palestinians don’t want to fight or kill anyone, but do demand their rights.

‘Israelis themselves will speak out against annexation’ 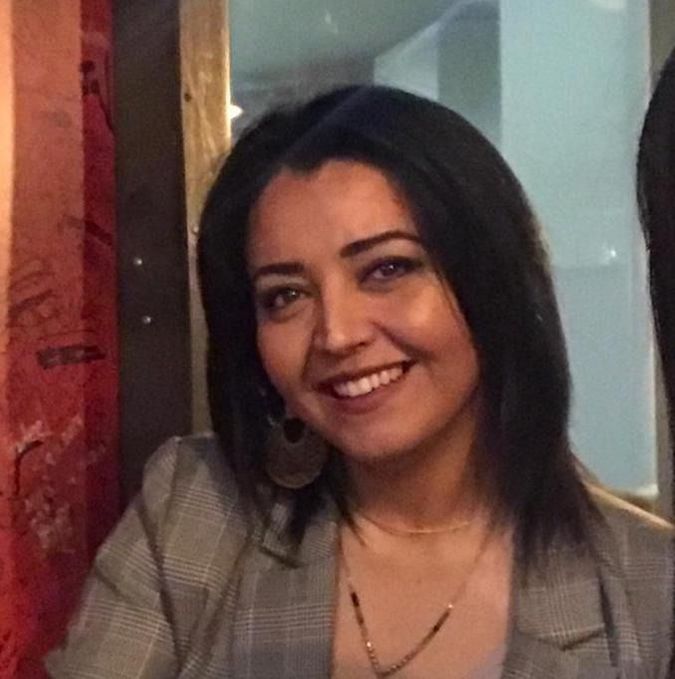 Nivine Sandouka Image by Courtesy of the subject

Nivine Sandouka, who is 37, remembers being a 10-year-old girl watching on television as the the Oslo Peace Accords were signed on the White House Lawn in September, 1993. She was living in the Shuafat neighborhood of East Jerusalem, and there was a feeling of immense relief, she said, after so many years of violence: her family headed into the streets, where people passed out sweets in celebration.

Now an aid worker in East Jerusalem, Sandouka looks at the approaching annexation – even the talk of it – and feels resigned to what to her has been a long-standing reality of Israeli unofficial control of Palestinian lives. The difference is, she said, “like coming out of the closet to say it’s there.”

Sandouka wondered about the impact on her own family and other residents of East Jerusalem who own homes in Jericho, a West Bank city. Would they be able to travel back and forth freely there – or to other parts of the West Bank?

Sandouka is also concerned for the potential economic impact East Jerusalem residents who own businesses in the Jordan Valley, an area Netanyahu has spoken specifically of annexing.

Such a move, she said, puts Israel in the position of being “an occupying power responsible for the people it occupies.”

“Once Israel feels the financial pressure that goes with that, Israelis themselves will speak out against annexation and will ask for two states,” she predicted. Two states. possibly with open borders, Sandouka said, is the ideal solution because she does not see a scenario of true reconciliation needed to live together as citizens in one bi-national state.

‘Americans OK’ing it does not make it legal’

Husam Jaber works as a tour guide in the West Bank city of Bethlehem — or he did until the coronavirus hit. After months being out of work because tourism has vanish, Jaber, 49, sees annexation only adding to the economic hardship of the moment.

“People’s main concern is the economy, they want to live in peace and have money,” he said.

“I don’t think there is much I can do,” Jaber added, “and I feel sad, helpless that on both sides people are suffering. If there is violence, more people will suffer.”

Jaber is also angry with the Americans: “Americans OK’ing it does not make it legal,” he said of annexation. “What Israel is doing is illegal by all standards.”

He’s agnostic on the form a future solution should take.

“Identity is something constructed – I don’t think of nationality, I am more focused on whether or not my kids will have equal rights,” said Jaber, a father of four. “That’s better than having a nationality.”

‘We need a plan for their future’ 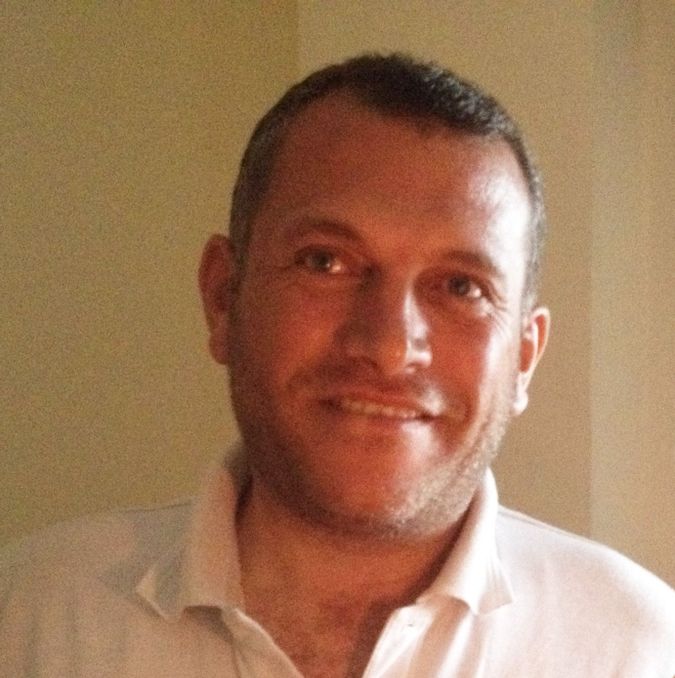 Ashraf al-Masri is a 45-year-old taxi driver in the Beit Hanoun neighborhood of the Gaza Strip whose three-story home was flattened during Israeli bombing raids in 2013. He said that he is still trying to hold onto the idea the Palestinians might have their own state alongside Israel, but that the increasingly real prospect of annexation is testing his resolve.

“I’m angry, this time things are very bad — and it feels like people don’t care,” he said, referring to the international community, including Arab nations.

Palestinians like himself, in Gaza, will pay an economic price as well, Al-Masri fears. If the Palestinian Authority, based in the West Bank, dissolves itself the aftermath of annexation as President Mahmoud Abbas has promised, that would mean halting payments to workers and institutions in Gaza. If that happens, he worries that Hamas, the Islamist faction that rules Gaza, would be unable to pay thousands of people’s salaries and the economy, which is already in dire straits, could completely crash.

Time is something Al-Masri feels he no longer has. He is thinking about his nine children, some of whom now have their own children: “We need a plan for their future.” 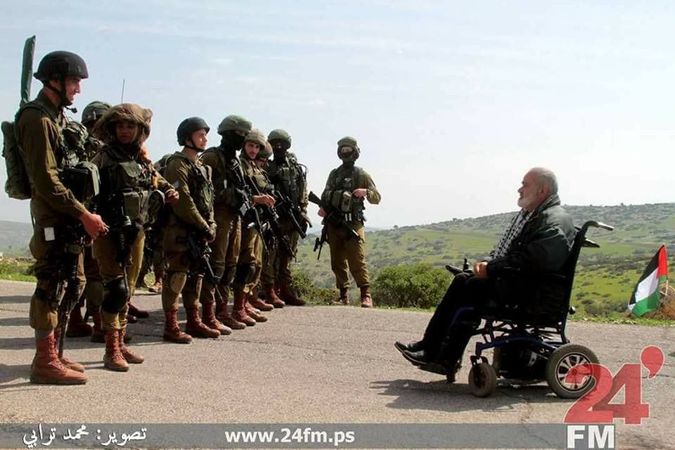 Sami Sadiq Image by Courtesy of the subject

As mayor of al Aqaba, a town in the Jordan Valley, Sami Sadiq, 63, has a lot to lose if Netanyahu pushes ahead with annexation: his part of the West Bank is among the most likely to be annexed at some point.

“If Netanyahu wants peace – why is he doing this? Where are the Palestinian people supposed to go?” asked Sadiq, 63, whose family has lived in the small village for generations. “We want peace.”

He said he has been in a wheelchair since 1971 when, as a 16-year-old, he was struck by three bullets shot by Israeli soldiers training nearby.

“I don’t know what the future will be if Netanyahu constantly refuses to go towards peace,” he added, pointing to the guest house in his village, and explaining that he is always urging Israelis to visit — usually without luck.

“They say they are afraid,” he said. “But you can’t have peace if you don’t know each other.”