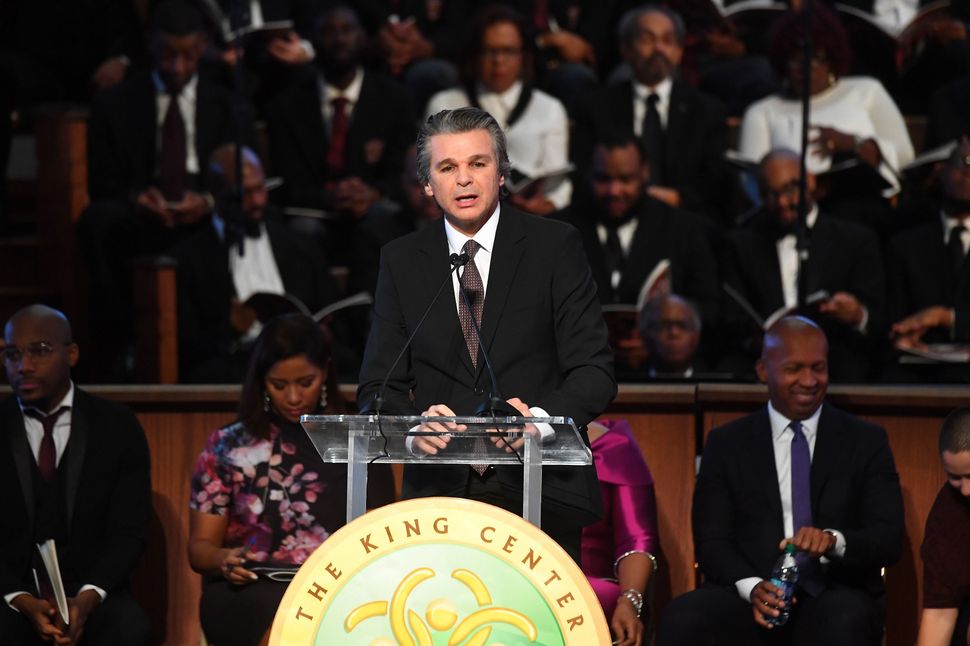 Two evangelical leaders with close ties to the Trump administration and the Israeli government are entangled in a legal dispute over millions of dollars that were allegedly raised to support Holocaust survivors in Israel.

The dispute has led to the filing of a lawsuit in the state of Georgia, and could lead to legal action in Israel in the future.

At the heart of the dispute are several joint projects that two evangelical pastors from the United States jointly tried to promote in recent years.

Mike Evans, a prominent evangelical activist and founder of the Friends of Zion Museum in Jerusalem, is suing Pastor Jentezen Franklin – a member of President Donald Trump’s unofficial group of evangelical advisers – and seeking over $3 million in damages.

Evans claims in the lawsuit that between December 2017 and August 2019, he and Franklin cooperated in raising funds for a series of projects meant to support Holocaust survivors in Israel, including the construction of a community center and a food kitchen in Jerusalem.

According to the lawsuit, as part of their fundraising efforts the two agreed that donors recruited by Franklin who provided $1,000 or more would be recognized in a special “donors’ wall” at the center upon completion of its construction. Evans claims that in August 2019, Franklin provided him with a list of such donors and that, according to his calculations, the overall sum raised by those donors – as shown on the list – was more than $4 million.

Evans argues, however, that Franklin only provided about $1.2 million in actual donations for the Holocaust projects.

Franklin strongly denies these allegations. His office told Haaretz that there was never any legal agreement between Franklin and Evans, and that the lawsuit has no basis whatsoever.

Evans’ lawyers detailed their version of events in the lawsuit. “On August 26, 2019, an associate of Franklin delivered an email to Churches United [Evans’ nonprofit organization] containing a list of donor names meeting the minimum donation requirements for the Projects,” the lawsuit states. “Attached to the email were two Excel spreadsheets segregated into categories of minimum donation amounts for the Projects of either $1,000 or $10,000.

“The lists reflected a minimum of $1,000 from 4,215 donors and a minimum of $10,000 from 32 donors toward the Projects,” it states. “These donation lists reflect total minimum donations of $4,535,000. Consistent with the Projects and agreement between the parties, a ‘donors’ wall’ was constructed by Churches United, and is located on the Property. To date, Defendants have transferred the total sum of $1,200,000 to Churches United for the Projects.”

In response to a query from Haaretz, Franklin’s office said: “Pastor Jentezen Franklin dedicates his life to charity, justice, and doing good. He works exhaustively to support lower socioeconomic and vulnerable social groups throughout the world, including Holocaust survivors and children who are victims of terror in Israel.

“In this framework, Pastor Franklin undertook fundraising campaigns for Holocaust survivors and victims of terror, including support for organizations managed by Mr. Mike Evans. Pastor Franklin also raises support for other organizations in Israel including JNF USA Fortified Playschool at the Gaza border and Yad Ezer La Haver, which provide housing, meals, equipment and medication to Holocaust survivors on an hourly basis year round.

“No legal agreement exists between Pastor Franklin and Mr. Evans or his organizations, nor has one ever existed with Mr. Evans. Therefore, there is no basis whatsoever to the legal claim in question.”

Franklin’s response ended by stating, “It appears that Mr. Evans has elected to engage in a malicious smear campaign against Pastor Franklin to gain the perception of leverage in a meritless lawsuit. We regret that, instead of working together to support the noble cause of assisting Holocaust survivors in their final years, Mr. Evans chose to go down the path of dispute and strife. Pastor Jentezen Franklin will continue his relentless work for justice all over the world, including in the State of Israel.”

Evans also claims in the lawsuit that Franklin is continuing to use Evans’ name, his organization’s name and the abovementioned projects for fundraising purposes, but that the donations raised go to other purposes. Franklin also denies this allegation.

He also alleges that Franklin “represented to the public that the Prime Minister of Israel, Benjamin Netanyahu, requested Franklin support the Projects,“ something which he says is not true. Franklin completely denies both accusations.

One argument Franklin could try to make in defense is that the fundraising effort took place over a period of 20 months and that there were costs involved in raising the funds, such as securing air time on television, initiating direct mail solicitations and putting up content online. Evans’ lawyers, however, insist that this does not explain the difference they observed between the donor spreadsheet and the donations actually forwarded from Franklin. The main argument from Franklin’s side is that the two never signed any actual agreement on the subject.

Both Franklin and Evans have had close ties for many years with senior officials in Israel, including Netanyahu and, in Franklin’s case, the late President Shimon Peres. Both are also considered close to the Trump administration and involved in evangelical efforts to steer Trump’s policy toward supporting the Israeli government.

Evans, however, has recently adopted a more critical stance because Trump’s Middle East plan makes reference to a Palestinian state, and also because the White House has so far not given Israel a green light to move forward with unilateral settlement annexation. He has gone as far as saying that if Trump won’t support annexation and if his administration promotes the creation of a Palestinian state, that could cost him the evangelical vote in November – and with it, the entire election.