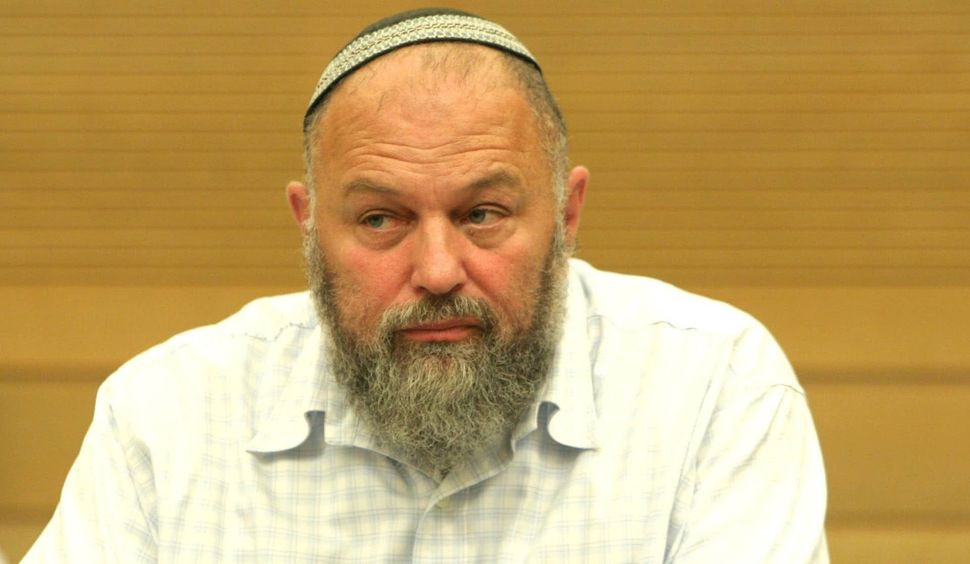 The plan to appoint a former far-right politician and military commander as chairman of Yad Vashem has sparked outrage among prominent Holocaust survivors in Israel, the organizations that represent them and members of the so-called “second generation.”

Effi Eitam, a former lawmaker and leader of the now-defunct National Religious Party, who has called for the expulsion of West Bank Palestinians and the ouster of Israeli Arabs from the Knesset, was recently nominated for the high-profile post by Prime Minister Benjamin Netanyahu and Zeev Elkin. Elkin is a Likud cabinet minister whose portfolio includes jurisdiction over Yad Vashem, the national institution for Holocaust remembrance, in Jerusalem.

Before his appointment comes up for a final vote in the cabinet, Eitam, whose record as a high-ranking officer in the Israel Defense Forces has been shrouded in controversy, must be vetted by a special committee tasked with screening candidates for top jobs in the public sector.

Yad Vashem is considered an obligatory stop on any trip to Israel and a well-known site of pilgrimage for visiting dignitaries. The institution has confronted serious financial problems in recent years, aggravated by the global pandemic, which has forced it to shut its doors to the public. 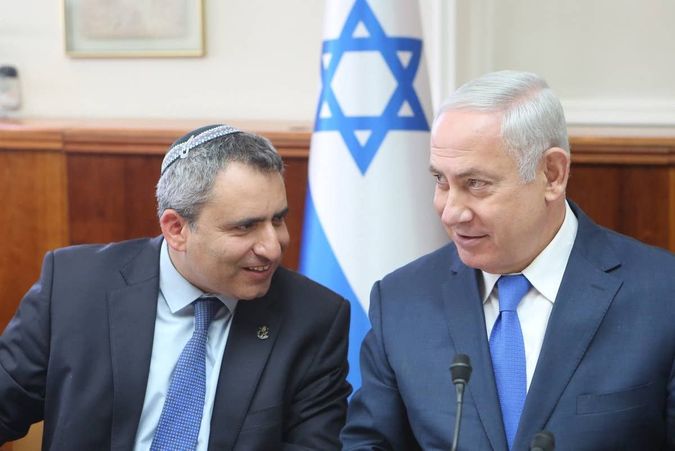 In letters sent earlier this month to Netanyahu and Elkin, Colette Avital, head of the Israeli umbrella organization of Holocaust survivors, urged them to reconsider their candidate for the post without specifically mentioning Eitam’s name.

“We, who represent a wide spectrum of opinions, believe that the criteria for choosing a chairman must be professional and devoid of any political considerations,” wrote Avital, chairwoman of the Center of Organizations of Holocaust Survivors in Israel. The former Israeli diplomat, who also served as a Labor Party lawmaker, noted that the center represents 58 organizations and tens of thousands of Holocaust survivors.

“This is a position that requires a variety of skills, starting with a relevant personal background, sensitivity and a comprehensive knowledge of the subject, to be followed by organizational skills, and culminating with the ability to communicate with international dignitaries and to raise funds,” she wrote.

Speaking with Haaretz, Shraga Milstein, chairman of the Israeli Association of Bergen-Belsen Survivors, said that Eitam was “unfit” for the post. “This is a job that requires someone who is familiar with the subject of the Holocaust and has a proven record of running an academic institution of the likes of Yad Vashem,” he said.

Not only did Eitam not meet these qualifications, he added, but his inflammatory statements against Arabs and Palestinians should have already disqualified him. 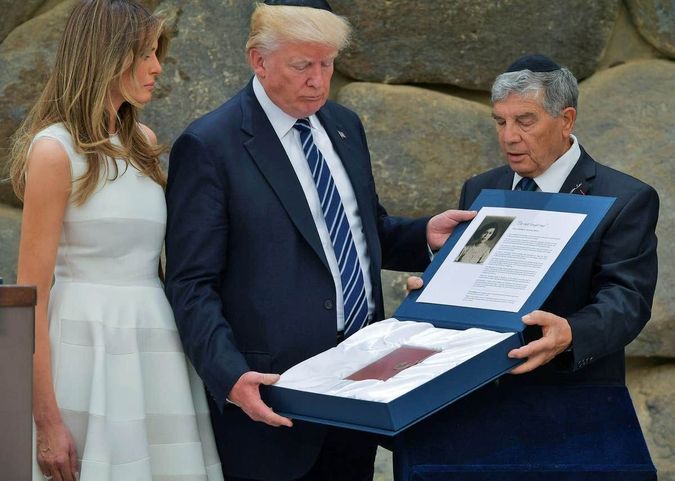 Donald and Melania Trump stand next to Chairman of the Yad Vashem Holocaust Memorial, Avner Shalev, during a ceremony at Yad Vashem, May 23, 2017. Image by Mandel Ngan/AFP

“He is not a man who regards everyone as equal, which is a basic assumption for anyone running an institution like Yad Vashem,” said Milstein, 87, the former mayor of Kfar Shmaryahu, north of Tel Aviv. “As we know, the Holocaust didn’t start with gas chambers. It started with differentiating between people and seeing some people as unequal to others.”

Eitam, 68, is intended to replace Avner Shalev, who has served as chairman of Yad Vashem since 1993 and recently announced his plans to retire at the end of the year. Shalev had served as the IDF’s chief education officer, and before assuming the helm at Yad Vashem, he headed the Culture Authority at what was then the Ministry of Education and Culture. Shalev’s predecessor was Yitzhak Arad, a historian of the Shoah and survivor himself, who led the institution for 21 years.

Born on Ein Gev, a secular kibbutz on the shores of Lake Kinneret, Effi Eitam embraced a rigidly Orthodox lifestyle after the 1973 Yom Kippur War. Married with eight children, he currently lives in an agricultural community in the Golan Heights and heads the Israeli subsidiary of New Jersey-based Genie Energy.

In the late 1980s, during the first Palestinian intifada, Eitam commanded the Givati infantry brigade. Four of his soldiers, convicted in a military court at the time for beating to death a Palestinian prisoner, testified that they were following his orders, subsequently earning Eitam a sharp reprimand from his superiors. After his retirement from the IDF in 2000, Eitam joined the National Religious Party. Between 2002 and 2004, he served as minister of national infrastructure in Ariel Sharon’s government. He quit both the government and his party, though, when Sharon announced his plan – implemented in August 2005 – to pull Israel out of the Gaza Strip.

In 2006, while addressing a memorial event for a fallen soldier, Eitam drew fire when he said: “We’ll have to expel the overwhelming majority of West Bank Arabs from here and remove Israeli Arabs from the political system.” He referred to the Arab minority in that speech as a “fifth column” and “a group of traitors.” Menachem Mazuz, who was attorney general at the time, warned Eitam that he could face criminal charges if he repeated such statements.

Haim Roet, a Holocaust survivor and the initiator of the commemorative project “Unto Every Person There is a Name,” has written both to Netanyahu and Defense Minister Benny Gantz, himself a child of Holocaust survivors, imploring them to reconsider the appointment of Eitam.

In his letter to the prime minister, Roet warned that Netanyahu would be playing into the hands of “haters of Israel, antisemites, Holocaust deniers, and promoters and supporters of the BDS [boycott, divest and sanctions] movement” if he were to name an individual who has been publicly reprimanded for his behavior toward Palestinians to this sensitive position.

“Let’s not forget that the main struggle over the memory of the Holocaust takes place outside Israel, and appointing someone already deemed unacceptable to parts of the Jewish nation in the Diaspora, as well as to the non-Jewish world, will not go down well,” wrote Roet, who serves as chairman of the public committee for the recognition of Jews who rescued other Jews during the Holocaust.

Defending the appointment, Elkin told Haaretz that Eitam would not be the first individual with a political background to assume a position of power at Yad Vashem.

“I don’t accept this argument that someone who came from politics can’t fill a position in Holocaust commemoration,” he said. “I think people who come from politics – whether from the left or the right – have a lot to contribute. To fill this position, I was looking for a well-known name, someone who knows how to operate in the corridors of power. This is a man who served as a government minister and as the head of a political party. He has administrative experience, and even if there is some criticism about particular things he did in the army, when you look at his entire career in the IDF, he was one of its most distinguished commanders.”

Elkin explained that he had put together a list of several candidates for the position, and that he and Netanyahu had reached an agreement on Eitam. According to widespread speculation, the prime minister was hoping the appointment might help improve his popularity within the religious nationalist community. Naftali Bennett, the official leader of this community in the Knesset, has been posting dramatic gains in recent polls against Netanyahu.

Elkin denied that Eitam’s appointment was motivated by such considerations. “Nonsense,” he said. “I can’t imagine there is anyone torn between Likud and Bennett who would make a decision based on the identity of the chairman of Yad Vashem.”

Asked to comment on the opposition to his appointment, Eitam said he was unaware of any. “I wasn’t the one who recommended me for this job,” he told Haaretz, “and I have nothing to add.”

Prominent representatives of the second-generation community – that is, children of survivors – have also voiced fierce objections to Eitam’s appointment. Menachem Rosensaft, the founding chairman of the International Network of Children of Jewish Survivors, warned that it could compromise Yad Vashem’s moral authority.

“Holocaust remembrance by definition requires a voice that is opposed to racism, xenophobia and persecution of all minorities,” he said in a phone conversation from his home in New York. “Yes, Yad Vashem focuses on the remembrance of the Shoah. However, it does not do so in a vacuum, and its chairman ought to be a person of impeccable credentials in this respect, who is not subject to attacks based on statements that he has made in the past that are by definition hostile to Israel’s Arab minority and hostile to the Palestinians as Palestinians.”

Rosensaft, who teaches courses in genocide at both Columbia University Law School and Cornell Law School, wondered why Israeli government leaders would consider appointing as Yad Vashem chairman an individual who, he added, is sure to serve as a “lightning rod.”

“I just don’t understand it,” he said.

Dorit Blitenthal, a member of the board of Amcha, an organization that provides psychological assistance to Holocaust survivors in Israel, called it a “terrible appointment.”

This article appeared originally in Haaretz. Reposted with permission.