The Debate Over Chromosome-Centric Media 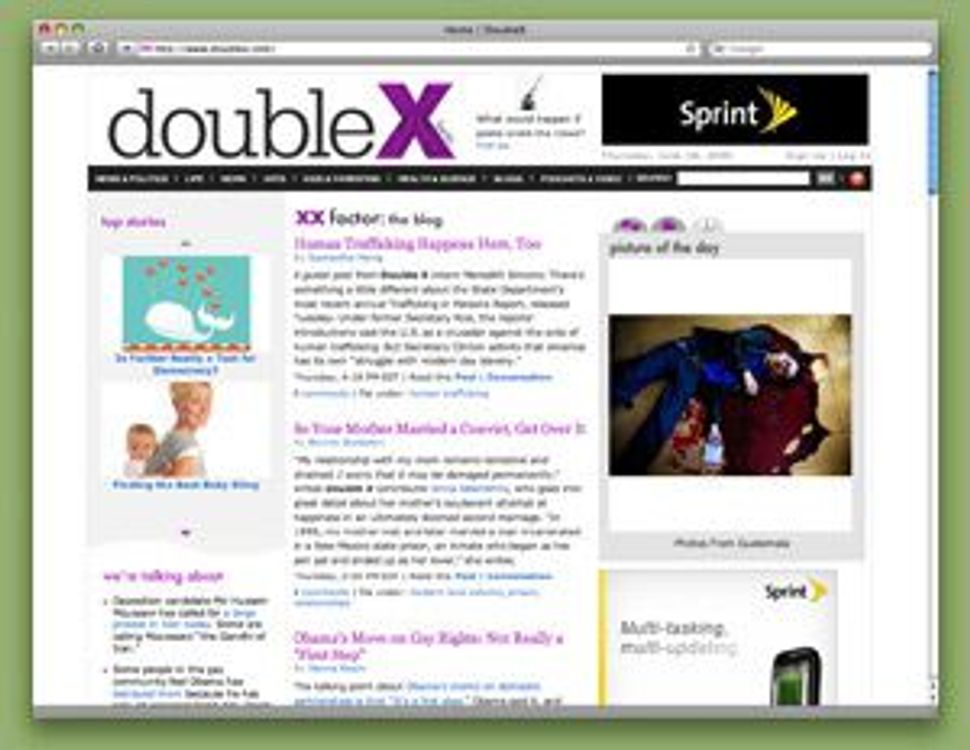 Are women’s voices being ghettoized in the name of niche media? Ann Friedman, deputy editor of The American Prospect recently tackled this very query in light of Slate’s spin-off, Double X, and its debut. It should be mentioned that a founding editor, Hannah Rosin, has been giving smart answers to readers’ questions on the Bintel Brief — and the Forward has made its own foray into niche media with this, The Sisterhood blog.

Friedman calls out publishers of sites like Slate, Gawker, and Salon (each masterminding separate gal-sites, Double X, Jezebel, and Broadsheet) for “signaling that they don’t see a need to have their main site serve [women] as core readers,” while they still dream of ad dollars brought in by this group.

Perhaps these publishers are simply trailing the numbers: In 2009 women’s presence online topped men’s by seven million. Women are projected to drive more than half of total Internet traffic in the next four years. The gut reaction of most entrepreneurs would not be to overhaul a well-performing brand — a tried-and-true place for wonks like Slate or a snarky gossip site like Gawker — but to expand and shape new content elsewhere under its warm gaze. Enter women’s spinoff sites, which are multiplying fruitfully. The best way to become integral in a male-dominated conversation seems to be to bombard it, from the outside and from within.

Friedman wonders why household names, unquestionably aware of the rising demand for women’s content, don’t just publish more of it on their already existing sites. She sets Feministing, the blog where she also dabbles, apart from this conversation because she believes it is steeped in a distinct worldview rather than a “set of chromosomes.”

But what’s wrong with chromosomes? The proliferation of womens media outlets on the Web corresponds naturally to the explosion of more media outlets in general. X-chromosome-based magazines, Web sites, newspapers, and media can influence a broader social conversation. We just have to keep talking to keep up.

In this Sisterhood space, we’re eking out a venue for fresh conversation for/by/about/between women within the Forward’s Jewish, social justice-oriented 112-year-old newspaper format. We produce venerable weekly papers in English and Yiddish — and an award-winning Web site; we’re immensely proud of these publications. But we also like the idea of giving women another platform. Stay tuned.

The Debate Over Chromosome-Centric Media