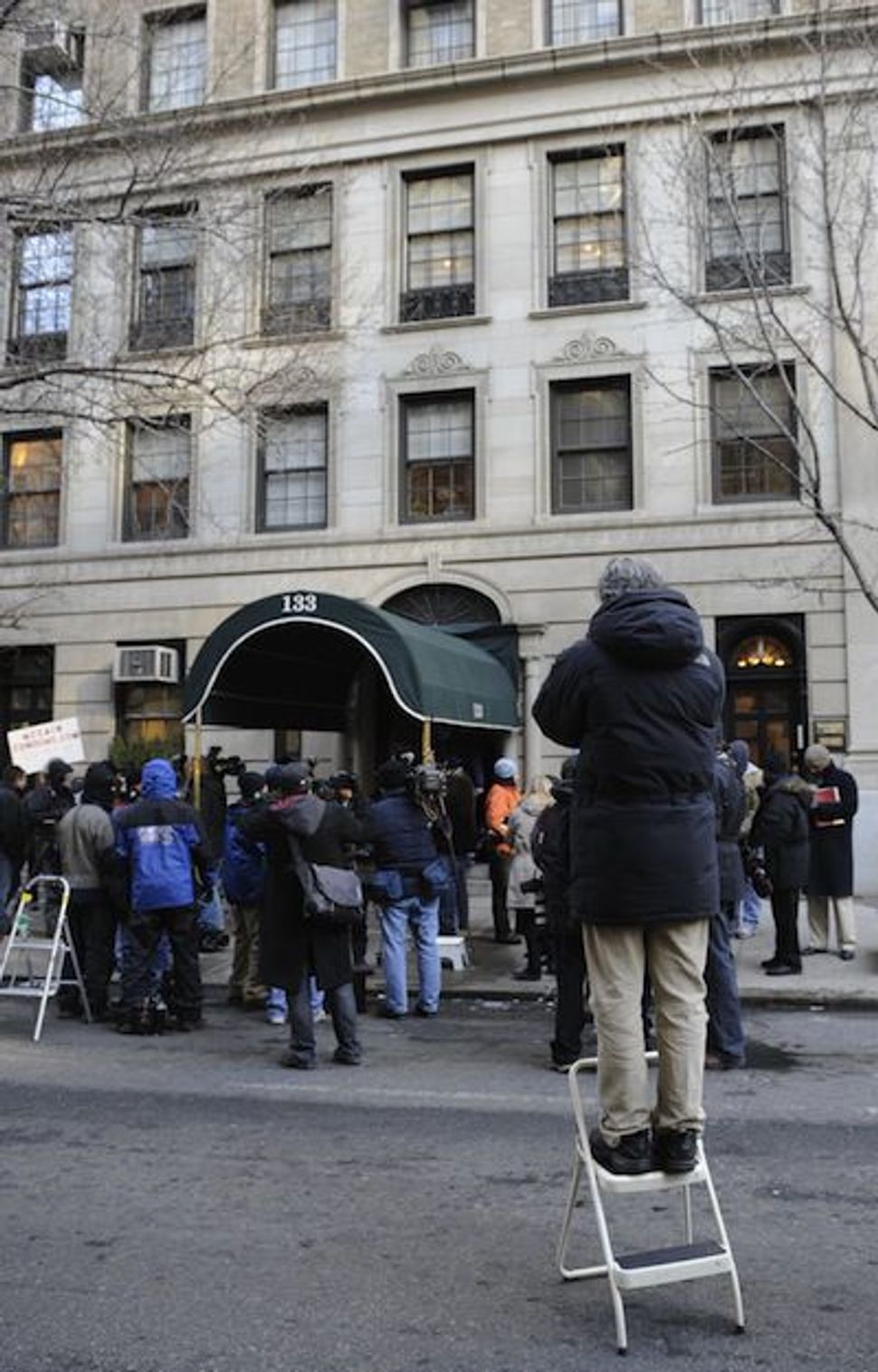 Photographers staked out the Upper East Side building where the Madoffs lived. Ruth Madoff moved out last week. Image by Getty Images

Ruth Madoff’s recent turn of fortunes fascinates me; it also makes me wonder if she deserves to lose nearly everything she has.

With her husband Bernie, she enjoyed a privileged life, with estates in Montauk, Palm Beach, Fla., and a reportedly “modest” 3 bedroom place on the French Riviera, in addition to their penthouse on East 64th Street in Manhattan, which is filled with Persian carpets, Georgian antiques and $65 thousand of silverware.

Ruth — who, like the couple’s two sons, has not been charged with any crime — agreed to give up $80 million in assets she owned with her husband in exchange for being allowed to keep $2.5 million in cash.

Last week she moved out of their Manhattan apartment with only the clothes on her back, as federal authorities seized it in advance of selling it to provide some restitution to Madoff’s victims.

It is not known where she is staying. How many choices does she have? With one of their sons, who both have homes in Manhattan and Greenwich, Conn.? Andrew Madoff had millions of his own invested with his father though his older brother Mark had pulled his money out of the Madoff managed fund to pay for his divorce in 2000. Another likely option would be with her sister, Joan Alpern Roman, who has lately come to her defense.

Before losing her home, Ruth Madoff had already become a virtual prisoner in it, stalked by photographers and shunned by friends and associates, even by her hairdresser and restaurant owners. She said in a statement, issued last week shortly after her husband was sentenced to 150 years in prison, “Many of my husband’s investors were my close friends and family.”

From the moment I learned from my husband that he had committed an enormous fraud, I have had two thoughts – first, that so many people who trusted him would be ruined financially and emotionally, and second, that my life with the man I have known for over 50 years was over … Lives have been upended and futures have been taken away. All those touched by this fraud feel betrayed; disbelieving the nightmare they woke to. I am embarrassed and ashamed. Like everyone else, I feel betrayed and confused. The man who committed this horrible fraud is not the man whom I have known for all these years.”

I find her claim that she does not know her husband — her high school sweetheart — intriguing.

Is it, as one friend claimed at a lively Shabbat dinner table discussion last week, simply a legal maneuver to distance herself from being further implicated in Bernie’s criminal conduct?

But I wonder if we ever truly know even the people with whom we are most intimate. On this question the two married couples at the table were silent. Only the never-married man at the table thought she must have known what was going on. The rest of us, perhaps, knew better.

After all, even among couples in my generation (late-30s to 50s), many times one partner handles the finances and the other says that she (usually it’s the wife) leaves it in her husband’s hands.

All the more so for couples of the Madoffs’ generation. Ruth is 67, Bernie 71. It was typical, when they were married 50 years ago, for women to be uninvolved in their family financial life and certainly in their husbands’ business affairs, even if they were close in other respects.

I feel sure that she enjoyed all of the material fruits of her husband’s fraud. But I think she can only be blamed for greed and willful ignorance. And, to a certain extent, can’t we all?

Ruth Madoff has fallen from a very high place. Perhaps she should have known what was going on. But I don’t think she did. And I feel sorry for her.