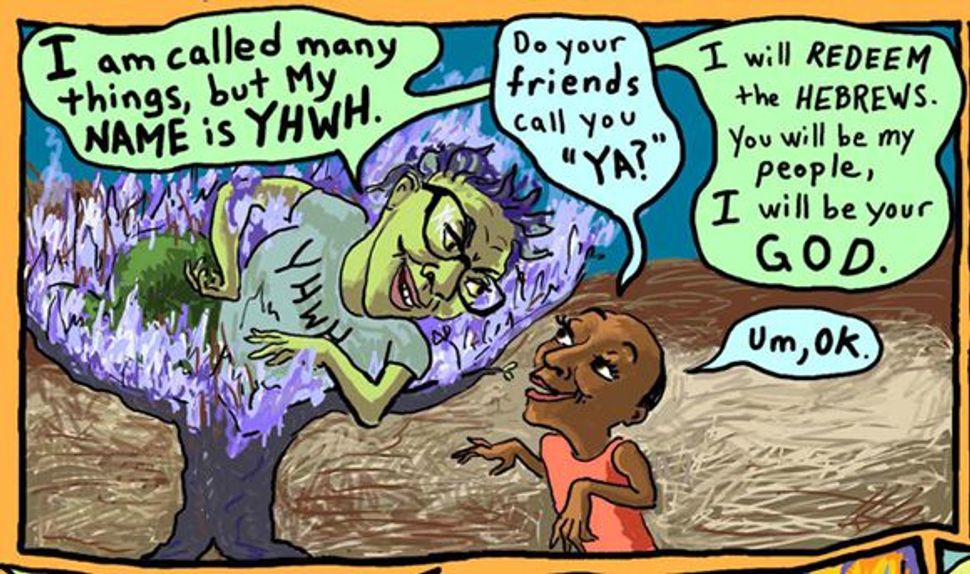 One of the more creative takes I’ve seen on the weekly Torah portion is G-dcast, an animated Webcast that invites a different writer each week to offer their own 4-minute narration of that week’s parsha. It’s a brilliant idea, and often brilliantly executed, offering a unique take on the dvar Torah, and, in some cases, an interesting window into the mind of the week’s author.

But while G-dcast does very interesting things with its animation, as far as I’ve seen, depicting God is not one of them. And understandably so. For the generally reverent G-dcast, this avoidance may have something to do with that whole “You shall not make for yourself a graven image, or any likeness of anything that is in heaven above” thing.

But another Web-based, and more irreverent, cartoon version of the Torah doesn’t shy away from depicting God in bold, anthropomorphic form — and as a woman, no less! (See drawing above).

Like G-dcast, “The Comic Torah” — created by comedian Aaron Freeman and artist Sharon Rosenzweig — depicts each of the weekly Torah portions in drawn form, though with still rather than animated drawings, “The Comic Torah” reads more like a comic book than a Saturday morning cartoon.

And turning their Web-based comic into book form is precisely what Freeman and Rosenzweig are looking to do, with the help of people like you. But more about that later.

As drawn by Sharon Rosenzweig, the character of God, known as “YHWH”, looks an awful lot like, well, Sharon Rosenzweig. Moses, by the way, looks much like her partner in “The Comic Torah” and in life, Aaron Freeman. And, as with the drawn characters’ real-life counterparts, the God-Moses relationship tends to the romantic. Rosenzweig explained, via email, how this conception of God came about:

At first, we avoided depicting the deity, or used old white men, but in our first go at the Akeda, I read god as a bully, which reminded me of my big brother, Larry, so I used him as a model. Later, when God appeared in the burning bush, a flirtation developed IN THE DRAWING, which was completely unexpected. I thought of it as my brother Larry as a girl, but that seemed like a stretch, and since Aaron was already playing Moses, it seemed logical that I play YHWH. After that, we read each parsha looking for the relationship developments.

If this reading of the Bible sounds a tad personal, well, it’s to be expected. Rosenzweig said “The Comic Torah” came about when she and Freeman read “that all Jews are commanded to write their own Torah, and wanted to see what would happen if a comedian and an artist, like us, attempted it.”

As for the untraditional nature of their reading, Rosenzweig takes the blame, acknowledging that Freeman’s initial work “was very reverent, but I was a bad influence.”

And they’re not worried about turning people off: “Judaism is more in danger of dying of boredom than of heresy,” Rosenzweig insists.

In fact, the two see what might be perceived as irreverence as precisely one of the work’s strengths. “We also feel that if people read it and disagree with our take, maybe they’ll feel motivated to have a go at it themselves,” she explained via email, adding, “We want to bring the book back to all the disaffected Jews, like me, who have trouble fitting in to the received Jewish world.”

So, in an effort to reach out to those disaffected Jews, Freeman and Rosenzweig are trying to get their comic printed, and have been given an opportunity to get published by Ben Yehuda Press, if they can raise $12,000. Click here for their engaging pitch video, and to find out how you can donate.

The “Comic Torah” team is offering incentives for those who contribute more significant sums, including a signed copy of the published book and a beautiful challah made by none other than the real-life inspiration for YHWH herself. Rosenzweig assures us she’s for real on that offer: “Locally [in the Chicago area], no problem. I’ll also ship frozen loaves express mail, and since they’re made with honey, they stay fresh a long time.”

Sounds yummy. Food for the God?