Woe Unto the Single, Jewish Actress in New York 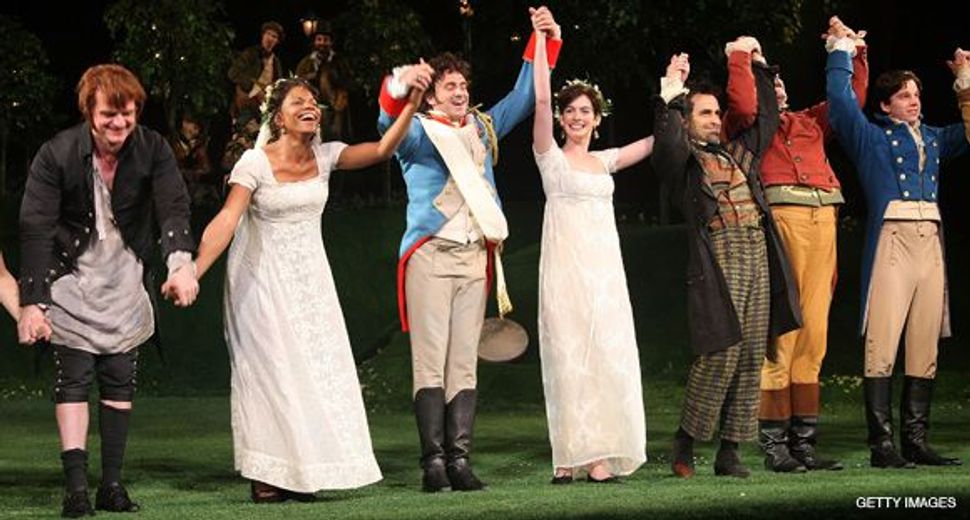 While working on a story about the theater, I came across an interesting, though as yet anecdotally-based tidbit: There are more female than male actors in New York, and the women are more talented to boot.

I learned about this phenomenon from the members of The Dark Lady Players, a Shakespearean theater company devoted to exploring, through performance, the theory that the works we know as Shakespeare’s were actually written by a Marrano Jewish woman named Amelia Bassano Lanier. I touched on this topic before, when I interviewed the founder of the Bassano theory, John Hudson, but this time, for The Jewish Channel’s “Week in Review”, I also spoke, on camera, with the actors in Hudson’s company, who are currently staging “Shakespeare’s Anti-Christian Satires: The Virgin Mary Parodies,” and who are all women.

Was it an artistic choice to make the Dark Lady Players all female, I asked? Turns out, not exactly. The company has had men perform in some of their productions, but they have predominantly female actors because when they hold auditions, significantly more women than men show up, and, according to Hudson, the men who do show up tend not to be as talented as the women.

When the cameras turned off, these classically-trained women actors were more than eager to dish about this phenomenon, which, they said, holds true even for auditions for parts that have nothing to do with demonstrating that Shakespeare’s works were written by a woman. There are generally more women than men at auditions, men always have an easier time getting off the open call wait list, and casting directors go gaga over men’s performances more readily than over female actors’ performances. (And a different but related, if not surprising, phenomenon: male Hollywood actors make a lot more money than their female counterparts.) When it comes to The Dark Lady players specifically, director Jenny Greeman told me, the women are also more interested in sticking around for future productions and collaborations.

Here, too, the evidence as I know it is anecdotally-based, but the accepted wisdom on the “singles crisis” scene is that there are more good single women than good single men. The matchmaker in this video and the L.A. Jewish Journal’s Rob Eshman agree, so it must be true. (It is also true in the general New York dating pool, according to this post.) This over-abundance of wonderful women means that dating is a man’s game, with males (at least in theory) having their pick of eligible women, and females (if they want to get married), often having to settle for a guy that might be just a little less eligible than they would have liked.

When it comes to dating, men can get better parts more easily, so to speak. (Again, evidence is anecdotal, but widespread.)

While surely there are specific, unique factors causing the overabundance of “good women” in both acting and dating, in both cases, the simple fact that there are more women than men in the world — and in New York specifically (see census data here) — must play a role. In a dog-eat-dog world, guided by survival of the fittest and supply and demand, this numerical inequality leads to more competition between women — for parts or for husbands as the case may be — which drives women to work even harder to stand out from the pack. Men, with less of a need to compete, just don’t have to be as good to get what they want. Sigh.

And, when you think about it, first dates and auditions have a lot in common. In both, one has but a few minutes to make a good impression, since both men and casting directors generally have the notion that there are plenty of other fish in the sea (“Next!”). The things one does to ensure that first impression is positive, to attract a mate or to win an acting role, are also similar: look beautiful, speak well, exude charm.

Actors, of course, have the advantage of a script, while daters must ad-lib. Though anyone who has been on a lot of first dates (and granted, it’s been a while for me) knows they tend to follow a rough outline — one can rehearse answers to stock questions like ‘what kind of music do you like,’ or ‘what do you do for a living’. It’s when the date starts getting good that the script goes out the window, and the extemporaneous business of love begins.

Woe Unto the Single, Jewish Actress in New York