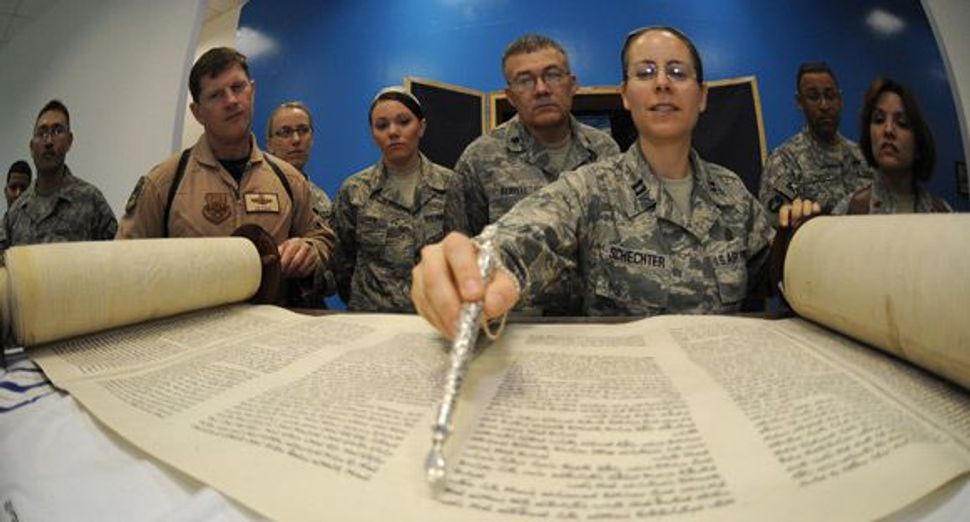 The Sisterhood spoke with Air Force Captain Sarah Schechter, 41, who is a chaplain and a Reform rabbi, as well as the mother of 3-year-old-daughter Yael Emunah. She works at the Lackland Air Force Base in San Antonio, Texas, mostly with new recruits who are in basic training. In the past two years she was deployed to an undisclosed location in the Persian Gulf and recently returned home from a four month deployment in Balad, Iraq. Her husband is a stay at home dad. We spoke with Capt. Schechter, above reading Torah, about what it’s like to be a mother working in the military. You can read a related story, about Jews in the military, here.

Tell me about your start in the military and your career path.

I joined the military as a result of Sept 11th. As an adult I never seriously contemplated the military and it was not a track particularly developed in rabbinical school, but when our country was attacked, immediately, I realized our complete dependence on the good will of thousands of people who volunteered to make national defense their business. I wanted to help in any way possible and for me, that meant becoming a chaplain. On Sept 12th, I called an Air Force recruiter and, echoing Abraham’s words, I said, “hineni,” “here I am.”

How long had you been serving when you had your daughter?

My daughter was born a few years into my military service. I joined as a chaplain candidate while still in rabbinical school and have been in active duty service the past five and a half years. I have deployed twice in her three plus years and all in all have missed quite a bit of time in her life.

What are challenges of being a working mother unique to the military, if there are any?

Here’s one example: I was home on maternity leave when I received a call that a year from then I was deploying to the Middle East. I always knew the day would arrive, but that morning, with the phone in one hand and a nursing baby in the other, I did all I could to maintain my composure and say good naturedly, “Thank you Sir, that is great. ” As a mom and a military professional, and this applies to most working mothers outside the home, every day I confront opportunities that will either boost my career, but detract from my family life — or boost my family life, but detract from my profession. In the military deployment is not an “if,” but a “when” and not something to be avoided, but embraced. It is a unique experience in its own right and a powerful one. But for that first year as a mother I had to get it into my head that I was leaving this baby I adored. Four months felt like 40 years and once I realized that even a week was unacceptable, I knew I just had to deal with it.

What about the danger of being in war? How do you think about these things, especially as a mother?

You can’t. You don’t. You just block it out.

How much maternity leave does the military give you, and is it paid or unpaid?

As paid maternity leave I got six weeks. About four years ago the Air Force came out with a rule that if a mother is nursing, that she must be given time to nurse throughout the day, she is to be allowed a private room where she can pump and do what she needs to do. That’s an amazing statement of recognizing that this is what women do, if we want to have women on our team, we need to take care of them and help them take care of their families. I have my own office as a chaplain. and I’d go into my office and put a sign on my door saying “pumping iron.” I work in a 95% male dominated environment, so you have to be disarming.

Do they have special maternity uniforms?

Yes they do, it’s amazing. I was wearing my battle dress uniform with combat boots. It was only at the end of my pregnancy that I learned you don’t have to wear combat boots when you’re pregnant, you can wear sneakers. I was bummed to have missed out.

Does the military treat women who are mothers differently from those who are not?

No. And that is a double edged sword. I have found equal opportunity to excel, equal opportunity to shine, whether you’re a mother or not, if they need you to deploy you’d better step up with a smile. I’ve found the military to be profoundly compassionate when they can be. But they also expect people to be the same. Baby or no baby, deployment is not an “if” but a “when.” If you can’t go, somebody else’s mom or dad or daughter or son has to go in your place. There is the mission.

Are there any challenges to being a Jewish chaplain in the service and if so, what are they?

I grew up in New York City and never felt like a minority. In the military I am a minority. It’s a predominantly Protestant environment. Easily a third of people who attend my services are not Jewish. They want to learn about Judaism. In terms of outreach and building cultural connections, it’s been phenomenal.

Do you see yourself staying in this career indefinitely?

I do. I feel like I’ve been given a gift to be in the military at this time now. Jews need to have a rabbi there. We can’t be Jewish in isolation. It’s very important for the morale of Jews. There are only six or seven active duty chaplains who are rabbis in the Air Force.

Yael Emunah is 3 1/2. I would love to have more children, but I don’t think that’s going to happen. It has to do with my job. I work very long hours. I’m very passionate about my job. With the deployment aspect, I just can’t see fracturing my time from Yael any more than I have.