Jeopardy Does Jews’ Clues in the Holy Land 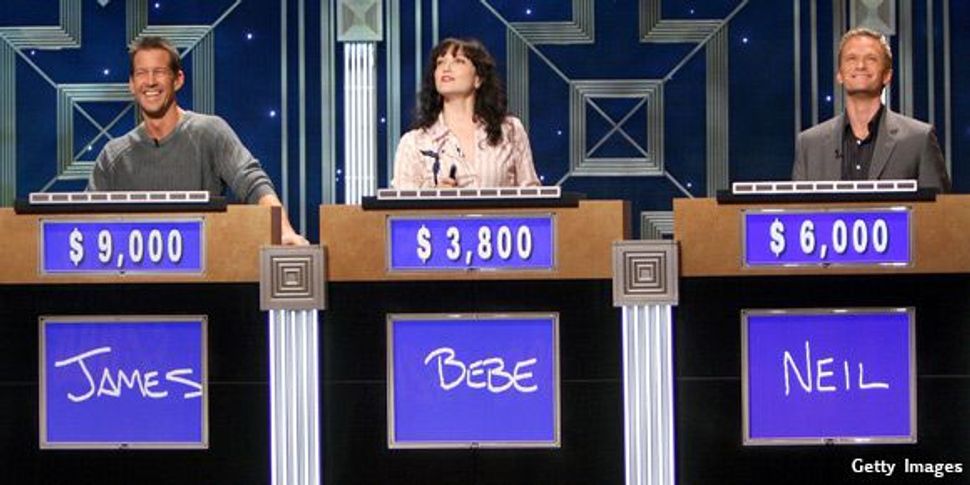 That’s what contestants on “Jeopardy!” were saying November 23, when the famous quiz show included a Double Jeopardy category titled “A Journey Through Israel.”

Host Alex Trebek and his team, the Clue Crew, traveled to the Holy Land in early September, the show’s first time there, to tape the questions, which also will be used throughout the year.

They spent nearly three weeks exploring and filming, starting in Tiberias and winding their way around the country. The questions gave a taste of four of the locations that Trebek and two of the three Clue Crew members visited, said Jimmy McGuire, a Clue Crew member for the past nine seasons.

Videotaped questions touched on both Israeli and Jewish topics, such as Oskar Schindler, the Sea of Galilee, Masada and the Dead Sea, in which Trebek was featured floating.

“We did a whole slew of clues involving each area and its history,” McGuire explained. Producers decided to do the segment in Israel because out of the 30 countries the show has visited, Israel was missing from the list.

“We do our best to try to travel the world, and Israel was one place we hadn’t visited,” McGuire said, adding that this was his first trip to the country.

McGuire wasn’t at all opposed to the idea: “My father’s Irish, my mom is Jewish. I’m a bar mitzvah, so it was kind of an important trip for me.” Although McGuire is the only Jew among the three Clue Crew members, he notes that “a couple guys on the crew are Jews, so I wasn’t representing by myself.”

His favorite part was “the Western Wall. I just couldn’t get enough. A couple of the guys on the crew [and me] — we went three or four times. It’s its own celebrity.”

Publicist Jeff Ritter said that the idea of using Israel as a topic is not new to the show. “After 25 years and 6,000 shows, I’m sure Israel has been a clue at some point.”

Jeopardy Does Jews’ Clues in the Holy Land