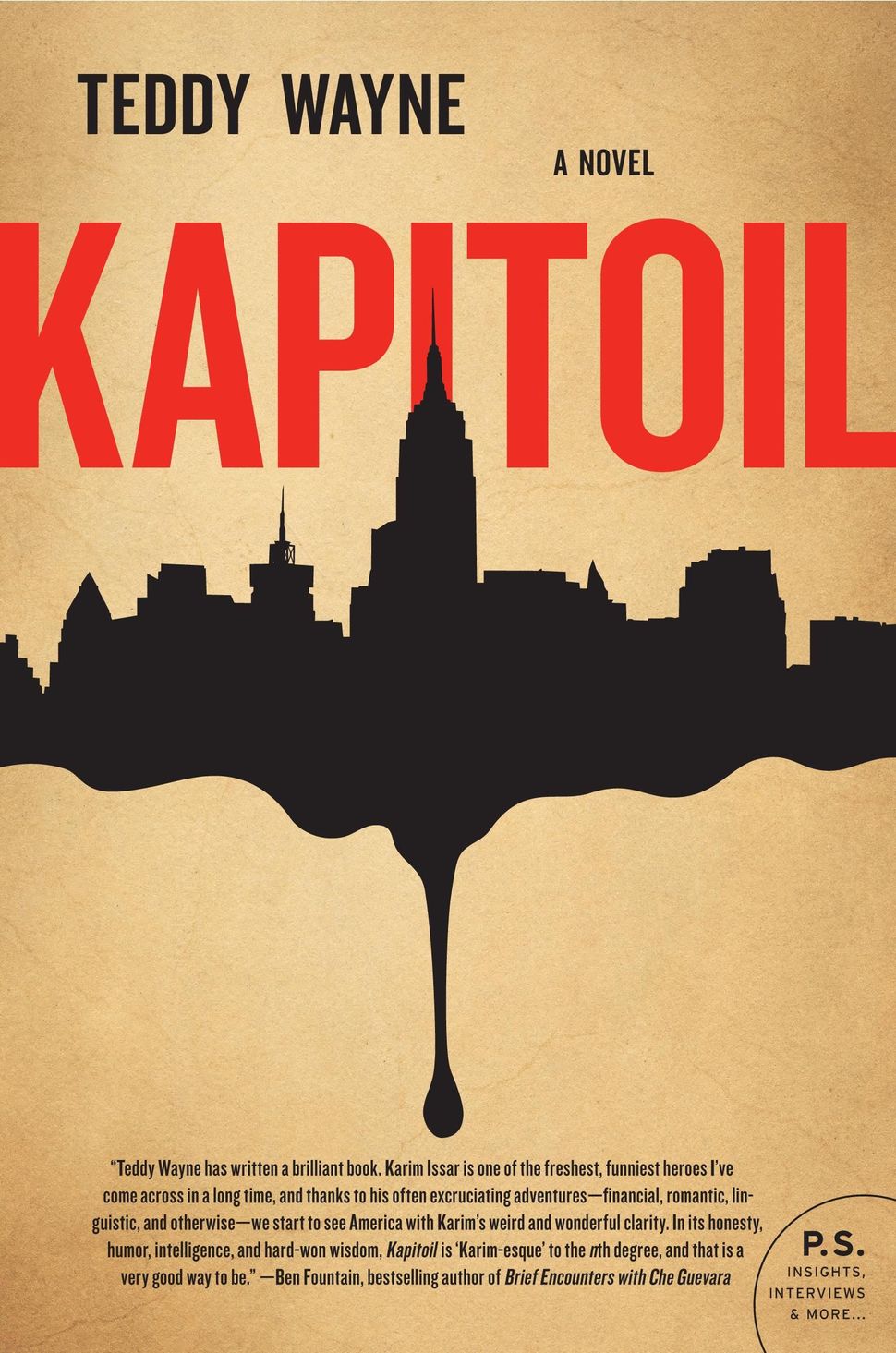 In his new debut novel “Kapitoil” (Harper Perennial), Teddy Wayne tells the story of Karim Issar, a young man who relocates to New York City from Qatar to help a big financial firm prepare for the Y2K bug. Though shortly after beginning his new job, Karim ends up creating a computer program that helps his company make gains through oil futures by following political instability in the Middle East. The program is successful and, at the same time, morally questionable. But life in New York isn’t all business for Karim. He also has a chance to get to know the 1999 twenty-something scene in New York, and develops a romance with a colleague named Rebecca Goldman.

In an interview with The Sisterhood, Wayne, who is Jewish, discusses his book and the Rebecca character, who, unlike many Jewish female characters in books written by Jewish men, is a rather likeable character.

Elissa Strauss: Jewish women have not always received the most sympathetic portrayal in fiction by Jewish men. But Rebecca Goldman is different. Instead of materialistic and overbearing — the hateful characteristics usually pinned to the Jewess — she is funny and knowing. Did you think about this when writing the book?

Teddy Wayne: I tried not to think of her too much as either a Jewish character or a female character — just as a character who happened to be a Jewish woman. I followed the F. Scott Fitzgerald dictum: “Begin with an individual, and before you know it you find that you have created a type; begin with a type, and you find that you have created — nothing.” It helped that I probably have more in common with her than with any of the other characters.

In the book Rebecca develops a relationship with Karim, who is Muslim. Instead of turning into a Romeo and Juliet, us-vs.-them conflict, they are able to just enjoy one another without dwelling on ethnic issues. Do you think Rebecca is exceptional or unusual in this regard?

Rebecca is half-Jewish and secular, so that makes it easier. If she were a practicing Jew, it would have necessarily altered how I wrote about their relationship, and the Romeo and Juliet/West Side Story/Jungle Fever trope would have been more prominent. So while she and Karim are both aware of their cultural differences, that’s not the focus; it’s been done enough, and I was more interested in looking at them as two individuals who come together for personal, not political, reasons.

Did you know Rebecca would be Jewish when you started the novel, or did this happen as you began to write? Why did you decide to make Rebecca Jewish, and how does she relate to your Jewish experience?

I did want her to be Jewish from the start, albeit, again, nonreligious. Both my parents are Jewish New Yorkers, though I was raised in a secular humanist household — we gave presents at Christmas, I wasn’t bar mitzvahed, and my main exposure to Jewish culture was through friends. I’ve come to understand that this is fairly anomalous for people with two Jewish parents and more common for children with just one, so I made her half-Jewish, on her father’s side.

That said, Rebecca, like Karim, is an outsider. As a socially awkward computer programmer from Qatar, Karim is more overtly so, whereas Rebecca seemingly blends in, but doesn’t feel fully comfortable in her peer group — hipsterish 20-something Brooklynites, who also tend not to be Jewish. So she’s a bit of a double outsider — a Jew amongst non-Jews who doesn’t embrace her Jewish identity, either. Not having a close relationship to Judaism myself, I’ve certainly felt both these strains of alienation before.

There is one other Jewish character in your book — Dan, who is a colleague of Karim on Wall Street. He is mostly a typical frat boy, but there are also hints of his homosexuality. Why did you chose to have him also be Jewish and in what way does his Jewishness, as it does with Rebecca to a degree, serve as a stand-in for his vulnerability?

Dan — tall and gawky, prematurely balding, insecure around women — works alongside and is good friends with an undersized, handsome, charismatic WASP named Jefferson. I liked the idea of their mirroring, in a very oblique way, Rebecca and Karim’s mismatched partnership. There are plenty of Jewish — and non-Jewish — men like Dan who work in New York finance: economics or business majors in college, not terribly interested in much beyond finance and sports, trained from a young age to do what they’re doing, who don’t really know what to do with all their money, except maintain a luxury lifestyle they think they’re supposed to have. My editor described him as something of a tragic figure; he has a deep streak of self-loathing that comes out a few times — not connected to his Jewishness — and he, too, is an outsider, ill at ease in the shark tank of New York finance, though he’s unlikely to admit it. Jefferson slurs him a couple of times, the first instance with more irony than the second, calling him a “dirty Jew” and a “cheap-ass Jew,” which Karim notes. In the novel’s setting of New York City in 1999, no one flinches at this display of casual anti-Semitism — except for the Muslim character.