From Feminists, a Cautious Optimism on Kagan Nomination 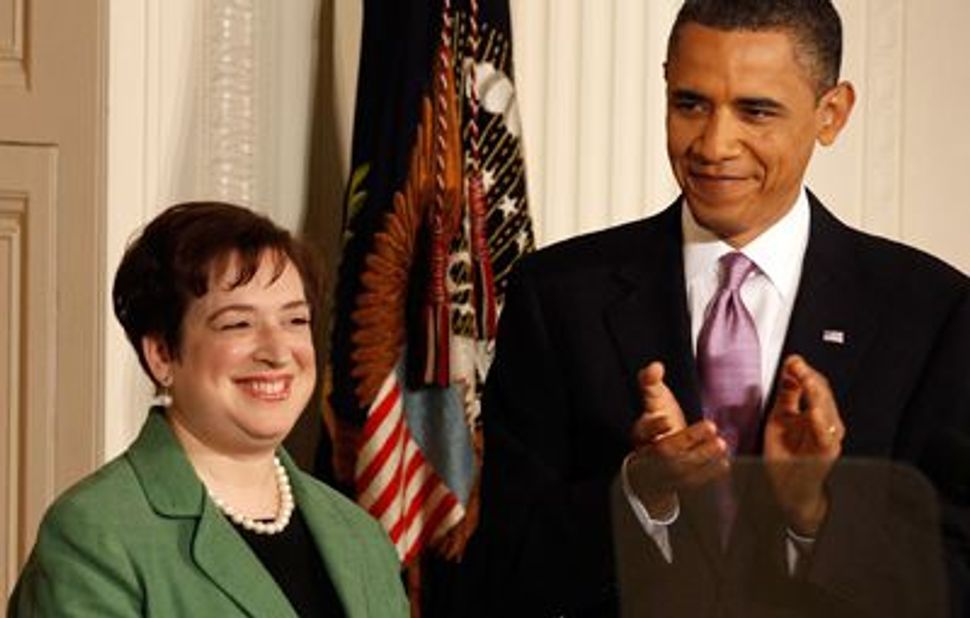 While there’s a lot of immediate excitement in the progressive Jewish and feminist communities about Elena Kagan’s nomination — Jewish! Female! Liberal! Possibly gay! — her lack of experience as a judge leaves many people guessing as to what legal and political principles Kagan stands for. Meanwhile, we cultural critics ponder what her nomination symbolizes in terms of women’s progress.

Personally, I can’t help but be a little pleased that a strong Upper West Side-reared Jewish woman (like me!) has made it thus far. It’s also plain exciting that the nomination of a woman is now becoming routine. Meanwhile the optics of Kagan sitting on the bench along with two other woman, another Jewish one and a (wise) Latina one, are hard to beat. As Jessica Grose at Slate wrote, the nominee’s blatant, longtime ambition should serve as a clarion call for women that it’s okay to stake out your territory and demand success. Still, Sisterhood contributor Deborah Kolben writes that such ambition, combined with the fact that both Kagan and Sotomayor have not had children, still sends women the message that you can’t be successful and be a mother at the same time.

Beyond the implications for women, there are a lot of questions swirling around about just what kind of justice Kagan would be.

Specifically at play are her views on executive power and on abortion. On the executive power front, Glenn Greenwald has consistently and cuttingly made the case that Kagan is far too deferential to executive authority and would move the court to the right, since retiring justice John Paul Stevens has been such a stalwart defender of due process and the rights of detainees in the terrorism era to a fair trial. Think Progress counters Greenwald’s arguments here.

On abortion, Kagan is generally believed to be pro-choice, earning the hearty endorsement of several prominent women’s rights groups. But many mainstream pro-choice groups groups like NOW and NARAL have reserved judgment until her confirmation process. Sarah Posner has a wrap-up at Religion Dispatches.

Perhaps Jill Filipovic at Feministe sums the general feeling up best when she says that Kagan is a perfectly “fine” nominee but “a little bit gutless.” In other words, while Kagan may be an adequate substitute for Stevens, she doesn’t appear to be the bold, thoughtftul, liberal shaker-upper for whom feminists and progressives had hoped.

From Feminists, a Cautious Optimism on Kagan Nomination