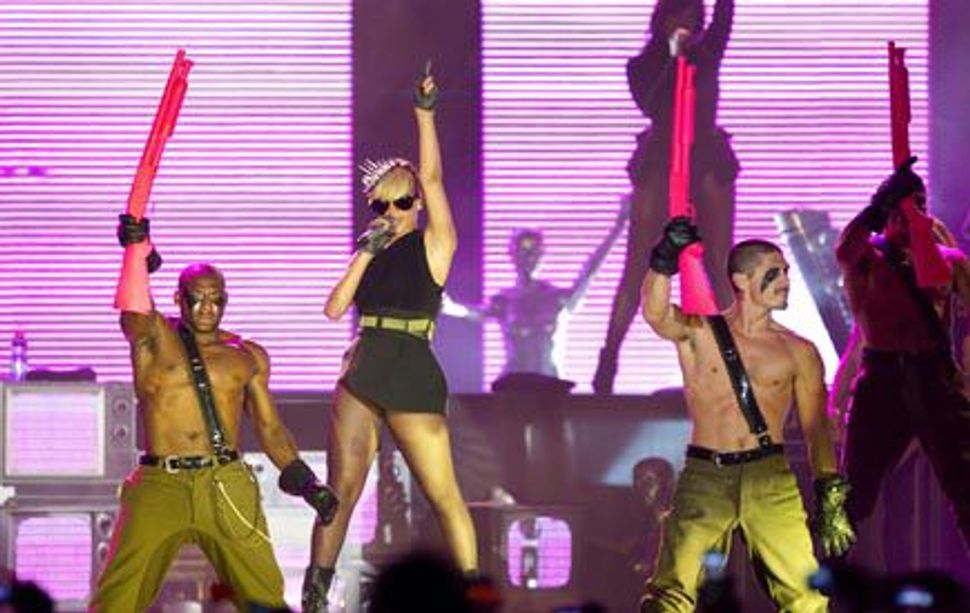 Rihanna performs in Tel Aviv on May 30. (click to enlarge) Image by Getty Images

Some great music artists have been performing in Israel. Madonna’s 2009 concert and Elton John’s concert in two weeks are definite highlights, although I suppose this admission reveals that I am in fact just a teeny-bopper at heart.

Given the political context, I feel like I should probably be grateful for any artist willing to stand up firm against those who advocate for a boycott boldly take the stage in Ramat Gan. But, as much as I’m loathe to admit this, I’m less excited about some artists than about others.

Rihanna, for example, who is in Israel at the moment, makes me bristle. She is a walking advertisement for how to become a battered woman. It’s not just that she reportedly went back to the man who beat her so badly that he reportedly gave her a black eye and broken teeth. It’s not just that she reportedly “forgave him” before he began serving his sentence for assault. After all, he wrote a song for her, so how could she not forgive, right? At least that’s what throngs of talkbackers said. It’s not just her real life but also her music that truly turns me off. Rihanna’s hit “Russian Roulette” is one of the most chilling, anti-women songs I have ever heard.

I cannot believe that it continues to be played on the radio. In a slow, dramatic, agonizingly kvetchy melody, the song describes a woman standing before a man who is holding a gun to her.

You can see my heart beating
You can see it through my chest
I’m terrified, but I’m not leaving
I know that I must pass this test
So just pull the trigger…

As my life flashes before my eyes
I’m wondering if I will ever see another sunrise
…I’m terrified, but I’m not leaving
I know that I must pass this test
So just pull the trigger…

At the end of the song, there is the sound of a gunshot.

What is the message here? That a woman’s “test” is in her ability to stand still while a man holds a gun to her? That the goal in life is to take deep breaths and meditate while a man takes her life? This is so twisted, and absolutely the worst message girls and women can hear about life, relationships, strength and self.

It makes me pine for the days of Gloria Gaynor and her tough, fast-paced, take-no-crap, “I will survive.” She, too, had a scary boyfriend. “At first I was afraid, I was petrified.” But then she stands up for herself.

I should have changed that stupid lock
I should have made you leave your key
If I’d’ve known for just one second you’d back to bother me
Go on now, go, walk out the door
Just turn around now
‘Cause you’re not welcome anymore
Weren’t you the one who tried to hurt me with goodbye
Did you think I’d crumble?
Did you think I’d lay down and die?
Oh no, not I. I will survive.

Now there’s a message for women. If he hurts you, kick him out — and don’t forget to change the locks!

It’s interesting because there are some really great feminist artists out there: Mary J. Blige, Indigo Girls, Suzanne Vega, Carly Simon, The Bangles, Ani DiFranco, for example, plus Margalit “Margol” Tzanani, Gali Atari, Yehudit Ravitz, in Israel, to name a few. Yet, alongside our feminist progress there exists also a regressive misogynistic backlash. Troubling lyrics like those in “Russian Roulette” are just one example. Images of women in music videos — portrayed as “walking bling” — are another expression of the misogyny. And research continues to point out that music lyrics and images have a direct influence on teenage behavior and ideas about gender and sexuality.

So pardon me if I don’t celebrate Rihanna’s music, even if I’m glad for the extra visitors to Israel. But let me tell you, if Mary J. Blige decides to make her way here, I will be the first in line to buy a concert ticket, because she, like so many great feminist women, truly is “Fine.” Now that would be a celebration for women!