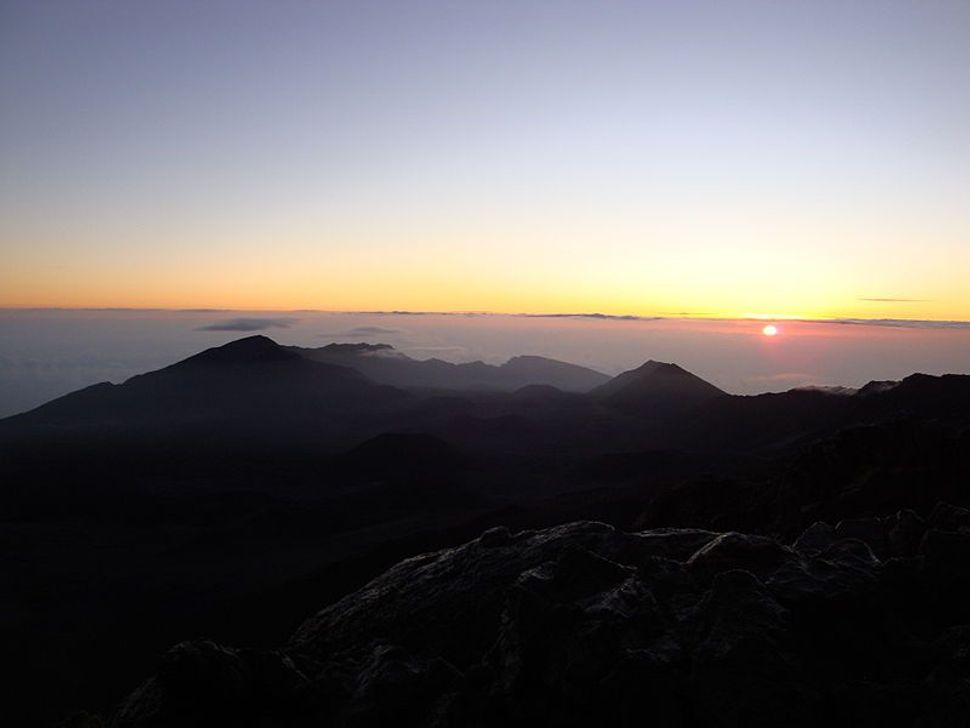 It’s 3:30 a.m. and I’m getting dressed. We have to leave right now in order to arrive by sunrise. I put on warm socks and grab sweatshirts because, even though it’s August in Maui, the mountain peak we’re headed to is freezing. I’m finding it hard to imagine being cold, but I’m covered and we’re off.

We get to the foot of Mount Haleakala at 5 a.m. The stars are still out, but the park ranger tells us we’re late, that the site is already crowded, that next time we should plan to arrive 30-45 minutes earlier. We drive in zig-zags up the side of this mountain, rumored to be the steepest slope in the world. At 9,000 feet high, my breath feels funny, and I can see lights from distant islands. Hawaiians claim that Haleakala is taller than Mount Everest, when you take into account that part of it is under the ocean. When we arrive at our destination, we are standing on top of layers of clouds, resting inside the crater of a dormant volcano. It feels like we are, literally, standing on the top of the world.

My host, David Weisfeld — an energetic, buoyant real estate developer originally from Texas for whom Maui is home and Judaism is heart — is a bit disappointed at the size of the crowd. “I used to bike down that trail over there,” he says, pointing to the side of the mountain near what is now a massive science and astronomy center run by the government. “There were so few of us back then that we would share our danishes.”

David has brought me to this place to help The Jewish Congregation of Maui reinvigorate its community, and to build a Jewish spiritual center of Maui. It’s a thrilling venture for them and for me, and I’m using every opportunity to draw inspiration.

Atop the mountain, everyone is waiting with bated breath for sunrise. The pastel light morphing into a yellowish glow gently breaking through the clouds over the crater lines just before erupting into the bright sun is one of the most breathtaking sights I have ever seen. This cracking open of the sky, like the rupture of an egg as a chick comes to life, is what the creation of the world must have been like. I could not help but be washed away in this power of conception, the fire of sun blending in my consciousness with the fire of an erupting volcano, bringing forth in my soul and spirit a fierce desire to create.

It’s easy to understand how Haleakala became sacred ground in Hawaiian lore. Generations of people would trek up the mountain, whose name means “House of the Sun,” to receive some of this fire energy. Hawaiians believed that the depression at the summit of Haleakala was home to the grandmother of the demigod Maui, and she helped him capture the sun and force it to slow its journey across the sky in order to lengthen the day. There is also a belief that Haleakala is the location of the earth’s “heart chakra” — one of four energy centers on the earth corresponding to the four elements. Interestingly, this same belief system views Mount Sinai, which is almost exactly 180 degrees around the globe from Haleakala, as the home of the earth’s “air chakra,” Many people also believe that the chakras correspond to the “sephirot,” or the energy centers described in the Kabbalah.

Hawaiian culture talks about “aloha” as a kind of inner lifeforce, which is really the equivalent of the “Chi” life force or, perhaps, what Leonard Cohen immortalized as “Hallelujah” when he sang, “Love is not a victory march — It’s a cold and it’s a broken Hallelujah.” I believe that most religions share this basic premise, that life is a quest for this divine energy, for the Godly spark of love and compassion that is buried in each of us. Religion is meant to be about bringing these spiritual forces into the material world. So often we get wrapped up in the wrong aspects of our spiritual lives that we forget this basic premise.

Coming to a place like Mount Haleakala, this place in the universe where Judaism meets Hawaiian culture — exploring this glorious spot on the earth with my Jewish guide, the Jewish texts in my mind, and a Jewish spiritual quest in my soul reminded me that we are all searching for the same thing: the universal source of God in our hearts.