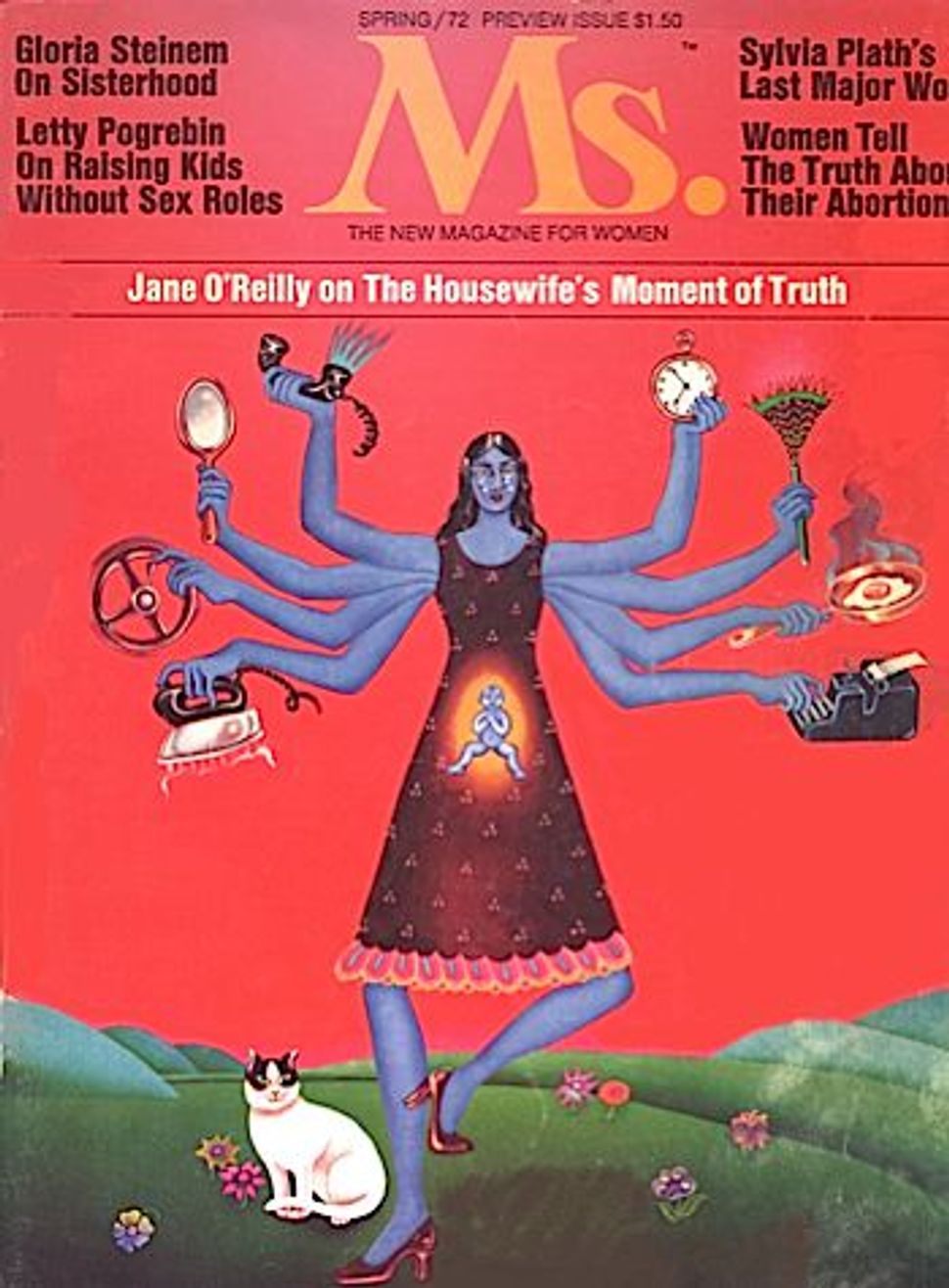 The first issue of Ms., illustration by Miriam Wosk (click to enlarge) Image by Ms. Magazine

“In her art she was a perfectionist and in her life she was a realist,” wrote Sheila Balshine Romalis, of the illustrator and multimedia artist Miraim Wosk, in a letter to Wosk’s son. The letter was one of condolence, following Wosk’s recent death from breast cancer at the age of 63.

Romalis knew Wosk from their years growing up together in Vancouver’s Jewish community in the 1950s and 1960s. The two women went on to be roommates in New York in 1967, while they were both attending design school.

That was the period in which Wosk’s career took off. She began as a fashion illustrator — working for Vogue, Mademoiselle, Esquire, New York magazine, and The New York Times. Wosk is known in feminist circles for having created the cover art for the first issue of Ms. Magazine in late 1971. That colorful illustration featured a pregnant woman with eight arms, symbolizing the many roles that the modern woman juggles. Other subsequent covers she designed for the magazine showed similar multi-limbed, multi-tasking women.

Looking for a change, Wosk moved to Los Angeles in the early 1980s and shifted her creative energies away from illustration and toward collage, print-making and painting. She became active in the L.A. art scene, and in supporting efforts to help disadvantaged youth. During this period, Wosk noticed the work of Frank Gehry, then only starting out in his architecture practice. She commissioned him to design a three-story penthouse for her.

As it was described in an article about Wosk in The Globe and Mail, “Wosk House had a chimney stack decorated with blue tiles, a kitchen under a dome with a stained glass skylight, a dining room in a greenhouse-like structure, and a den in a ziggurat coated with gold auto-body paint. At the far end of the rooftop, her studio was a large aluminum shed. The floors, including the sweeping curved stairway, were covered with a riot of coloured tiles, designed by Wosk to resemble Antonio Gaudi’s famous tiled park in Barcelona.”

Later, Wosk moved to a large home in Santa Monica, where she had a warehouse-size, meticulously organized, light-filled studio in which to produce her large-scale, vibrant works. “I’m a visual glutton,” is how the artist described herself, a collector of just about any kind of material or found object she could possibly incorporate into one of her complex collages. “There’s this overload of sensory material that’s so confusing and distracting, and to find the essential in all that…,” she mused in a short film about her called “Language of the Soul,” by Terry Sanders.

Since starting over in L.A. 30 years ago, Wosk took part in close to 100 solo and group shows in cities across the country and around the world. Her work was shown mainly in commercial galleries, but also in some museums.

“The greatest teacher was doing the work,” she is heard saying in the film about her. Wosk, who battled her illness for five years and is now buried in Hawaii, believed that in her art and in her life, “Everything I do is a stepping stone to the next.” She said that authenticity is about “letting go of the outcome.”