Our Good Fortune, the Flip Side of Separation 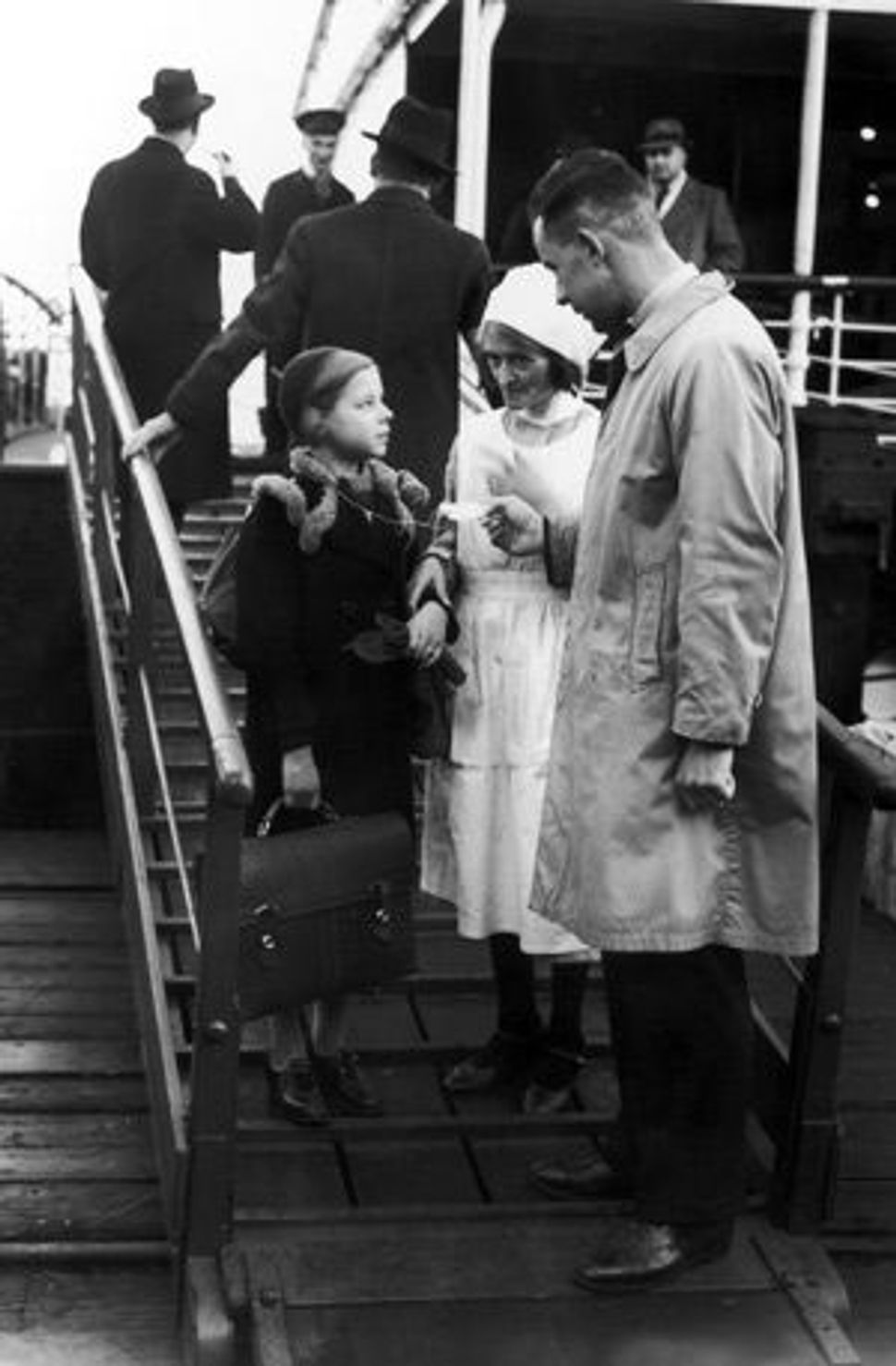 Imparting History: The idea of separation from a child, Wildman writes, is abhorrent ? in a camp, or outside one. Above, a German Jewish girl is met at Harwich, England, by a representative involved in the Kindertransport in 1938. Image by GETTY IMAGES

On a recent glorious Sunday — the type of beautiful fall day where the light is golden; the weather warm, but not overly so; a time for sweaters, but not jackets — I went to a flea market with my daughter, Orli; my partner, Ian, and my friend Stephanie. We spent a few hours picking through tchotchkes, drinking coffee and buying a toy car for Orli from a wood-carver. (“Caaaaar,” she’d said reverentially, gazing at its red painted body; we caved.) 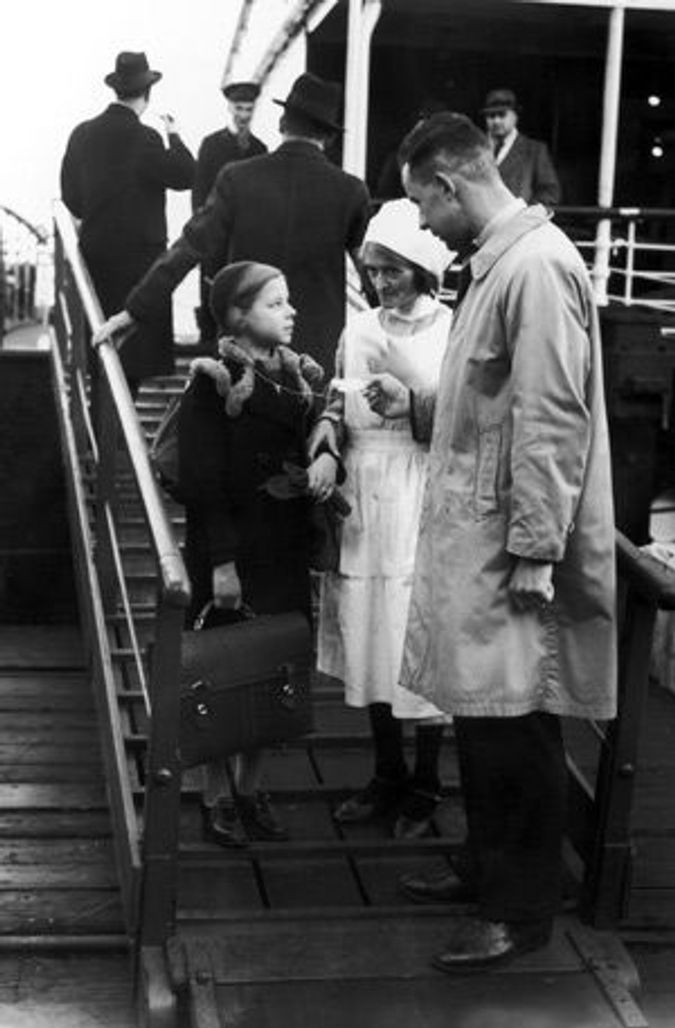 Imparting History: The idea of separation from a child, Wildman writes, is abhorrent ? in a camp, or outside one. Above, a German Jewish girl is met at Harwich, England, by a representative involved in the Kindertransport in 1938. Image by GETTY IMAGES

The three of us traded off Orli responsibility; at 22 months, she’s prone to run without notice. Toward the end of the morning, as we were considering packing up for her afternoon nap, it was my turn with her. She walked between the stroller and me, refusing, typically, to sit, when I was momentarily distracted. It couldn’t have been for more than half a second: I’d seen an abacus on a hawker’s table, the kind with multicolored beads, like I’d had as a child. “Hmmm. An abacus, do you think you’d want an abacus?” I mused aloud, not expecting an answer. And then, out of the corner of my eye, I saw Stephanie dash past me, into the thick crowd of antiques hunters. I realized, a beat too late, why: Orli had taken off.

It was a moment of sheer terror, a feeling that clung to me long after the event; her actual disappearance lasted only seconds. I remembered an advertisement a travel company had sent me recently: temporary tattoos created with parents’ phone numbers and/or e-mail addresses. I mentioned it to Ian. “Jews don’t put numbers on their arms,” he said. “Maybe we could get her a tag,” I suggested, “like Paddington Bear.”

The last weekend of October I went to London for a three-day conference, and upon my return, I experienced a feeling corollary to that flea market day, an intense need to hold Orli. I arrived after her bedtime and was hugely disappointed. It’s an almost primary urge for physical immediacy, rivaled in intensity by only the moments immediately following birth, or by the fear of loss. Watching her in the bath the night after I returned (she’s a big girl now, and likes to sit and play for a long time after washing), I felt an overwhelming swell of affection. I’m sure she found it annoying. It was Halloween, and we’d spent the early evening at a local community kids’ event where I’d tried to help a child who was lost and couldn’t tell me her mother’s name or phone number. She was hysterical. Her mother quickly ran up and, in Spanish, explained that she’d been there all along, just behind a man on a Segway scooter, dressed as a ghost. The kid was inconsolable.

So often, in parenting, we get bogged down in logistics. In a two-parent working household, the pas de deux of caring for Orli is often boiled down to who is taking her to which class at what time, who can relieve the baby sitter, who can make dinner, who can put her to bed. These are the frustrating bits, in other words, which peculiarly, despite how stressful they can be, make it all too easy to forget how fortunate we are.

I’m struck by this, as I often write about the Holocaust in addition to my regular, political journalism. A granddaughter of a Holocaust refugee, I spent my childhood imagining how I might have survived, placing myself in each category of person as I grew, although the likelihood of survival was far lower than that of death. Even so, I still could picture my chances. That is, until I became a mother. For young pregnant women, or women with small children, the chance of survival was dismal. Deported together, mothers of small children shared a nearly zero chance of joint survival. Hiding together was next to impossible. But the idea of being able to let a child go into hiding with a Christian family seems impossibly heroic to me. The idea of separation is abhorrent — in a camp, or outside one.

We grew up with a group of kids whose grandmother had been a Kindertransport child, one of those 10,000 babies-to-teens sent from Vienna, Prague and Berlin, parts of Poland and Holland in acts of unimaginable selflessness on the part of their parents. She never saw her mother again. I remember vividly her telling us the story one night. It was Friday night, and the meal was finished — just sliced fruit on plates, and mostly empty wine glasses. She began to cry. Her mother had had a chance to save herself but didn’t take it, because she couldn’t take her daughter. Then, a Kindertransport spot opened, and she sent her daughter. The mother’s own window to emigrate had closed.

We will have a great task, Ian and I, to impart this history to Orli. Named for my grandfather, she will learn his story from us, but she will not have the benefit we had of growing up with those accents, of knowing that generation, of seeing those numbers tattooed on loosened skin, of learning of their bravery and of their loss. She will not have the tactile reminders of the period — only the name we’ve given her, as a reminder of how fortunate we are.

Our Good Fortune, the Flip Side of Separation