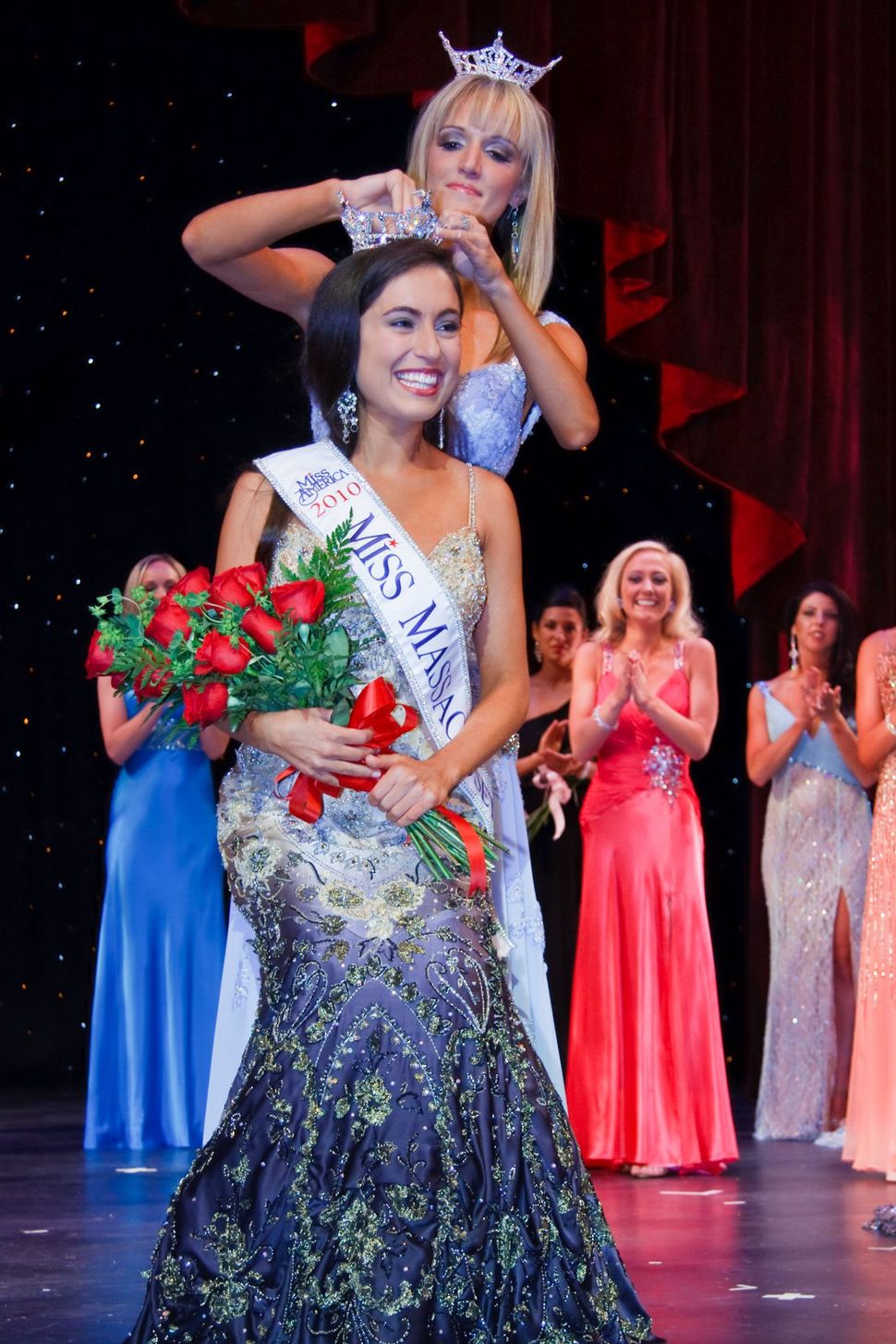 In the 89-year history of the Miss America pageant, there has been only one Jewish winner: Bess Myerson, in 1945. On January 15, there may be another: Loren Galler Rabinowitz, Miss Massachusetts.

The 24-year-old Harvard University graduate from Brookline is the daughter of two doctors, the granddaughter of Holocaust survivors and a novice when it comes to pageants, but she is no stranger to competition.

Galler Rabinowitz grew up skating with her mother. She “so liked having someone on the ice to talk to,“ that at age 9 she found a partner and became an ice dancer. At 14, she won her first national title, with David Mitchell, then placed fourth at the 2003 World Junior Championships and captured the bronze at the 2004 US Senior Championships.

In 2005, when Mitchell injured his shoulder, Galler Rabinowitz knew it was time to stop deferring her Harvard admission. “I was so excited to get back in the classroom and have a quote-unquote normal college experience,” she told the Forward.

In 2006, nine months after retiring from skating, Galler Rabinowitz embarked on a full load of premed and English classes and collected more accolades — in the literary arts.

As an upperclassman, she was selected to work on her honors thesis with the 1996 Pulitzer Prize-winning poet Jorie Graham. It was a book of poems that paid tribute to the wartime experiences of her maternal grandmother, Eva Galler, who by jumping off a train en route to the Belzec extermination camp managed to be the sole survivor when the Nazis killed her family.

As Galler Rabinowitz approached her May 2010 graduation with high honors, she applied to 21 medical schools and planned to spend a year working for in the not-for-profit sector, despite the looming financial burdens of medical school.

Little did she know that a random trip to a dress shop would propel her appreciation for public service onto the national stage.

At the shop, she ran into Michelle Neves Hantman, Miss Massachusetts 2000, who mentioned that the Miss America Organization offered generous scholarships specifically for women going into medicine. To be eligible, she had to enter just one local pageant.

“I thought, ‘Hmm — I don’t know if I can win a beauty pageant,” Galler Rabinowitz said, “but if this is an application by essay, I have a shot.”

In March 2010, toward the end of her senior year, Galler Rabinowitz finessed a private interview, an onstage question and the swimsuit, evening wear, and talent portions to win Miss Collegiate Area, a competition open to anyone living in Massachusetts. “All of a sudden, I’m qualified for the state pageant,” she said.

In June, she won the title of Miss Massachusetts, as well as the state’s talent portion by playing a piano suite composed by one of her father’s cousins, Leonard Bernstein.

“More than anyone putting a crown on my head, the moment I remember is catching eyes with my mom and seeing how incredibly proud she and my father were,” Galler Rabinowitz said.

Especially, she added, because “I’m sort of coming out of left field; I don’t fit the [traditional] profile.”

In addition to standing only 5 feet 2.5 inches and being the only Jewish 2011 Miss America contender, Galler Rabinowitz has no entourage and a minuscule history of competitive pageantry.

“Anthropologically, it’s been so interesting to do this,” she said.

The eye-opener has worked both ways, as Galler Rabinowitz fielded questions from other contestants about keeping kosher and about her Conservadox Jewish lifestyle. She also writes her own material.

“All through my college career, I heard: ‘Oy, why are you majoring in English? You’re not going to have any skills to prepare you for anything.’ Au contraire. Speechwriting-on-the-fly skills are coming in handy like you wouldn’t imagine,” she said.

So is multitasking. Currently, she spends half her day coaching skaters and tutoring students in writing, math and SAT preparation, and spends the rest of the day in a tiara, performing community service and speaking at charity events.

“The accoutrements are exciting,” she admitted, “but they’re not as important a having the ability to speak and have people listen.” Again, she cited her grandparents’ influence in New Orleans, where they relocated after the war and were increasingly embraced by the community the more they shared their background.

“I want to take an opportunity to pick up where my grandmother left off,” Galler Rabinowitz said. “I speak frequently at schools, and I make a point not to talk about things I’ve achieved, but about where I come from and why I am who I am.”

Unfortunately, Galler won’t be in Las Vegas for the January pageant. In 2005, After Hurricane Katrina, Galler found her home destroyed — including photos of her family, who had all perished during the war — and according to Galler Rabinowitz, she spent so much time in the contaminated home that she lapsed into a coma and died in 2006.

But Loren’s “virulently optimistic” 89-year-old grandfather, Henry Galler, will be watching from Dallas, where he has since relocated. (Henry survived the Holocaust by serving in the Polish army in the Soviet Union, and was miraculously reunited with his childhood friend, Eva, at a friend’s wedding after the war.) In addition to her grandfather, her parents and her twin younger sisters, Galler Rabinowitz hopes one other person will be watching: Myerson.

Recently, in Atlantic City, the pageant’s longtime home, Galler Rabinowitz made certain to find Myerson’s portrait in the convention hall and take a slow walk down the boardwalk “to get a sense of the magnitude and historical legacy. I think at that point, I understood why my grandfather was so excited about it.

“Imagine having lost everything — your family, your belongings, your sense of identity — coming here, wholeheartedly embracing this country and having three girls who earned graduate degrees in law, business and medicine, respectively, and a grandchild representing the state, and maybe even a nation. It’s so exciting.”

Aimee Berg is a writer living in New York.