The Case Against the Sheitel 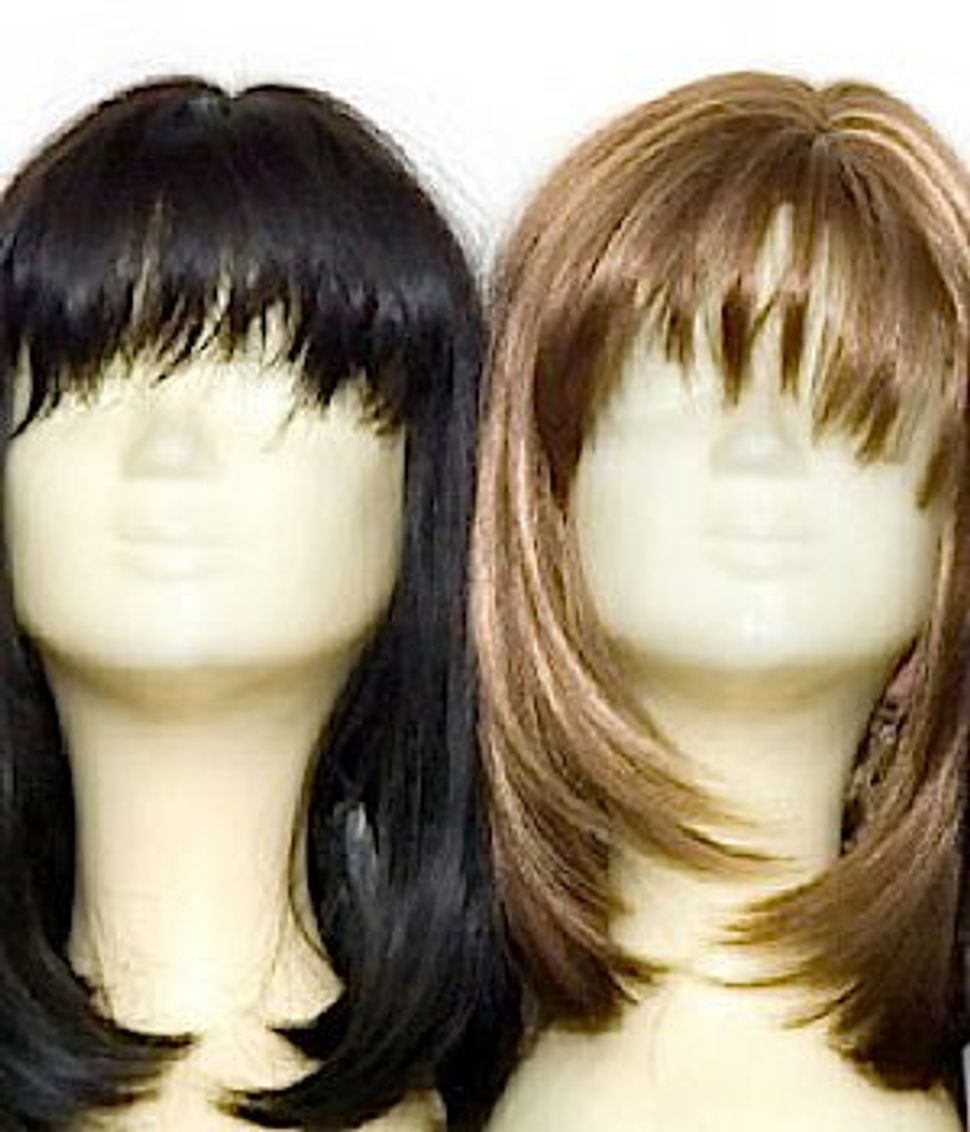 “Do you like the blond better? With or without the ponytail?”

Wig-shopping is the new initiation into religious life for women, writes Tali Farkash, a Haredi columnist for Ynet who alternates between defending religious life and kvetching about it. If women used to accompany brides to the mikveh in order to welcome them ritualistically into the club of married women, she says, today a trip to the sheitel macher, or wig-maker, is the thing to do. Farkash, who recently accompanied her friend to get a wig, is still recovering from the experience.

Her friend sat “right there on the seat of honor at the sheitel macher’s,” Farkash writes, “surrounded by relatives whose job it is to say ‘That looks so nice on you!’ and to elegantly avoid the obvious questions about the net in front that presses on the forehead, or the sadistic job of the comber. There is something bittersweet about sitting on the waiting couch as a support, witnessing the metamorphosis… from permitted hair to forbidden hair.”

The sheitel is undoubtedly one of the strangest customs of modern Jewish life. No matter how many perky rebbetzins try to write funny or pedagogical blogs to rationalize this practice, there is no way to make this normal or sane. “Every attempt to take the discussion out of the religious-halachic loop is doomed to failure,” Farkash writes.

The language of human morality has no way to make sense of this. That’s not to say people don’t try.

A glance through the online comments offers a glimpse into the wide range of thinking on matter in the religious world. One anonymous commenter writes that it’s a “shame [Farkash] doesn’t see the beauty in it.” Meanwhile a Haredi man calling himself “gever gever” (“man’s man”) writes: “The wig is even more sexually stimulating than your hair! I’m a Haredi man and I implore you women, please shave your heads! I can’t take the stimulation of a full head of hair!!” And “Dana” writes, “A wig is forbidden in the Torah … Whoever thinks that a wig is the more religious (mehudar) head covering is really, really wrong because the wigs are nicer than the woman’s own hair….”

The sheitel also creates a whole set of demands on women’s bodies in which they have no say, regardless of the imposition on both physical and emotional comfort (just one more set of demands, perhaps), evokes many questions about women’s freedom of movement in this culture. “There is no room to breathe in personal feelings,” Farkash writes a bit enigmatically. “Those feelings remain to be whispered among close friends, the secret of married haredi women.”

Wigs lack all moral, ethical and rational value. After all, the concept that a woman’s hair is too sensual — as offensive as that is to begin with — is not alleviated when the hair is replaced by the permanently well-groomed hair of some other woman that just happens to be detached from a scalp. The logic is completely flawed, and the moral argument is completely vacant.

But the problem is worse. Because when confronted about these paradoxes, the answer is “I’m following halacha.” So following halacha means turning off one’s own mind and heart and doing what everyone else is doing. It’s about fitting in with the crowd even if it makes no sense and is a terrible imposition on women. If wearing a wig represents what the culture of halacha has become, then that culture has lost its basic value. It is no longer a moral guide, just a social one.

To me, the sheitel represents all that is wrong with Orthodoxy today. Emptiness of meaning, a disconnect from basic morality, following the herd, and the oppression of women. Doing all that, and then calling it halacha. As if.

These days, as I observe social trends in the Orthodox world, I’m not even sure what halacha means anymore. But I can say with all certainty that this, the sheitel and all that goes along with it, is not Torah. It is not beautiful, it is not spiritual, it is not inspiring, and it is not good. I’m waiting for some Haredi women to say this out loud, but I don’t see it happening any time soon. The social pressure is just too great.

The Case Against the Sheitel