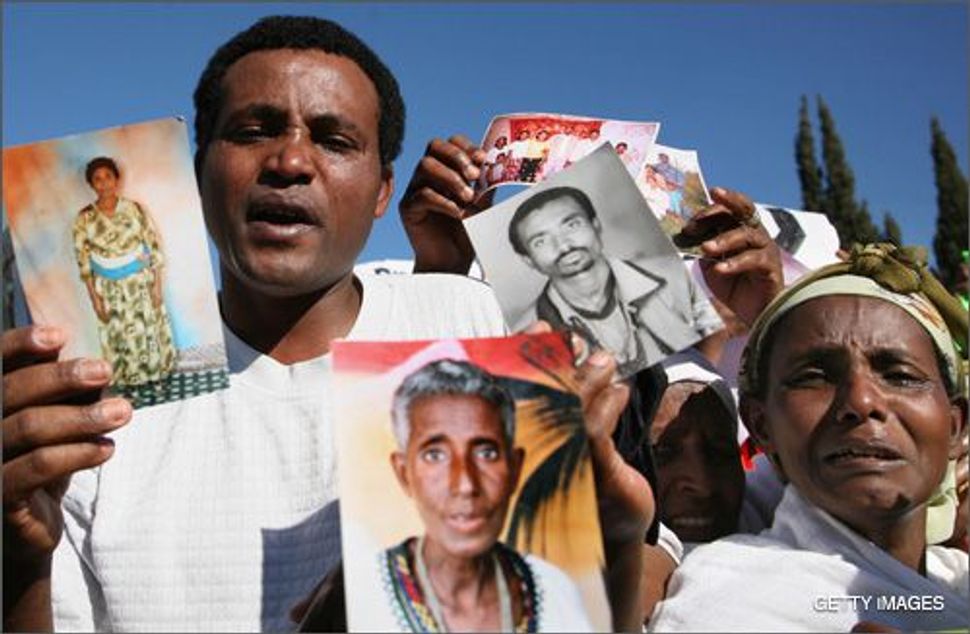 The contentious debate over the immigration to Israel of the Falash Mura — Ethiopians who claim descent from Jewish converts to Christianity — is pitting the two Ethiopian members of Israel’s parliament against each other.

Even as Israel’s government has declared an end to the mass-immigration of the Falash Mura, Ha’aretz reports that Mazor Bahyna an Ethiopian member of the Knesset from the ultra-Orthodox Shas party, says that there are more 300,000 people left in Ethiopia who should be eligible to immigrate. “We have historical evidence and letters of Kessim [Ethiopian Jewish religious leaders] on the fact that forty years ago, there were more than 50,000 converts who were forced to change their religion,” Bahyna said.

Meanwhile, Ethiopian Knesset member Shlomo Molla of the centrist Kadima Party, says that there are 5,000 Falash Mura left in Ethiopia who still need to have their claims analyzed, but that after this, the government should bring the immigration to a close. “This is a political decision that the government needs to make. If we continue to drag our feet on the issue, the breach will be grow and limitless numbers of Ethiopians without any connection to the Jewish people will be able to come here,” Molla said.

Ha’aretz offers the following analysis of the rift:

The dispute between the two lawmakers reflects deep divisions of opinion within the Ethiopian Israeli community as a whole. While some call for the bringing to Israel of anyone who declares a connection to the Jewish people, others say that many of those in Ethiopia seeking to immigrate are simply lying about their origins.

Ha’aretz itself has weighed in firmly in opposition to the absorption of the Falash Mura, taking a particularly strong stance in an editorial earlier this spring:

The government decision to stop handling the immigration of the Falashmura starting in early June is a worthy move that comes much too late. As illustrated by a series of articles currently being published in Haaretz, a strange coalition of “liberal” American Jewish organizations, rabbis from the messianic branch of religious Zionism and Shas leaders have, for too many years, succeeded in imposing terror on the Israeli establishment and brought to Israel about 26,000 Ethiopian citizens who do not match the Law of Return’s criteria for new immigrants.

The Falashmura are not Jews. For many generations, after their ancestors converted, they lived as Christians in Ethiopia. Now they want to exploit their Jewish roots in order to leave one of the poorest countries in the world and to live as welfare recipients in Israel. It is impossible to assess the social and economic price the country has been paying for years for this “aliyah,” and because every additional “oleh” will naturally demand that his family be brought, this is a time bomb that only becomes more powerful over the years. Bringing them to Israel has no connection to Judaism or Zionism.