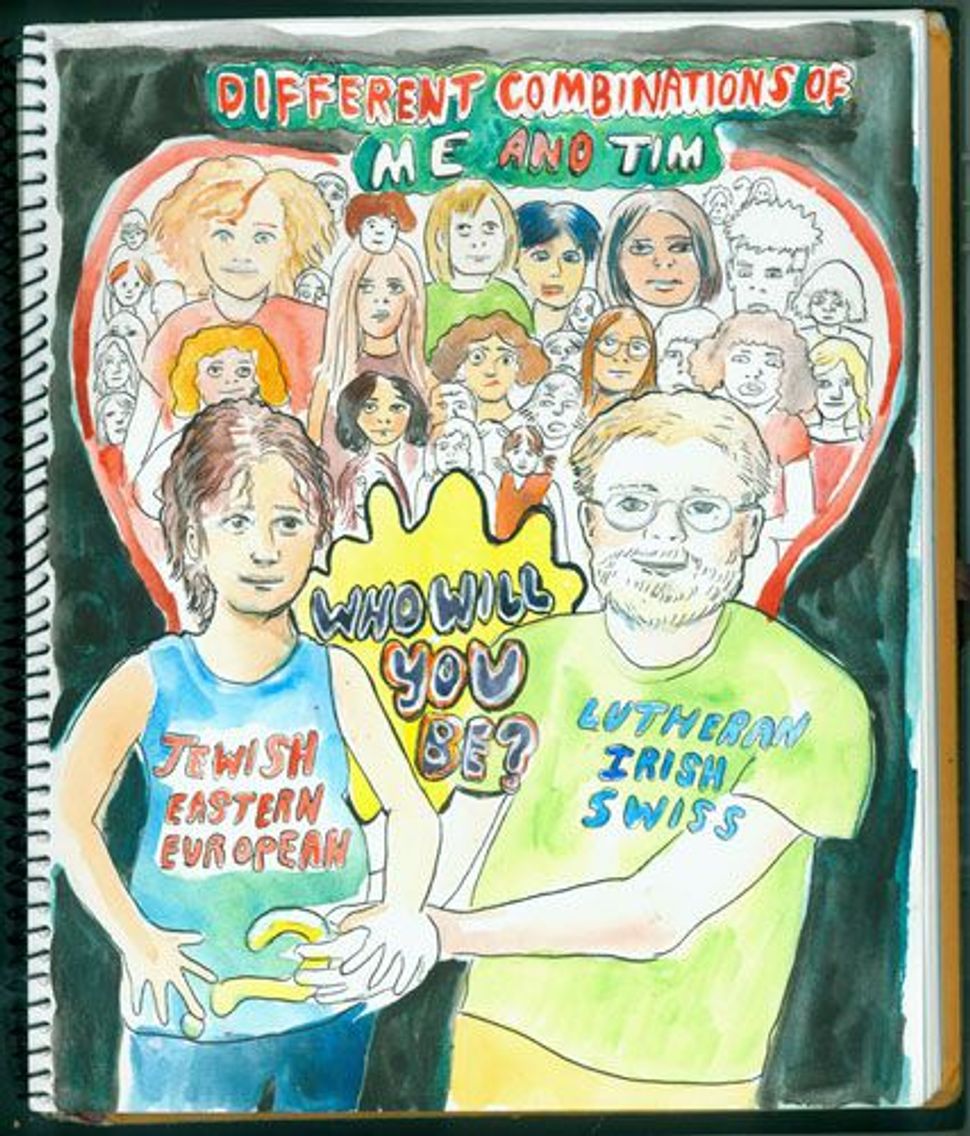 ?Different Combinations of Me and Tim,? Weinstein?s piece featured in ?Graphic Details.? Image by Lauren Weinstein

“Graphic Details: Confessional Comics by Jewish Women” is the first museum exhibit to explore this unique niche of autobiographical storytelling by Jewish women. The touring exhibit, sponsored by the Forward, features the work of 18 Jewish women artists. The Jewish Women’s Archive — whose Jewesses With Attitude blog partners regularly with The Sisterhood — is interviewing each of the artists about their work and their experience as a female, Jewish graphic artist. This week’s interview is with Lauren Weinstein whose comics first appeared as syndicated strips in the Seattle Stranger and gURL.com. Weinstein published her first solo comic, the Xeric Foundation award-winning Inside Vineyland, in 2003. Her story collection “Girl Stories” was published in 2006.

Leah Berkenwald: How does your Jewish identity influence your work?

Lauren Weinstein: My Jewish identity manifests itself in my personality with neuroses and self hatred and obsessive compulsions for whatever is going on in my life (right now it’s making curtains for my house; I look online at least five times a day for the best deals on textiles). Also a bleak and cynical world view which my Atheist grandfather gave to me, and also the constant urge to kvetch. So basically all the negative aspects of my personality I can attribute to being Jewish, but I also feel it gives me the power to laugh about it all.

Do you think the experience of being a cartoon artist is different for men and women?

I think most of all the expectations for what kind of comics you make are different. If a woman wants to make a fantasy superhero comic everyone scratches their heads. People expect women to make memoir comics.

Tell me about your piece in the Graphic Details exhibit. What’s its story?

The show has a sketchbook page that I made when I was pregnant where I imagined all of the different combinations of my husband and I and what our baby might look like. I love looking at it now and seeing which girl might be closest to Ramona, our daughter.

I’m working on the sequel to “Girl Stories,” which I must finish this year because I have a zillion more projects I want to do: a book about pregnancy, a children’s book or two, and more weird science fiction stuff.