Facing Down Infertility — With the Help of Graphic Art, Immersion 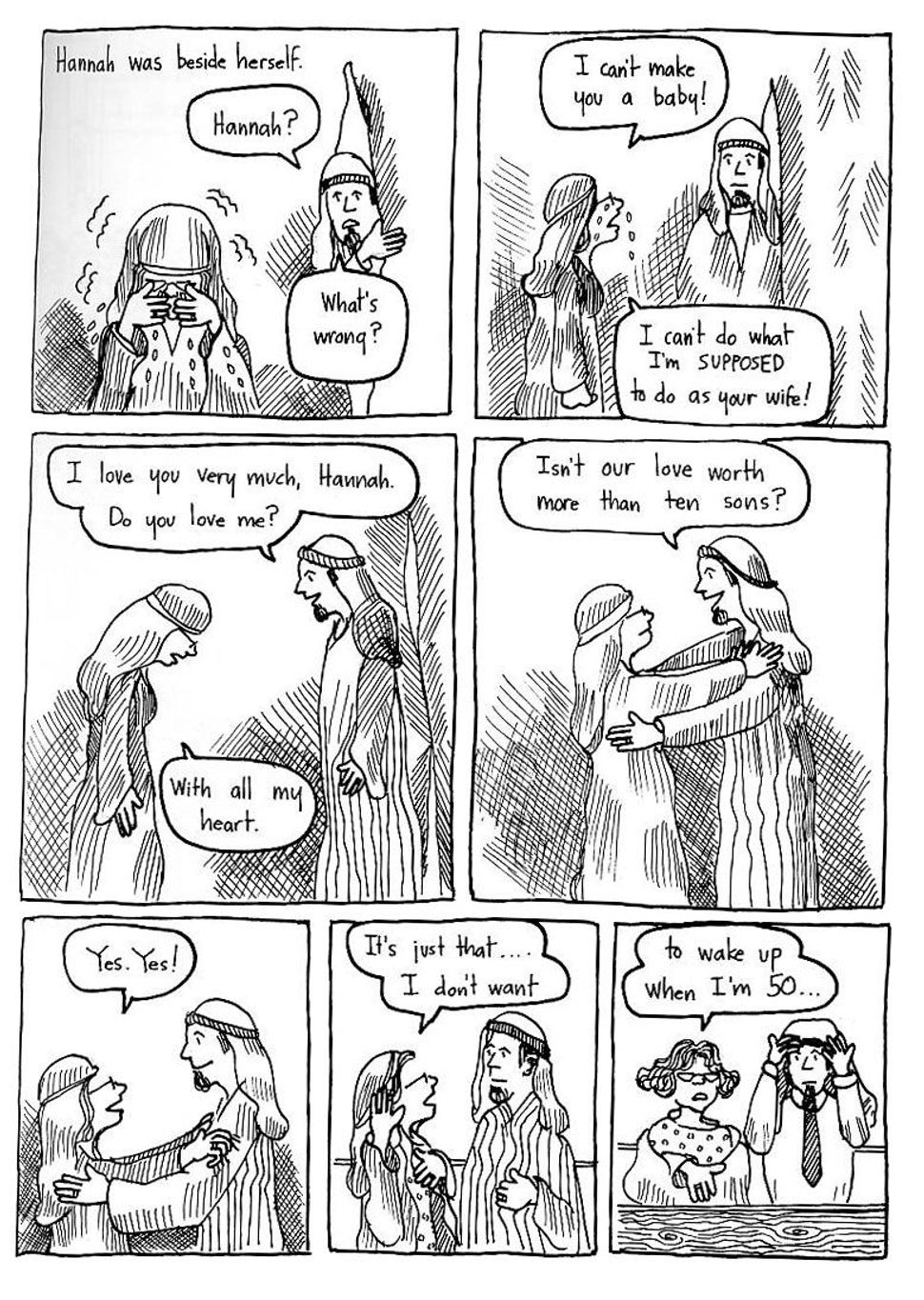 A selection from ?Good Eggs? (click to enlarge). Image by Phoebe Potts

Her eyes twinkling behind oval glasses, author Phoebe Potts led seven of us into the kitchen of the education center at a suburban Boston community mikveh. She lit a piece of paper on fire in the sink, and then urged us one at a time to toss our slips of paper into the flame. On that slip of paper each of us had written what got in the way of our voice — as writers or artists. Then, we symbolically destroyed what Potts refers to as our “internal mugger.”

Welcome to the irreverent, frank, poignant, and often hilarious world of Phoebe Potts, the 40-year-old author of “Good Eggs. ” The graphic memoir, published last year, chronicles her attempts to find a mate, to deal with depression, to come to terms with her Jewish faith (she is a child of an interfaith marriage) and, especially, to navigate a painful battle with infertility.

Why so much humor, asked a participant at Potts’ free writing workshop held Sunday at the Mayyim Hayyim Living Waters community mikveh and education center in Newton, Mass. “It’s part of the Jewish gestalt. If we didn’t laugh, we’d cry,” Potts said.

The mikveh where Potts taught the workshop was founded by bestselling author Anita Diamant. The workshop is a part of Mayyim Hayyim’s efforts to deal with the myriad of issues women may bring with them into a mikveh. Potts, a resident of Gloucester, Mass., was a natural fit because her book covers infertility as well as her complicated path to Jewish engagement, Aliza Kline, the executive director of the mikveh, which co-sponsored Potts’ workshop with Jewish Family & Children Services.

Kline said she has noticed a growing number of women who want to come to the mikveh as they are trying to conceive. These are women who may have never used a mikveh before, but see the immersion and the mikveh as a “healing space,” she said. They begin coming regularly to the mikveh as they try to conceive. The mikveh does ask people why they want to immerse so attendants know how to greet them when they enter. A book at the mikveh provides prayers for all types of immersion ceremonies, including for someone dealing with infertility or recovering from a miscarriage.

Founded as a community mikveh for Jews of all branches, Mayyim Hayyim sees itself as a place for healing as well as for practicing the ancient Jewish ritual of immersions in between menstrual cycles. Like many other community mikvehs around the nation, Mayyim Hayyim encourages non-traditional uses of the ritual bath. Women, and sometimes men, come there to mark happy and traumatic milestones, including big birthdays, the end of cancer treatments, and the finality of a divorce.

The association of infertility with the mikveh has always been there: If you are frequently pregnant, you visit the mikveh less. The difference is that the Newton mikveh staff is trying to bring the issue out more in the open with such events as the Potts workshop.

“People don’t talk about it. You talk about it afterwards,” Kline said of infertility. “Phoebe talks about this beautifully in her book, how it feels when you have a friend who’s pregnant.” Potts, who along with her husband is now trying to adopt a child from Ethiopia, told us bits and pieces of her story during the workshop.

She also said that becoming a published author was largely a matter of luck: A writer friend at the Gloucester synagogue where she teaches Sunday school, asked to show some of Potts’ cartoons about infertility to her agent. Around the same time, two other comic memoirs by women had just been published. “I was the right infertile female comic memoir book artist at the right time,” Potts said.

During the Mayyim Hayyim workshop, she had us divide our lives into three parts — ages 0-10; 10-25; 25 until now — and write down key words in each area. Then we tied the pieces together in writing. A 49-year-old career counselor read from her last section — how she is still hunting for love, and yet has managed to find satisfaction. “I have a right not to live in sadness,” she said.

In response to a question from a participant, Potts demonstrates how she tells her own story by pointing to a panel of her work on display at the mikveh — a drawing of her sitting on a yoga ball, with eight arms that each reach out to a different caption balloon. “I went to Smith!” “I untangled my issues in therapy.” “I worked for the poor!” “I married a nice (partially) Jewish boy!” “I recycle.” “I vote!” “I eat my greens.” “I go to yoga!” That page leads to the next– a picture of Potts standing on earth, her arms outreached to the universe, screaming, “SO…WHERE’S MY BABY?”

She pokes fun at herself, her situations, and her family, including her mother, who has had a mixed reaction to how she is depicted in her daughter’s artwork.

Potts recounts hearing her mother make negative remarks as they walked by some Hasidic Jews. She also writes about her mother’s passion for celebrating Christmas, even though she also insisted on sending Potts and her brother to Jewish Sunday school. “My ma makes me mental, but I do love her, and her Jewish Xmas,” Potts writes at one point in her memoir.

That same mother is one of her biggest fans, the author said with a grin. Listed as the first reviewer of Potts’ book on Amazon.com is M. Potts, a.k.a Bookie. She writes as her review of “Good Eggs”: “I laughed out loud until I remembered it wasn’t someone else’s daughter….You should buy this book….never mind how I’m feeling.” It’s signed “Phoebe’s Mother.”

What’s next for Potts? She and her husband, artist Jeffrey Marshall, are awaiting news from Ethiopia about the baby boy they hope to adopt. The boy is not yet 1. “The book I’m writing is the adoption story, and I don’t know how it ends. I’m really in the muck right now,” she said.

Linda K. Wertheimer, a Lexington, Mass., writer, is writing a memoir about how her journey through grief led her closer to Judaism. Follow her on Twitter @Jewishmuse. Her website is http://lindakwertheimer.com.

Facing Down Infertility — With the Help of Graphic Art, Immersion