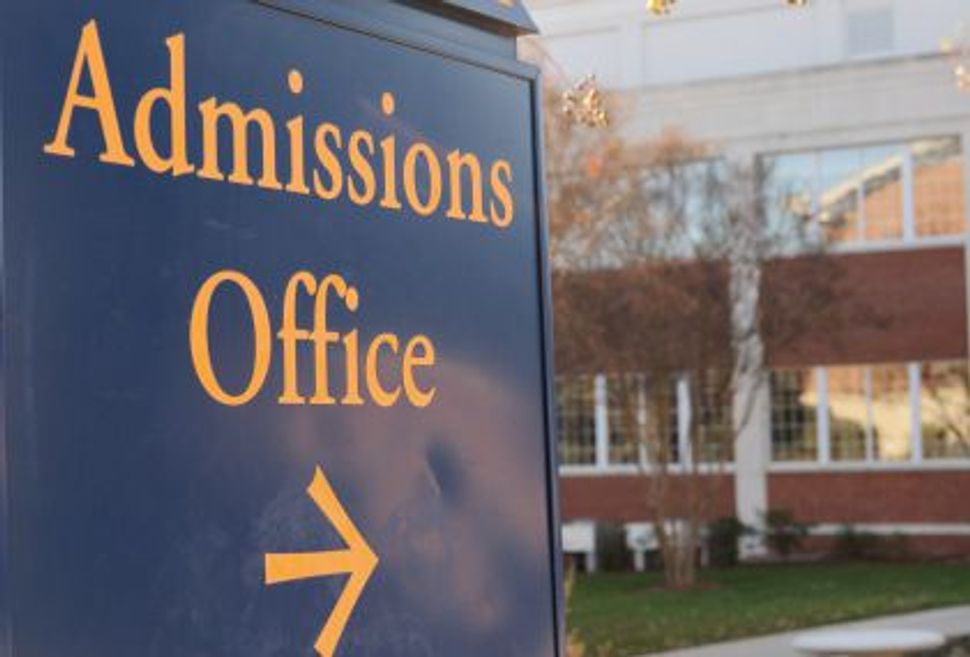 Though untold numbers of people go through it each year, the process remains opaque and an emotional rollercoaster. So bubbeles, that none of you should suffer the sphilkes and tsuris my friends and I endured through this year-long process, I am here to offer my Jewish Mother’s Guide to College Admissions.™

This year, most competitive schools saw a significant increase in applicants. This article lays out the statistics clearly.

College admissions is, let’s face it, a huge industry. Colleges market themselves to your kid, the College Board charges plenty for all those iterations of the SAT your kid feels pressured to take, you shell out big dough on test prep, on traveling to visit colleges and on college application fees, and at the end of the day you are left to hope and pray that your child will be admitted to a college that will be a good fit for him, and one you can actually afford.

Trying to retain a toe-hold in sanity against the tide of college application pressure begins in a child’s junior year of high school. If the child has done well on the PSATs, that triggers the colleges’ marketing machines. Just registering for the SATs at the College Board requires filling out a questionnaire with pages and pages of questions about your child’s every imaginable interest and inclination. Why? So the College Board can sell the information to the colleges that will bury you under a deluge of direct mail. Most amusing was the number of Christian colleges that sent Boychik missives urging him to apply and touting their “Christ-centered” approach, doubtless because he checked off religion as a potential college major.

Tip: Register a unique email address just for the college-related stuff, like “boychikcollege@gmail” so that it doesn’t fill up your regular inbox.

Tip: Ease into the experience by doing some reading. Get a copy of the book “The Gatekeepers: Inside the Admissions Process of a Premier College,” by New York Times national education reporter Jacques Steinberg. Though it was written several years ago, nothing has likely changed, except for the astronomical numbers of applicants to each selective private college — and, of course, the tuition. Steinberg shadows an admissions officer at Wesleyan University and offers vignettes about seniors from a diverse range of high schools, from a prestigious Los Angeles private school to a Native American high school in New Mexico to a New York public high school. Each of the kids has their strengths and weaknesses, challenges and advantages. Even more importantly, each of the admissions officers portrayed has his or her priorities and preferences. And there is no way to know what they are.

I read Steinberg’s book just last in December, when it was far too late to impact our strategy. That’s right, I said strategy. Because, bubbeles, you need a strategy. And I mean one more sophisticated than General Petraeus’s.

More suggested reading (more useful than any of those oversized guides to colleges everyone buys): The New York Times’s blog “The Choice,” written by Steinberg and others. It will provide you with more data and points of view about college admissions than you ever wished to absorb.

The antidote to this information overload? A nice, stiff drink. Or two. Or one for each college application fee you anticipate shelling out.

Tip: Invest in the best college consultant and SAT preparation you can afford. My husband has access to a free college consulting service through his employer. But I regret not having sucked it up and spent the shekels on a private consultant, for at least a meeting or two. Here, as in most things, you get what you pay for. Though I am constitutionally disinclined to feed in to the college application frenzy, this may be one area where it’s worth investing as much skin as you can put in.

So too with test prep. It’s ridiculous how much weight colleges give to SAT numbers (a tidbit gleaned from Steinberg’s book) and more ridiculous to think that a standardized test score from a given day is taken into as much — if not more — consideration as three years of school grades. But, apparently, they are. The college admissions industry’s response to this? “Score choice,” in which some schools accept the best SAT score from the two, three or more times your child has taken each test. This, of course, merely fuels the testing and scheduling pressure.

Another central piece of the college application is, of course, the essays. Be prepared to coach your kid through writing multiple application essays that are deep yet funny, emotionally intelligent yet light-hearted, hoping that they will convince the college admissions officer that this child more than all the other good-students-pretty-good-test-takers-is-involved-with-interesting-activities applicants deserves to be admitted.

Tip: In those essays, exploit every possible minority/unusual angle. Years ago, my father’s cousin asked me to take a look at her son’s college essay before he sent it off. It focused on this young man’s being Hispanic and, because I’d only known him as an Ashkenazi-white-Jewish family member, I wondered why he was focusing on the fact that his Jewish upper-middle-class-doctor father is also Nuyorican. Now I get it.

No matter how hard your child works, though, or how smart and accomplished she may be, disappointment lurks around every corner of the college admissions labyrinth. I have heard more heartbreaking stories the past few weeks than I thought possible, about:

•Smart, talented kids who only applied to one or two colleges (clearly none of them have Jewish mothers) and did not get in anywhere.

•Kids who have been wait-listed at every school they applied to.

•Kids who did not get into any of the half-dozen or more schools they applied to, or were admitted to only their fall-back option.

•And then there are the smart, talented kids who got into schools they want to attend — and can’t afford to go.

Waiting to see what financial aid each college gives you is even more tortuous than waiting to hear if your child has been admitted. Many colleges don’t send both decisions at the same time, so you are left in a state of suspended animation even if your child has gotten into the fabulous private college where you most want to see him. He is thrilled and you cannot be, because you are worried that you will not be able to afford to foot the bill and it makes no sense at all for anyone to finish undergraduate work with $200,000 — or more — in student loan debt. I was heartbroken when Boychik had been notified that he was admitted to a couple of the good schools where I knew he would be happy, but the “financial aid” we were granted was all loans, and even those would be a drop in the bucket of the $50,000-60,000 it costs each year to attend most private colleges today.

Here is my last tip: Apply widely. The fantastic college Boychik will likely attend (unless they chase him with flaming swastikas on admitted-students’ weekend) was not on any of our lists of colleges where he planned to apply. I went into a bit of a panic after he was rejected by the total-long-shot he applied to Early Action. The rest of the list was heavier on “safeties” and “solid” choices than it was on “reaches.” We threw in this college of Boychik’s (new) dreams because it has strong departments in each of his interest areas and is close to home (my priority) but not too close (Boychik’s). This time, the long-shot came through. And to my profound relief, this college has granted us the financial aid we need to send him.

Time to sign off now, bubbeles. No rest for the weary: Girlchik’s bat mitzvah is fast approaching. But before I set my mind to planning, I think I’ll have that drink.