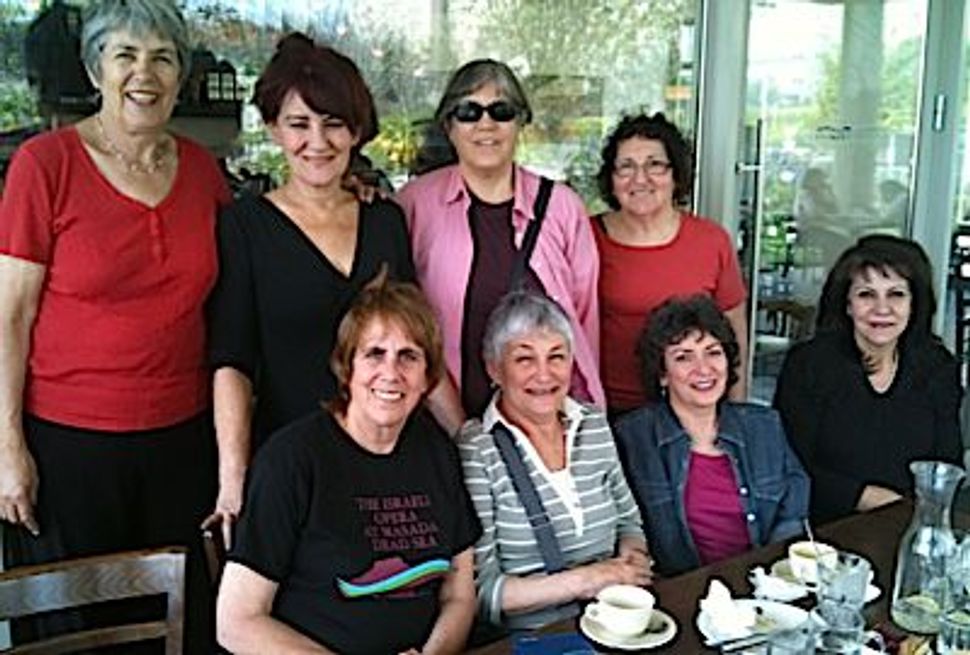 These women have meeting Fridays for breakfast for the past 25 years. (click to enlarge) Image by Renee Ghert-Zand

On a recent Friday, Karen Lakin, an English teacher who made aliyah to Israel from Connecticut with her husband and two teenage children in 1984, invited me to a café on the Giv’at Ram campus of the Hebrew University to meet the others in her breakfast club. Eight of its nine members were in attendance, including six Jews and two Christians, one of whom is an Arab, originally from Kfar Qana near Nazareth, who now lives in Beit Safafa, Jerusalem.

For the past quarter century, the women have been meeting every Friday for brunch at a café somewhere in the city, no matter the weather or the security situation. The women also have a book club, share an opera subscription, eat Shabbat and holiday meals at each other’s homes, and celebrate birthdays and American Thanksgiving together every year.

Since most of them don’t have many relatives in Israel, they quickly became each other’s family. “In fact, it’s closer than a family, because we chose each other,” said Arlene Yaakov, who is originally from New Jersey and who, in June 1967 at the outbreak of the Six Day War, took the first Israel-bound plane she could catch out of the U.S. so she could volunteer on a kibbutz. “I drove straight through from Los Angeles to New York to get on that plane,” said Yaakov, a tour group coordinator.

A couple of them immigrated with their husband and children. Other married members, originally from the U.S., England, Canada and Australia, met their husbands in Israel. As the women’s friendships grew, so did their families. They all know each other’s spouses, children and grandchildren — many of whom join the women for various holiday celebrations and lifecycle events. Lakin’s daughter, Manya Boteach, once remarked, “It’s like having a group of good aunts. They are interested in you and help you, but they don’t tell you what to do.”

“We’ve been together through divorces, deaths of parents, marriages, babies, illnesses,” reflected Lakin. “Medical issues are big at this point,” she half-joked as she looked at the mature faces around the table.

Liz Kopp, with flaming upswept red hair and a youthful demeanor, is the wife of a pastor, the mother of seven and a gospel rock musician. The daughter of political refugees from Czechoslovakia — her father was also a pastor — she grew up in Chicago, and came to Israel on a church tour for teens in the late 1960s; she found the place “electric,” and has lived in Jerusalem ever since.

Breakfast club members agree that Inaam Copty is the most glamorous of the group. The mother of five arrived for brunch fully coiffed and elegantly dressed in a skirt and high-heeled pumps. Everyone at the table made a point of praising Copty’s prodigious culinary talents. The author of a cookbook, she specializes in Middle Eastern food that uses “the best and freshest ingredients.” Accordingly, she only orders coffee at these Friday gatherings. “She only eats homemade cooking — usually her own,” explained Batya Dashefsky, who made aliyah from Philadelphia in 1969, and was sitting next to Copty.

In response to the inevitable question as to how politics play into relationships within the group, Copty said, “We all teach our kids to love people. At the same time we each have our own political views.”

Lakin elaborated, “We’ve known each other for so long that we all know what the other is thinking or doing politically, but it doesn’t matter.”