On Fashion’s Abiding Love Affair With the Stiletto Strut 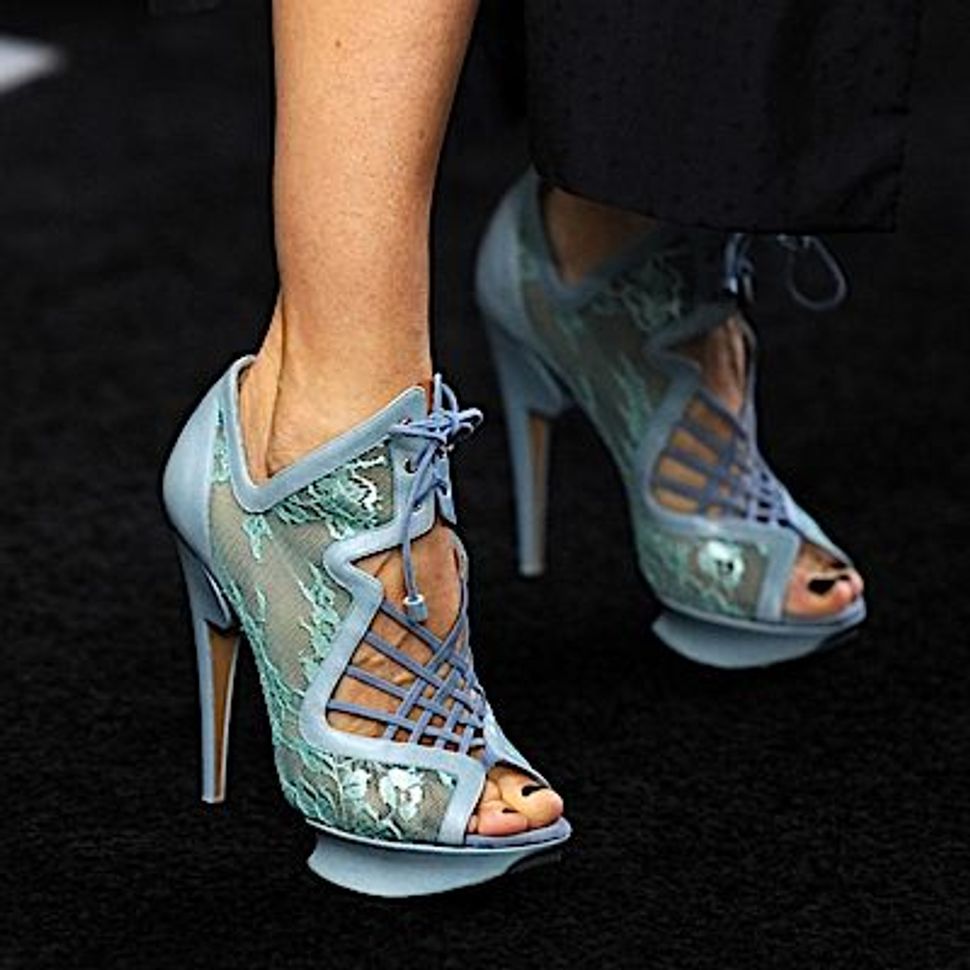 A close-up of the heels that Sarah Jessica Parker wore to the 2010 premiere of ?Harry Potter and the Deathly Hallows.? Image by Getty Images

Yesterday’s New York Times featured an interview with Glamour magazine’s editor in chief Cindi Leive about what she wore last weekend. The title of the piece was “… And Heels, of Course.” “I always wear heels to work. Once I had a bum ankle and was ordered to wear flats; I felt as if I was walking into the office naked,” Leive explains.

High heels, yes, what else would a successful woman wear? Flats? Meh! Too low-to-the-ground, too accommodating of movement.

It’s been seven years since the last episode of “Sex and the City,” but high heels remain the key symbol of powerful femininity in the eyes of fashion editors, costume designers and Madison Avenue.

Bravo just debuted a new show called “Pregnant in Heels,” about a “maternity concierge” who walks affluent and high-achieving ladies through the very grounding experience of child-rearing, and the Style network ran a reality show called “Running in Heels” about interns at Marie Claire. Advertisements for “lady” products like razors, yogurt and sanitary napkins often include the power-women-in-heels trope, and Hollywood loves a good stiletto strut — usually done by the Type-A female lead in romantic comedies. Case in point: Sarah Jessica Parker’s revival of her famous heel-trot in the upcoming “I Don’t Know How She Does It.”

Well Sarah Jessica, I don’t know how you do it. (In fact, I don’t even know that you really do considering the photographs of you and co-stars wearing Ugg boots in between takes.) Especially since high heels have gotten higher and higher, and more and more expensive over the last few years, the idea that they are, or should be, powerful women’s go-to shoes is increasingly both impossible and ridiculous. ($3,495 for 5 ½ inch heels? Never ever did a Chanel bag sound so practical!) In fact, even Christian Louboutin himself — he of the much lusted after red-heeled pumps — conceded to the impracticality of his shoes in a recent New Yorker profile, in which he explained that fashion magazine offices smell like locker rooms because everyone has a change of shoes under their desk.

High heels are pretty, shiny things and I do feel especially elegant when I wear them. (In New York City this means someone will be driving me around.) But I don’t just get their monopoly in popular culture on feminine strength. They don’t represent strength or success for me, and the reason they don’t is because they simply can’t. They are, by nature, incredibly limiting, especially at the now in-vogue over 3-inch heights.

On Fashion’s Abiding Love Affair With the Stiletto Strut