Teaching the Holocaust to Children, Without Giving Them Nightmares 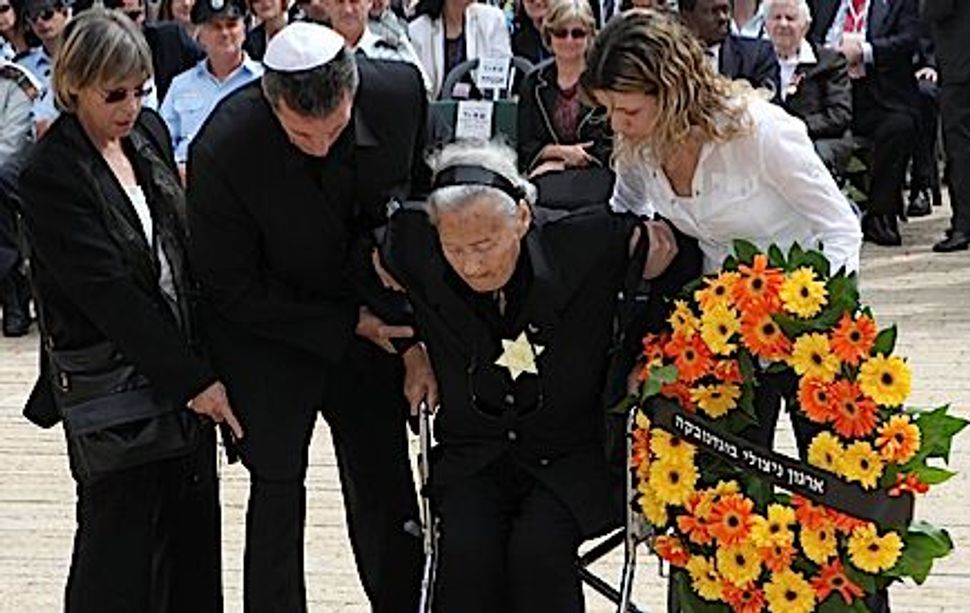 A Holocaust survivor gets help laying a wreath at a Yom HaShoah ceremony at Yad Vashem, May 2, 2011. Image by Getty Images

Holocaust Remembrance Day is an annual event in Israel. As in previous years, Yad Vashem held a moving ceremony honoring those who died in the Holocaust and those who survived through luck, a miracle and the help of neighbors and strangers.

At 10 a.m., the siren wailed — a mournful cry heard throughout the country. Jews around the country stood still, literally. Drivers stopped their cars in the middle of the street, opened the door and stood at attention.

For me, the one departure this year was my kids’ sudden curiosity about the Holocaust. Almost nine, our twins wanted to know exactly who in our families died during the Shoah.

In Israel, where children even younger than ours learn about the Holocaust in school, the question was inevitable. And although my husband, Sid, and I had been anticipating the question at some point, it was still a jolt, an electric shock of Jewish reality we had hoped to postpone a little longer.

“Do you know how many children died in the Shoah” one of the boys asked rhetorically? “A million!”

“Do you know how many Jews were killed in the Shoah?” the other one continued. “Six million!”

Our job as parents is to make our children feel safe while exposing them to the world around them. For us — Israeli Jews — it can be an excruciating balancing act between relaying history, or even the news of the day, and not giving our kids a months’ worth of nightmares.

We’ve leaned on the side of protectiveness, but last month we had no choice but to wake our kids up for school and tell them that Palestinian terrorists had murdered the uncle, aunt and cousins of one of their classmates. Since then, they’ve asked, repeatedly, whether our front door is locked.

Sid, whose parents were the sole survivors of their large families to make it out of Europe (they each had one sibling who had left before the war), had already explained that his parents, Bubbe and Zeideh, had escaped to Uzbekistan as the war unfolded.

This year we explained that on my side of the family, grandma’s mother lost an uncle and several cousins, and that grandpa’s mother also lost family.

We pray that our boys won’t seek out the details of the deaths until they’re old enough to absorb them.

How will they deal with the knowledge that virtually all of Sid’s paternal grandparents, uncles, aunts, and cousins — some tiny children — were murdered en masse in the all-Jewish town of Trochenbrod-Lozhist on Yom Kippur. The Nazis chose days when they knew most people in the shtetl would be in synagogue.

Maybe when they older, and they ask, we’ll let them watch “Everything is Illuminated,” a film based on Jonathan Safran Foer’s semi-fictionalized (and sanitized) account of the shtetl’s liquidation.

We don’t know the exact horrors that destroyed Sid’s mother’s family, or branches of mine, though we can guess. We don’t even know everyone’s names, though we’re trying to find out.

As Sid lit a memorial candle on the eve of Remembrance Day, I shared what the Holocaust and Israel mean to me, to instill my children with pride, not fear.

I told them I feel terribly lucky to live in Israel, the home of the Jewish people, “where we have the strongest army that can protect us. There can never be another Shoah because there is a state of Israel,” I said with a smile I didn’t quite feel.

“What if five armies attack Israel all at once?” one of the boys asked. “Then the armies of the United States and England and France and other places will come and help us,” I replied, more hopeful than certain.

At the memorial service at Yad Vashem, Prime Minister Netanyahu declared, “Today, there are new enemies threatening to destroy us.” “And let the world know, that when the People of Israel, and the IDF say ‘never again’ — we mean it.”

President Shimon Peres said that Israel’s existence “is our answer to the enemy: We have no other home.”

Sid and I were born and raised in the U.S. and our kids have American citizenship. We do have a second home to run to, God forbid, if necessary.

But our kids also know that if something bad happens in the world, Diaspora Jews like grandma and grandpa will have a safe home in Israel.

May they never need it.

Teaching the Holocaust to Children, Without Giving Them Nightmares