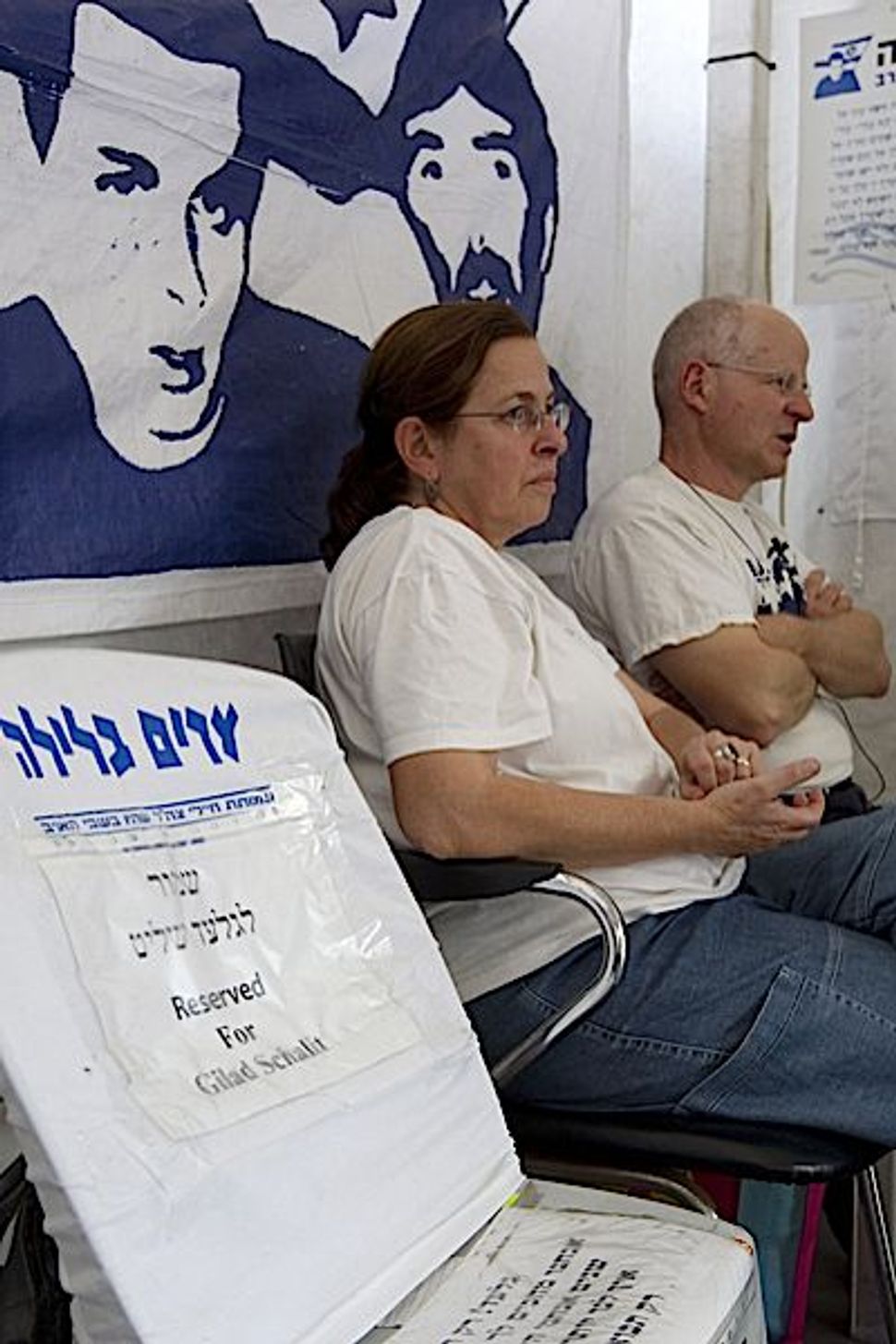 Aviva and Noam Shalit inside the protest tent set up outside of the Prime Minister?s residence. (click to enlarge) Image by Getty Images

Aviva Shalit strikes me as a broken woman. The mother of captured IDF soldier Gilat Shalit, she is often seen on the news as the quieter one of Gilad’s two parents. Noam, the father, is outspoken, calmly articulate and level-headed as he fights to bring Gilad back home. Aviva rarely speaks in public, but when she does, it’s with the passion of motherhood and citizenship that marks her pleas to the Israeli leadership to find a solution for her son’s release.

Yesterday, I saw her in person — the first time in Gilad’s nearly five-year captivity that I spent more than a fleeting moment at the Gilad Shalit protest tent outside of the Prime Minister’s house. I decided to go, on Israel’s Independence Day, after watching the heartbreaking footage of Yoel Shalit being forcibly removed from the Yom Hazikaron ceremony on Monday by a dozen security and police officers. The poor boy is doing everything in his power to help his brother, I thought, and at this moment it just seems like the whole world is standing in his way. So when Noam Shalit responded to that event by saying that the family was considering intensifying their actions, and was planning on spending Independence Day at the tent, I thought, the least I could do was show my support by spending a few minutes in the tent with them.

Truthfully, I did not know what to expect. I didn’t know if the tent would be full or empty — after all, on this holiday, the entire nation goes out to barbecue in the forest, and I wasn’t sure how many would be willing to pass up that venerable tradition to sit in a hot tent in the middle of Jerusalem. On the other hand, despite the reluctance to part with routine, Israelis deeply care about Gilad Shalit. Pop artist Shlomo Artzi, for example, one of several celebrities recruited to the Shalits’ campaign, has said that he thinks about Gilad every day, that he talks to his children about him, that he often wonders what Gilad might be doing at that very moment. In my family, we often talk about Gilad Shalit in similar terms — what is he doing now, what is the government doing to help him, what sacrifices are we willing to make for his return, will he ever sit at a table with his parents again.

The corner of Balfour and Azza in the center of Jerusalem where the tent is set up is filled with posters, flags, portraits of Gilad, and activists’ tables. Around fifty people are milling about, stopping traffic to ask drivers to sign a petition, take a bumper sticker or tie a yellow ribbon on their cars. A group called “Mothers for Gilad Shalit” seems to have taken charge, and is selling t-shirts and talking to people. I realize that that’s probably what I am, more mother than anything else, terrified by the thought of one’s child is lying in a dark cell somewhere with no way to free him.

Israel is such a tiny country; Gilad is probably less than 100 miles away, and yet he is tragically unreachable. I think of a book I have called “The Politics of Motherhood” about women’s protest movements around the world, and I realize that this is exactly what is happening here. This is about citizens trying to get the government to address reality from the viewpoint of mothers. Parents, really. Imagine leaders thinking first like parents and then like military strategists — therein lies the solution to world conflict, I have no doubt.

I walk into the tent where Aviva Shalit sits quietly, surrounded by about 10–15 people sitting in a semi-circle on plastic chairs. It’s like shiva, only worse. There is no sense that this is a healing process, that it will be over in a few days.

The whole way over, I thought about what I wanted to say — that I’m thinking about her, that I support her in her struggle. But when I encountered her in person, I was speechless. I started to say what I had planned — I looked to her friends to ask if it was okay and they replied, “Yes, of course, come in.” But it wasn’t really okay. She couldn’t speak. She couldn’t look at me. She was completely disconnected from the world around her. Just broken. Her life has been frozen since the day Gilad was taken, and she seems not to have taken a breath since then.

I had a long talk about all of this with my kids in the car-ride home. They were glad we went but upset that I signed the petition. Apparently they learned in school that in order to secure Gilad’s freedom, we would have to release terrorists, and they concluded that it’s a bad idea. I was surprised, truthfully, and a little annoyed that the schools are giving this message.

Youth is supposed to be the time when answers are simple, when activism is full-blown and solutions are clear and absolute. It’s hard for me to fathom that I, in my 41-year old jadedness, have become more of an idealist than my teenage children. Personally, I believe Gilad should be released at any price, because attempting to hold every potential terrorist in jail forever is not what will keep up safe but rather giving Palestinians real incentives for keeping the peace is what has a chance. But my kids, who are being brought up in a world in which terror and war are real — views bolstered by the certainty that soldiers can be randomly captured and held indefinitely — do not agree with me.

Maybe one day, when they become parents, we will see eye to eye. In the meantime, I will continue to keep Aviva Shalit in my own mother-heart.