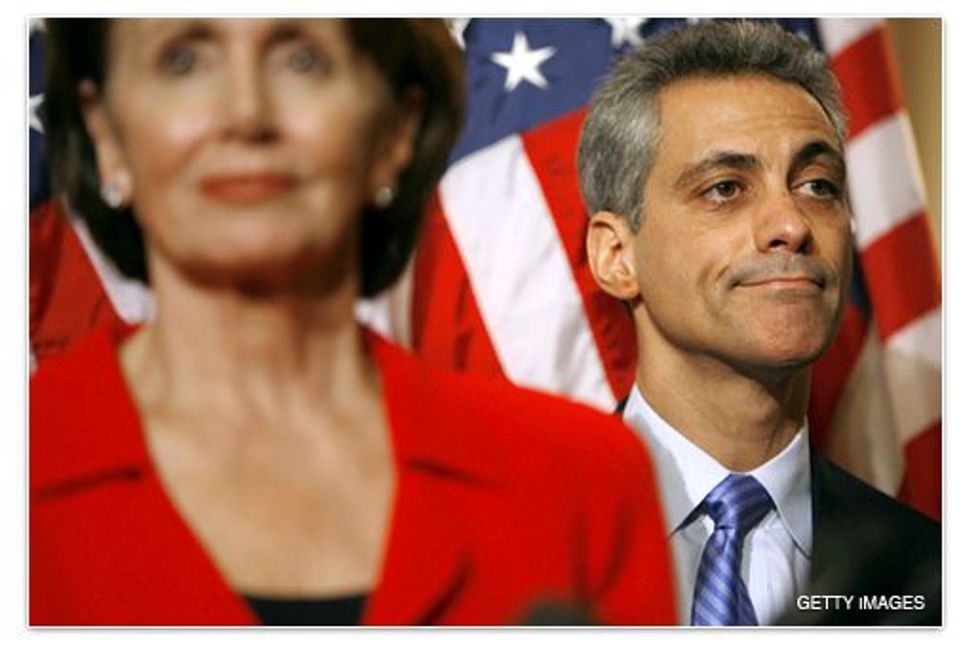 Politico examines the ambitions of Democratic powerbroker Rep. Rahm Emanuel, who is considered a possible Senate successor to Barack Obama in the event that the Illinois Democrat is elected president in November.

But Emanuel insists that he’s not interested in Obama’s Senate seat , which, Politico notes, begs the question, “What does Rahm really want, and what is his timetable for getting there?”

Politico reports that “before he was even elected to his first term as the congressman from the North Side of Chicago, Rahm Emanuel was telling friends that he had one goal in life: to become the first Jewish speaker of the House.”

…the private consensus among Democratic members, even among those who count themselves as critics, is that Emanuel is on the path to the speaker’s chair. Emanuel will have to do some fence-mending to get there, especially with some black and Hispanic Democrats he has offended over the years. But that obstacle is not seen as insurmountable for someone who, as chairman of the DCCC, gets the lion’s share of the credit for ending the GOP’s control of the House after 12 years.

“The whole question is one of time,” said one Democrat close to the current leadership team, speaking on the condition of anonymity. “Does Rahm want to put in the time to be speaker? Will he hang in there long enough? He is young enough to wait, but will he? His age [48] is a dual-edged thing. It gives him time to wait, but does he want to put in six or eight or even 10 years or more? I don’t know.”

Pelosi is 68. Majority Leader Steny H. Hoyer of Maryland is 69. Majority Whip James Clyburn of South Carolina turns 68 next week. If Pelosi serves another four to six years as speaker — the traditional tenure for the hugely demanding job — the two men next in line will be in their 70s by the time she steps down.

Incidentally, there would be a certain irony if Emanuel winds up getting Obama’s Senate seat: Emanuel was one of the few Illinois pols who didn’t jump on the Obama bandwagon during the primaries. He found himself in the sticky situation of choosing between the Clintons — who had given him his big break with a prominent White House post — and his home-state senator. His response? He hid under his desk.

Back in February, I came across this great video on Emanuel’s vice-presidential prospects.