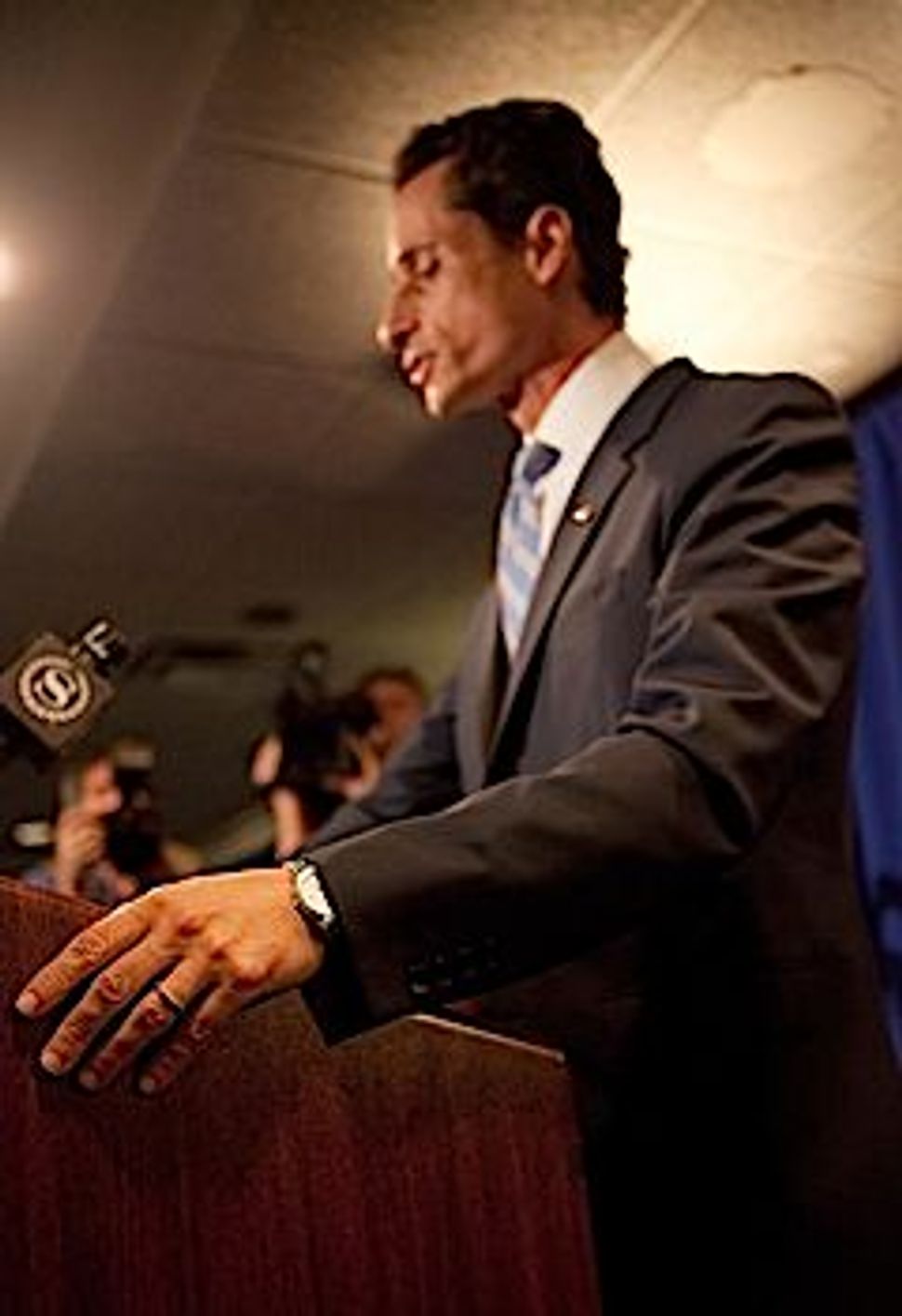 Rep. Anthony Weiner reportedly used a sexual stereotype about Jewish women in Facebook sexting with a young Jewish woman, according to this account on Radar Online. This pathetic story just keeps getting more appalling.

Weiner, a 46-year-old Jewish congressman who represents parts of Brooklyn and Queens and was considered the leading candidate in New York’s next mayoral race, admitted in a press conference Monday that lewd tweets, Facebook messages and crotch shots sent to several women who are not his wife were indeed from him. One of those women is 40-year-old Lisa Weiss, a Las Vegas blackjack dealer who is Jewish and offered to perform oral sex on him. According to Radar Online, Weiner responded, “wow a jewish girl who sucks (bleep)! this thing is ready to do damage.” The Radar report continued, “The reference to a stereotype of Jewish women’s aversion to the sex act is sure to create more heat under a scandal that is already red hot.”

At least his wife of 11 months, Huma Abedin, broke form in the spate of scandals from those of then-President Bill Clinton to Eliot Spitzer and Dominique Strauss-Kahn and didn’t stand up next to Weiner at his press conference clad in a good suit, a statement necklace and a stalwart expression.

Perhaps it’s generational. Abedin, who is an aide to Secretary of State Hillary Clinton, was born in 1976, a generation after the wives of the men listed above. I don’t know what her mother, who works as a professor in Saudi Arabia, or Abedin’s experience has taught her, but I know for sure that I am and will be teaching my own daughters to handle the sexual harassment that seems almost inevitably to come with being a young woman differently than I was.

When I was 18, flying to Israel the first time ever, and on my own, to join a kibbutz ulpan for a gap year before such a term was used in this country, the man sitting next to me groped me, repeatedly, putting his hand under the blanket that covered me while I tried to sleep during the long flight.

It never occurred to me to say anything, to him or to a stewardess. I didn’t know how to say, “stop it” or to bring attention to the fact that he was touching me. I simply didn’t possess the sense of agency needed. No one ever talked to me about such possibilities, when I was a girl in the 1970s and early 1980s, even before setting out on a solo year-long journey. Nor was it part of the cultural conversation. Without a doubt powerful men were sexually inappropriate with dis-empowered women through those years; it just wasn’t all over the newspapers and television news.

Things are different now, thanks to the work of feminists in that era, who succeeded in shifting the way we look at such incidents, and the way we see ourselves as women who have a right not to be subjected to such abuses.

Awhile, back a friend was fretting about the sexual attention her lovely teenage daughter was getting. Talking about how the girl was responding, and how my friend could discuss it with her, I realized how much things have changed. Today we raise our daughters to have a sense of personal agency. To be able to advocate for themselves. To be able to say “this is wrong.” To have a voice.

Of course, being the wife of a prominent man who has a newly public sex-related problem after decades of marriage is different than having been wed to him for only a short time. But still, there seems to be a shift in the way younger women handle these things. It is summed up by the brave hotel housekeeper who reported Dominique Strauss-Kahn’s alleged rape. And by Anthony Weiner at his press conference — without a wife at his side.