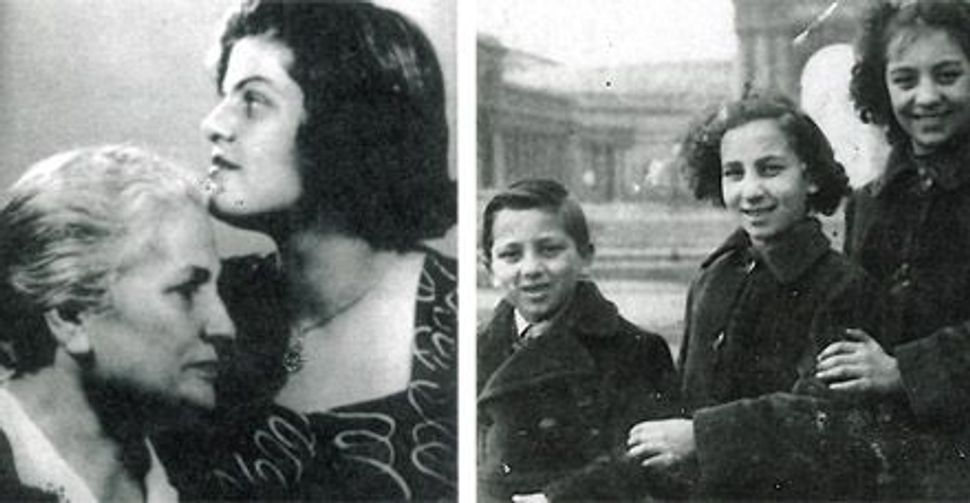 Image by Courtesy of ‘Recipes Remembered’ 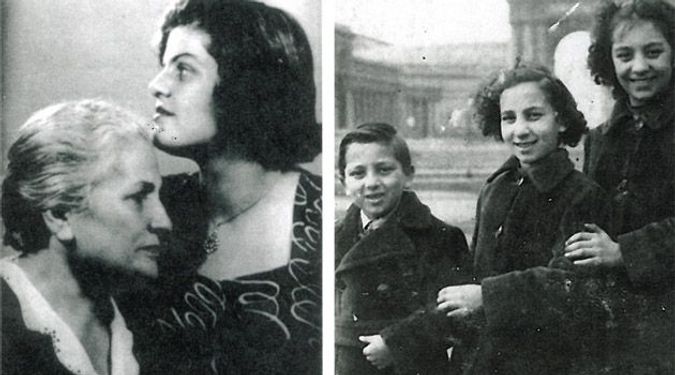 Family Memories: 1940s-era photos of contributors Cecile Rojer Jeruchim with her siblings on right, and Luna Kaufman with her mother appear on the left. Image by Courtesy of ?Recipes Remembered?

Cecile Rojer Jeruchim remembers the last meal she shared with her mother. It was a typical Belgian lunch of steak, mashed potatoes and Belgian endives. “I hated Belgian endives!” she recalls. It was 1943, she was 12.

When a non-Jewish friend stopped by during the lunch and offered Cecile the opportunity to accompany her to voice lessons, Cecile jumped at the chance. “Not before you finish your endives, or I will save them for you for dinner,” her mother said. Choosing to put off the disliked dish for later, Cecile left with her friend. While she was gone, her parents were arrested and sent to Auschwitz, where they ultimately perished. Cecile and her sister, Anny, survived the war by hiding in a Catholic convent.

“Today I often eat Belgian endives, as their subtle flavor brings me closer to my mother…,” she writes in “Recipes Remembered: A Celebration of Survival,” a new cookbook written and assembled by June Feiss Hersh in association with the Museum of Jewish Heritage — A Living Memorial to the Holocaust.

It may seem strange or even perverse to link food and recipes with stories of the Holocaust, a time when there was such death, hunger and deprivation. But the women caught in these horrors often discussed food, reciting and recording recipes. The experience of starvation in camps and ghettos fortified these culinary memories, and the discussions took on profound meaning as psychological sustenance and as a connection to a Jewish, and even human, identity.

This book, the third published in the United States to link recipes to stories of the Holocaust, represents an important evolution in the genre. While the first two books preserve the recipes of survivors and those who perished exactly as they were written by the original cooks, “Recipes Remembered” is the first to provide readers with tested (and, if necessary, slightly altered) recipes that can easily be re-created at home, allowing the tastes of these dishes to serve as reminders of the lives of the women and men who created them.

The tome comprises a collection of about 80 survivors’ stories and their personal or family recipes. Jeruchim’s entry includes a recipe for Belgian endives along with two others. The stories, which are organized by geographical regions across Europe, are often both remarkable and heartbreaking, ranging from recollections of members of the Bielski partisans in Poland to recipes representing the refined Jewish cuisines of France and Germany. Collectively, the stories and recipes help the reader peer into the kitchen of a generation of European Jews and remember their tales through the dishes that sustained them.

The clearest example of recipes acting as psychological sustenance is seen in the first, and arguably most powerful, book of this genre, “In Memory’s Kitchen: A Legacy From the Women of Terezin,” originally published in 1996. A Holocaust artifact, it is a collection of recipes written on scraps of paper by women in the Czechoslovakian camp Theresienstadt, exactly as they were first composed.

Cara de Silva, editor of “In Memory’s Kitchen,” explains in the introduction, “People who were… starving not only reminisced about favorite foods but also had discussions, even arguments, about the correct way to prepare dishes they might never be able to eat again.”

As Michael Berenbaum, a Holocaust scholar and Jewish studies professor at the American Jewish University, puts it, discussing food “brought them back to a place where they had food, family, a table, children. It was an important psychological act of resistance.”

In 2007, Joanne Caras compiled and self-published the “Holocaust Survivor Cookbook: Collected From Around the World.” The book contains the stories and recipes of 129 survivors, but doesn’t connect the two well. It encourages readers to prepare the recipes and share the stories of the survivors with their families. The recipes, though, are true to the way Caras received them — sometimes calling for a bissel of salt, or missing a step in the instructions. She decided to maintain their integrity as artifacts, even though it sometimes makes the dishes difficult to re-create.

Each book reveals the power of food to recall history, both personal and collective, and the importance that food plays in sustaining traditions, even, and perhaps especially, during tragedy. “One of the things that kept me going during the war were memories of my family, and so many of those revolved around family gatherings and food,” explains Florence Tabrys in her entry in “Recipes Remembered.” Another contributor, Judita Hruza, recalls grenadier march — a dish of potatoes, pasta and fried onions fed to her by a cook of a household she was ordered to clean. “Although this is a dish I associate with a terrible part of my life, I continued to make it after the war, because I have such a strong memory of enjoying it that day,” she writes.

Many of the book’s entries are propelled by a feeling of kinship with family that didn’t survive. “If you make the same things your mother made, you feel less alone,” Reni Hanau writes in her entry. As Hersh explains, “Food is a connection to their parents.”

These recipes, however, are more than artifacts. They were written down to be carried forward. “It’s both helping the women who contributed [to the book] show the food that sustained them… and that now has carried their memories and traditions into the future,” says de Silva. With tested recipes, these dishes can easily be prepared at home and can even “inspire us to create our own traditions,” says de Silva.

While not all the stories in “Recipes Remembered” are directly tied to food, Hersh strives to make the link between survivor and recipe clear and relevant by introducing each dish. When only a memory of a food could be recalled, or when a survivor did not cook, Hersh asked professional chefs like Daniel Boulud or food writers like Joan Nathan to contribute a recipe in the same spirit. While this has been criticized in the food community as unnecessary or even a ploy to gain readers, it offers a means to help the next generation remember, even when a survivor cannot.

Although the chief purpose of these books is to help us remember the stories and recipes of these women and men, they also serve another, equally important, purpose: They ensure a connection to a Jewish culinary legacy far older than the recipes themselves, helping us carry forward the long and rich traditions of Jewish food.

Devra Ferst is the editor of the Forward and Hazon’s food blog, The Jew and the Carrot.

Cecile credit this very Belgian vegetable for saving her life. As a child, she felt endives were bitter, as an adult, she loves the flavor of lightly sauteed, curiously sweet endives.

To clean the endives, wipe them with a paper towel, do not rinse. Heat the butter in a medium skillet and sprinkle in the sugar, add the endives and cook, over medium heat, until brown on all sides, for several minutes. When the endives are nicely brown, stir in the beer. Cover and continue to cook over low heat for about 3-5 minutes, or until the endives are just beginning to soften, adding a touch more beer or sugar to taste.