What Sheryl Sandberg’s ‘Lean In’ Speech Left Out 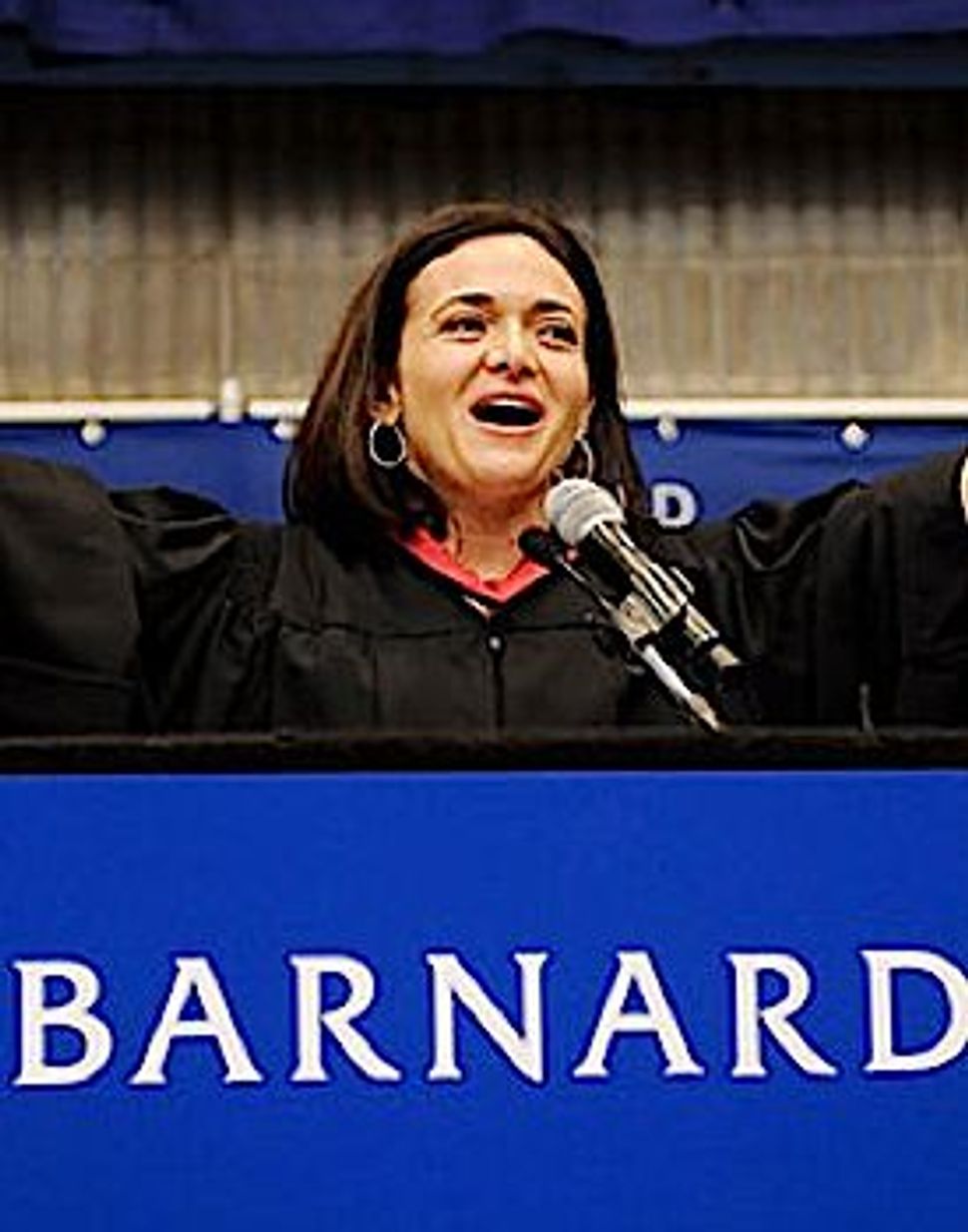 Facebook chief operating officer Sheryl Sandberg’s recent Barnard commencement address has become one of the most popular of the season. It has been linked to a quoted all over the Internet; the Forward excerpted it and so, too, did The New York Times. And right on.

Sandberg gave a no-nonsense, no apologies plea for feminine ambition. She reminded the class of 2011 that despite gains in education — she said that women have been 50% of college graduates since 1981 — men still run the world:

Of 190 heads of state, nine are women. Of all the parliaments around the world, 13% of those seats are held by women. Corporate America top jobs, 15% are women; numbers which have not moved at all in the past nine years. Nine years. Of full professors around the United States, only 24% are women.

Sandberg’s two main pieces of advice to remedy gender inequality are for women to “think big” and believe in themselves, and to not prematurely curtail our ambitions because of the work/life choices we might have to make down the line when we have children.

She expressed a similar sentiment in her “don’t leave before you leave” TED speech. Overall I agree with Sandberg and hope that that those Barnard graduates took her words to heart. But I do think she leaves out one crucial point out.

Because what I have seen most clearly in my 20 years in the workforce is this: Women almost never make one decision to leave the workforce. It doesn’t happen that way. They make small little decisions along the way that eventually lead them there. Maybe it’s the last year of med school when they say, I’ll take a slightly less interesting specialty because I’m going to want more balance one day. … If several years ago you stopped challenging yourself, you’re going to be bored. If you work for some guy who you used to sit next to, and really, he should be working for you, you’re going to feel undervalued, and you won’t come back. So, my heartfelt message to all of you is, and start thinking about this now, do not leave before you leave. Do not lean back; lean in. Put your foot on that gas pedal and keep it there until the day you have to make a decision, and then make a decision. That’s the only way, when that day comes, you’ll even have a decision to make.

The problem I have with this advice is the fact that it is hard to lean in, if you have nothing to lean into. By that I mean that even the biggest fireball of a woman — the one who is confident in her own greatness and forthright in her ambition — will at one point have to contend with the fact that if she decides to have a baby she will receive very little support.

Let’s say a woman does charge ahead full-force and lands a spot as a chief surgeon, makes partner in a top law firm, or becomes and editor at a major newspaper or magazine. What happens then if she decides to have a baby? Chances are, considering the dismal support young mothers receive from their workplaces and government and even — though it is getting better — their husbands, she will have to lean way, way back.

A study that surveyed maternity leave policies in 181 nations found that he U.S. is one of only three nations, along with Papua New Guinea and Swaziland, that don’t require paid maternity leave. For now women must rely on the good will of their employers to give them something that is required in places like Japan and Russia. As far as paternity leave — which should be on the negotiating table right next to maternity leave — well, it is practically non-existent.

And these legal and professional issues aren’t the only thing constricting young mothers. There is still an overriding cultural expectation that women will shoulder the majority of parenting responsibilities. Many women, from Tina Fey to PepsiCo. CEO Indra K. Nooyi, have complained that they are always asked about how they balance work and life while their male colleagues never field such questions. And while men have been pitching in more and more in the household, women report doing two-times as much housework, and three-times as much childcare. Even in my about-as-progressive-as-it-gets neighborhood of Park Slope, Brooklyn, my young father friends report that when they go on a walk with their baby everyone praises them for being such an amazing dad. My young mother friends report no such praise, just an occasional sense of camaraderie, or, less-frequently, judgment, from other young mothers.

So, if any Barnard graduates are reading this, I would like to add that on top of what Sandberg recommends, it is also in your best interest to get a little angry about the lack of support for working mothers and try to change things. Lobby for better maternity leave policies, support women in your workplace when they are negotiating their maternity leave policies, make sure you have a partner that is willing to fight for a decent paternity leave policy (sadly, to the tiny degree that that is possible), and if you have kids try, at least, to do only two-times the childcare. Yes, it’s still double, but less than the triple women do now.

What Sheryl Sandberg’s ‘Lean In’ Speech Left Out