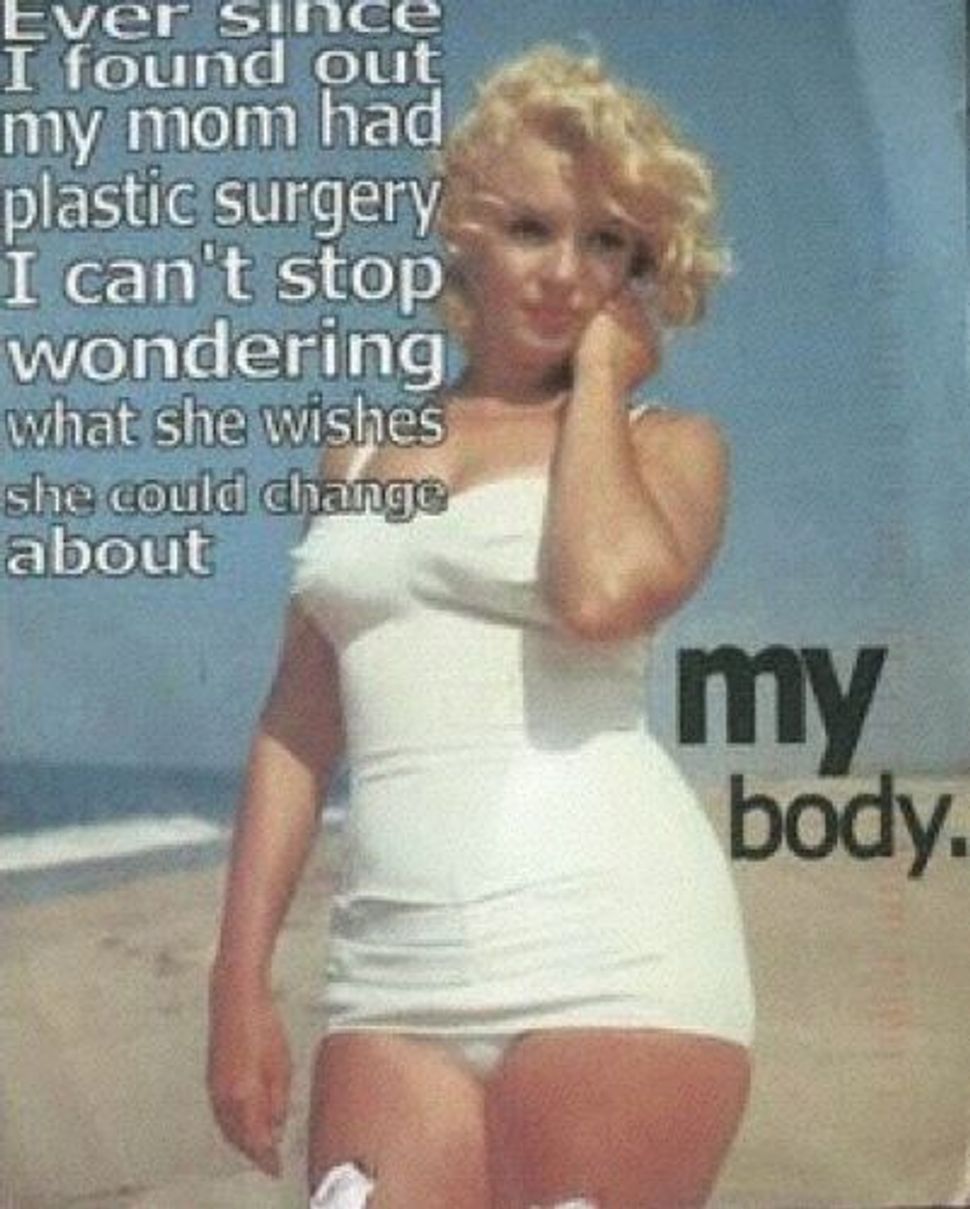 From Postsecret, an ongoing community art project, where people mail in their secrets anonymously on one side of a postcard Image by Postsecret

On Postsecret, someone recently sent in a postcard (pictured right) about mothers, daughters and body image. I think most can relate to the anonymous author of the Postsecret card. When mothers struggle with their own body image, their insecurities are often passed down to their daughters. In 2010, Peggy Orenstein tackled the difficult issue of food, weight and motherhood in The New York Times magazine. This is a universal issue, affecting a variety of ethnic groups and socio-economic classes.

But there is a distinctly Jewish element to the mother-daughter-body image issue. Jewish mothers, traditionally, (and stereotypically) aren’t shy about their own issues, or the issues they see for their daughters. Anonymous wondered what her mother would change about her body; a Jewish daughter would know.

It’s no secret that Jewish mothers and daughters have a particularly complicated relationship to body image and to each other. That’s what filmmaker Gayle Kirschenbaum is exploring in her film My Nose: The Bigger Version.

It would be too easy to write off Kirschenbaum’s mother as a “bad mother” or an anomaly. I think more of us can relate than would like to admit it. I don’t mean to throw my own mother (whom I love more than words can say) under the bus, but I too have experienced this phenomenon.

To this day, my mother remains the harshest critic of my appearance, but it’s complicated. On the one hand, it’s comforting to know there’s someone who will give me an honest review of my new haircut or tell me when an outfit isn’t flattering. (Then again, would it kill her to let it go sometimes? It’s not like I got a bad haircut on purpose!) And of course, I know that the criticism comes from a place of love, for what mother wouldn’t want her daughter’s experience in life to be a little easier thanks to the privileges afforded by beauty in our society? But where is the line?

What about you? Can you relate to the Postsecret card or Gayle Kirschenbaum’s story? Share your story in the comments and visit My Nose: The Bigger Version. for more information on the film.