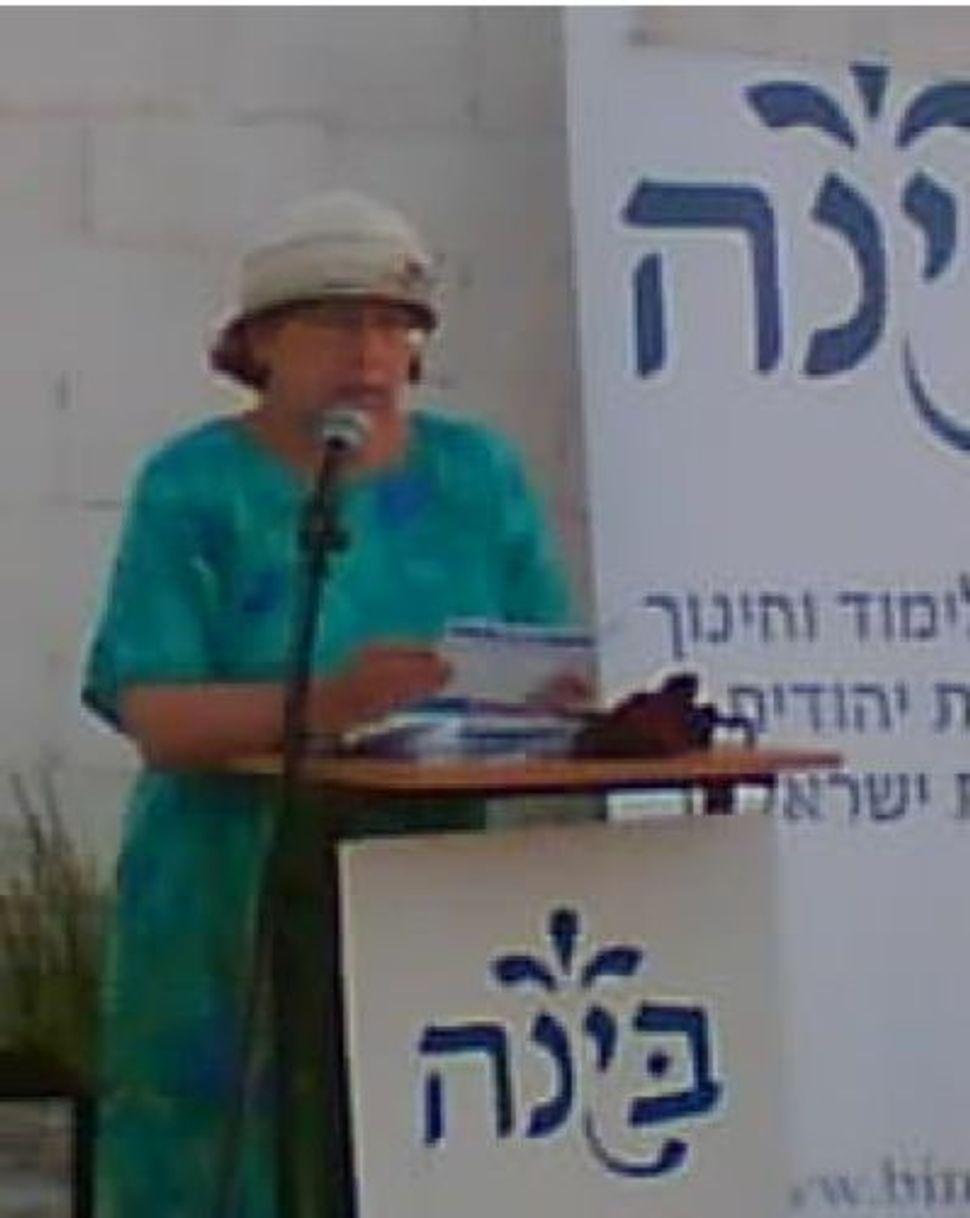 Leah Shakdiel protesting against the privatization of Israeli prisons in 2007. Image by Courtesy Leah Shakdiel

Leah Shakdiel is a modern Orthodox Jew, feminist and peace activist who first became widely known in 1988, when she won an Israel Supreme Court case that allowed her to become the first woman to be allowed to sit on a local religious council. Those councils supervise and dole out funding to local synagogues, cemeteries, kosher slaughterhouses and mikvahs.

Now Shakdiel, 60, has become a leader of the social protest movements that took place in Israel this summer, and is chairing the “Vision Committee” charged with creating a policy paper charting the future course of the protests and the changes those involved hope to effect.

“Summer is over, the weather is less inviting to camp out in the streets and the social protests needs to move into its next phase. We need to take the discourse indoors and translate it from spontaneous direct democracy models in the streets to more organized public debates in various halls, hold public hearings, that sort of thing,” she told The Sisterhood in an interview while she was in the U.S. speaking to progressive Jewish groups about the effort.

She came to the U.S. for a conference to mark 9/11 in connection with a forthcoming book, Abraham’s Children: Liberty and Tolerance in an Age of Religious Conflict, which is slated for publication by Yale University Press in April 2012. She also spoke to J Street U groups at Columbia, Yale and Harvard Universities, and to adults invited by Partners for Progressive Israel.

The spirit of this past summer’s protests “must be maintained, to stop the growing inequality, to go back to the welfare state, the social democracy, to a safety net of the basic needs of all citizens by the government,” Shakdiel told The Sisterhood. “Israel was actually a very successful welfare state until about 30 years ago, when it started copying America.”

Shakdiel, who teaches at Sapir College in Sderot, Israel, and in several pre-military programs, said that feminism has infused the entire protest movement and will continue to:

It’s not as if feminism is mentioned as such, but women’s needs in all these areas were carefully looked at. The Vision paper talks a lot about the switch from formal democracy to participatory democracy. It’s the ethic of care. This is certainly a feminist perspective. It’s the input of feminist theory.

She is concerned, however, that female influence may recede as the movement transforms into a more establishment effort:

Whenever you step away from formal politics into grassroots organizing, civil society organizations, you always find the bigger amount of work is done by women and the women’s voice and perspective are at the forefront. As things get more formal the men take over and the male voice takes over. This is no exception.

But she is optimistic about the prognosis for long-term change because, in Israel at least, “women’s issues” are not quite as segregated from the culture at large as they are in the U.S.:

There is research that women’s issues in Israel unlike other schisms in Israel, don’t stand out. Gender is not an important category in Israel. Others, like nationality, are.

It goes well with my type of feminism. I really think women’s issues are connected to the bigger issues, which is why this summer made me optimistic. There is a refusal to use the word sector. Instead they use the word community. There is more understanding on the part of the young that we are interdependent and that there’s no such thing as justice for one group only.

This invigorated approach to the issues of society at large will eventually have a tremendous effect on both the Palestinian issue and women’s issues, indirectly. That’s why I never thought it was enough to work on women’s issues alone.