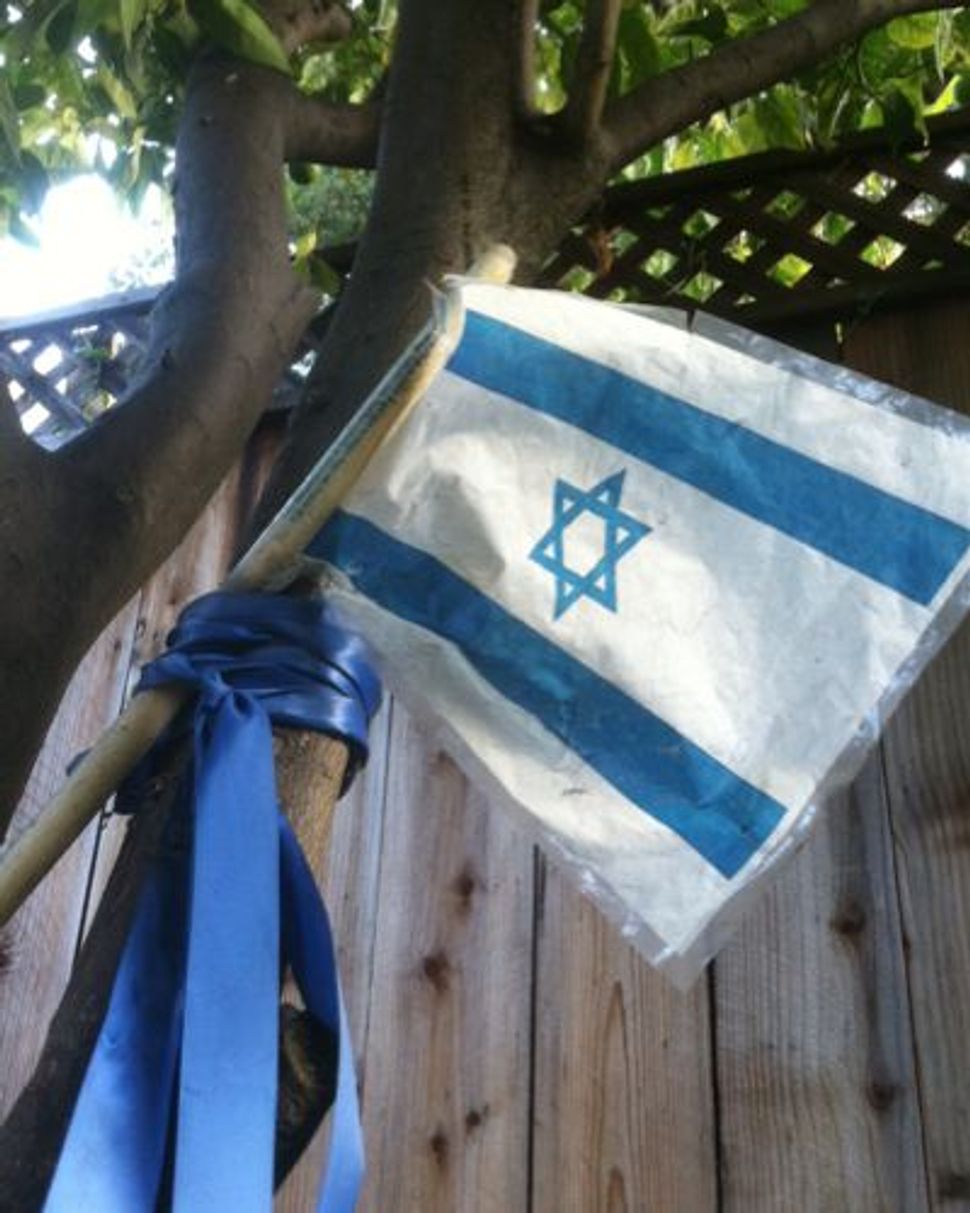 The flag honoring Gilad Shalit that hung in the author?s yard. Image by Joel Zand

On Tuesday we lowered the flag. To be exact, we completely removed it with the prayer that it will never need to be raised again.

I am speaking of the foam and plastic Israeli flag that has been tied by a blue ribbon to a tree in our yard since Gilad Shalit was abducted by Hamas on June 25, 2006. We vowed not to remove it until Shalit was safely at home in the loving embrace of his family. My husband has had a Gilad Shalit sticker on his car all this time, and my boys have worn Gilad Shalit dog tags, bracelets and t-shirts off and on over these long five years and four months, but that flag has been the most enduring symbol of our solidarity with the kidnapped soldier and all those who have worked to free him.

The flag, one of hundreds I had ordered for Yom Ha’atzmaut celebrations at the school I used to run in New York, moved with us to California, and then from one house to another. We carefully removed it from a tree at our first house, and carried it by hand to our new one. We chose to affix it to an orange tree in our new yard. Ours are not Jaffa oranges, but they are close enough.

We were tempted to take the flag down last week, when the prisoner exchange deal was announced, but decided that the correct thing to do was to wait until it was confirmed that Shalit was actually home. Given the time difference with Israel, we probably took it down just as he was crossing the threshold of his family’s home in Mitzpe Hila today.

As I stayed up all night watching coverage of events on streaming Israeli television, I eagerly anticipated what we would be able to do in the morning. My youngest son, then 9 years old, was with me at the Shalit protest tent [set up by his parents near the prime minister’s residence in Jerusalem] this past summer and he talks a lot about it. He also wears his Shalit shirt and explained all about Shalit to his teacher. While my older sons have expressed their solidarity with Shalit on Facebook with friends, for our youngest these physical symbols have been most important.

As he was running off to school after we took the flag down this morning (he was the one who actually untied it), he made me promise that we won’t ever throw it out, even though it is dirty and not in good shape. It clearly has real value and meaning to him.

I won’t say that it was easy watching Palestinians waving other flags – green Hamas ones – as they joyously welcomed the first of the 1,027 Palestinian terrorist prisoners home to Gaza and the West Bank. I, like so many Israelis and Jews worldwide, feel highly conflicted about the price that Israel has paid for Shalit’s freedom.

But I am moved to tears knowing that I belong to a people that so values one individual’s life – a life represented at our home by a single Israeli flag that we lowered as so many others were raised this day in celebration.