Gilad Shalit’s Vulnerability, and Ours 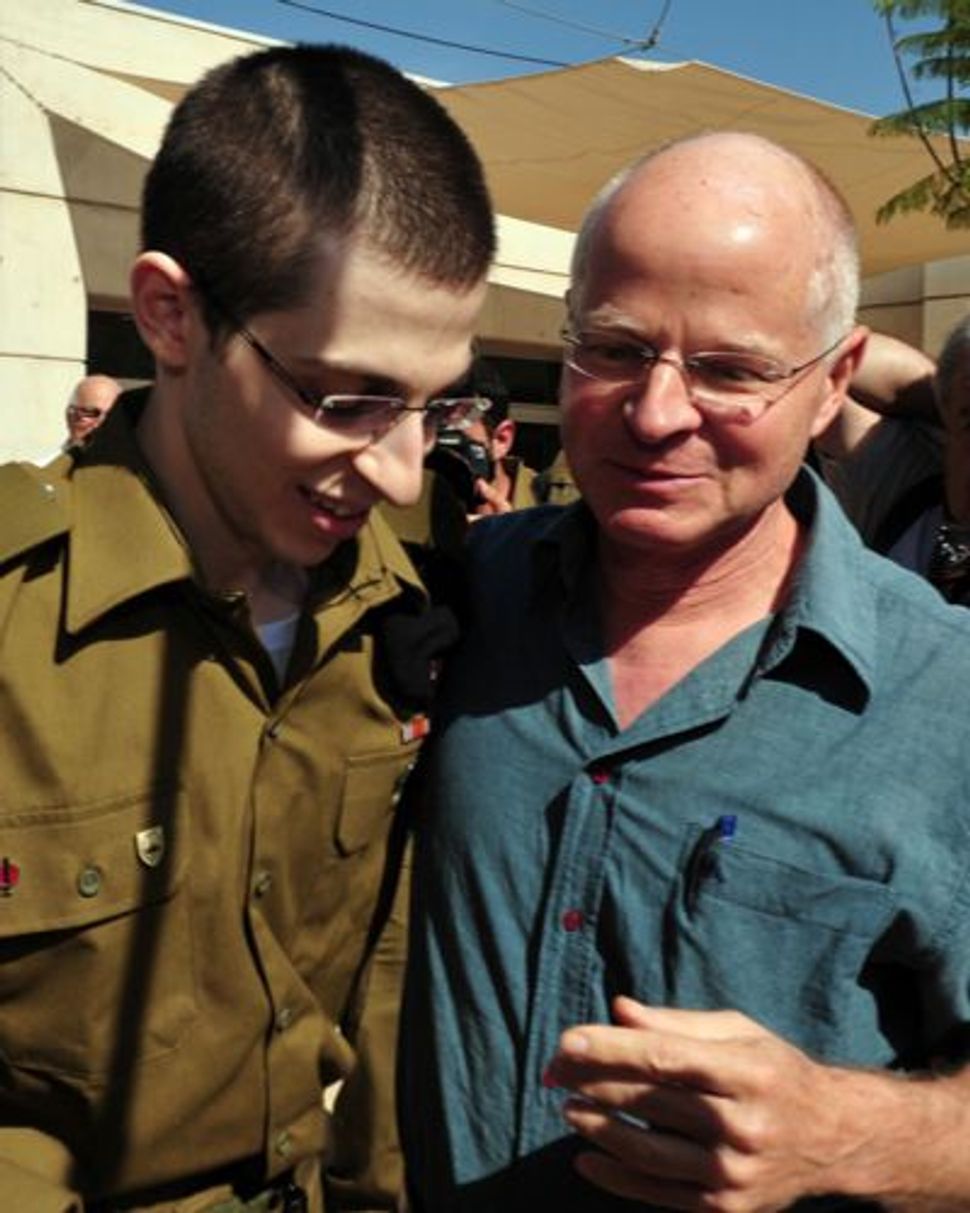 Gilad and Noam Shalit the day of Gilad?s release. Image by Getty Images

If Israel could choose a single day to live over and over again, then Tuesday, October 18, 2011 would be a leading contender. The days preceding Gilad Shalit’s homecoming were full of stress, worry and controversy regarding the price the country would have to pay for his return, the release of more than one thousand Palestinian prisoners. Future days will, in all likelihood, be full of the same.

But the day of Gilad’s release was an oasis of unadulterated celebration and joy. It felt like a spontaneous national holiday. All over the country, people dubbed it “Gilad Day” “Chag Gilad” and “Gilad Fest.” It was certainly the happiest day in recent memory.

The entire nation focused on one pale, painfully thin young man, deprived of light, love and care for so many years, stepping out into the sunshine, embracing his father, saluting the Prime Minister and the IDF chief of staff, and finally returning to the warmth of his family, and his first home-cooked meal (reportedly pasta, prepared by his mother Aviva).

Like many families in Israel, the news of the Gilad Shalit deal caught mine on our Sukkot vacation. On Tuesday, instead of heading out to enjoy Eilat’s beaches, we found ourselves glued to the television much of the day. When I did leave the hotel room, I checked my iPhone every ten minutes for updates, and most importantly, for the pictures.

As for many mothers in Israel, the first sight of Gilad appearing relatively healthy and whole, walking under his own steam, brought instant tears of relief. Watching him finesse the questions of the Egyptian journalist in the awkward interview he was forced to give made me feel proud. As I watched him hours later putting his hand on his heart as his car passed the cheering crowds of people waving Israeli flags, and then finally walking to his house, the tears erupted once more.

We Israelis are so used to being strong in times of adversity, so adept at steeling ourselves for bad news, so tragically experienced at mourning, that we almost don’t know how to cope with a happy ending. In real life and online friends of mine kept calling the images “unreal” and “like a dream” or “something out of a movie, not real life.” Normally calm, hardened and somewhat cynical, Israeli news reporters had trouble controlling the emotion in their voice as they covered the events of the day.

One of them, prominent Channel 2 anchorwoman Yonit Levy had all of her journalist guests leave her wedding the night that the Shalit deal was announced, and cancelled her honeymoon in order to be at her anchor desk on his homecoming day.

“Gilad Fest” may seem excessive and overblown, perhaps even incomprehensible to those who don’t live in a country with universal military service. But when the overwhelming majority of families send their sons and daughters to serve in uniform, there is an understanding that it was simply a matter of chance or fate that it was Aviva Shalit’s son, and not theirs, who sat in Hamas captivity for five years.

That understanding results in a sense of identification and vulnerability that is truly difficult to understand when you come from a country with an all-volunteer army. I never really understood it until my children began (gulp) approaching army age themselves.

Emotionally, Gilad was not only the Shalits’ son, he was the nation’s son. The whole country felt the joy and relief of his homecoming as sharply and deeply as they had felt the pain of his captivity for the past five years.

There is no other way to understand the deal that was struck for his release other than in this context. Otherwise it makes no sense to trade 1,027 prisoners, some of whom were terrorists together responsible for hundreds of Israeli deaths, for the life of a single soldier.

But logic doesn’t really ever come into play when we are talking about our children, does it? And when it came down to it, as idealogically opposed as Prime Minister Binyamin Netanyahu may be to prisoner swaps involving murderous terrorists, he, like every other Israeli parent, had to ask himself whether he could have missed the opportunity to bring a soldier home safely if the soldier in question was his own son.

In the fact of Gilad’s release, we have his answer.

Gilad Shalit’s Vulnerability, and Ours