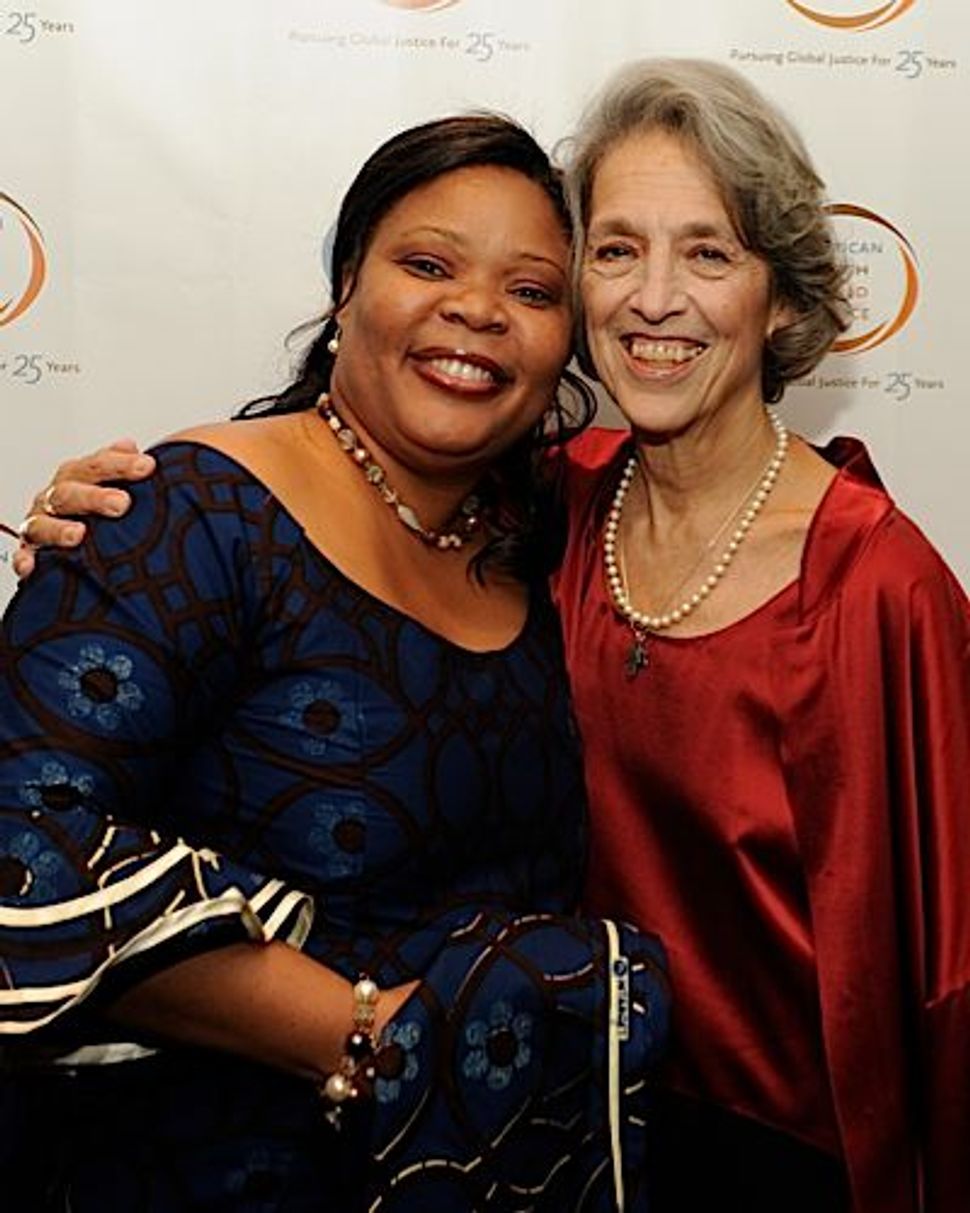 When the announcement was made that the 2011 Nobel Peace Prize would be given to three women, including Leymah Gbowee (pronounced LAY-muh BO-wee), some Jews were particularly proud.

Gbowee, an extraordinary Liberian activist and founder of Women Peace and Security Network-Africa (WIPSEN), who has been influential in mobilizing women for peace and bringing democracy to Liberia, has credited the American Jewish World Service (AJWS) with being one of the first organizations to believe in and to provide financial support for her work.

“AJWS is a name I will remember”, she said recently at an AJWS event. “It is an organization with a heart and a soul. I mean it – and I don’t take my words lightly.”

Ruth Messinger, AJWS’s president and CEO, says she first met Gbowee in 2003 at a breakfast in Ethiopia.

“She told us about her work training women to take control over their futures, “ Messinger told The Sisterhood, “and when she proposed copying her model in other parts of Africa, we decided to support her. We want her to spread her work.”

Gbowee’s work is indeed remarkable. The 39-year-old mother of six had not planned a career in peace-making and women’s empowerment. But the 14 year civil war in Liberia under the ruthless dictator Charles Taylor that had taken 200,000 lives by 2002 took a particularly tragic toll on women — gang rapes became part of everyday life, and warlords would rampage villages to forcibly “recruit” male children as soldiers. It propelled her to action. Gbowee writes in her memoir, “Mighty be Our Powers,” that after having a vivid dream telling her to gather the women, she went to her church and indeed rallied up the women, most of whom were poor farmers, fishmongers and peddlers.

These market women had few resources other than their vast numbers and their bodies. The women, dressed in a “uniform” of simple white scarves and t-shirts, took to the streets to cajole the warring men to give up their fight. They linked arms outside a boardroom where peace negotiations were stalled and threatened to strip naked if the war wasn’t ended (in Africa it’s considered a terrible curse to see a married or elderly woman naked). Gbowee’s “troops,” as the warring generals dubbed her, also used one other tool: the sex strike. In an echo of Aristophanes’ classic Greek drama “Lysistrata,” they withheld sex until the men put down their guns. The women’s motto was: no peace, no sex.

The struggle was ultimately successful. Not only was their work influential in bringing an end to the war end in 2003, but Gbowee then also mobilized the women to vote, helping bring the democratic process to Liberia. This led to the 2005 election of Ellen Johnson Sirleaf as president of Liberia. She is the first and only elected female head of state in Africa, and one of Gbowee’s co-Nobel Peace Prize laureates. Gbowee has also created interfaith women’s peace groups and has given countless women a language for building peace in their communities.

“Many struggles for social change around the world are being led by women on behalf of women,” Messinger said. “There are now powerful efforts around the world to ensure that people affected by war and poverty have a voice at the table. It is vital to have all points of view represented in order to resolve conflict.”

Getting women’s voices to be heard, however, is not always easy. Gini Reticker, who along with philanthropist and filmmaker Abigail Disney helped tell Gbowee’s story in their film “Pray the Devil Back to Hell,” has said that the media ignored Gbowee for many years. “It was very hard to find footage of the work that the women had done,” she said in a recent interview. “There were journalists who told us, ‘Oh, we saw those women, but they were so pathetic-looking that we didn’t bother to cover their story.” The filmmakers eventually found one person with extensive footage. He had been Charles Taylor’s official photographer until 2005, and kept his archives. Had it not been for that one photographer, Gbowee’s story may have been lost. The film, which is now part of a PBS series on women and war currently being aired, is very powerful. The film, coupled with the women’s Nobel Peace Prize, has had the impact of ensuring that the work of women peacemakers in Africa is finally being noticed.

There are some important messages for the Jewish community as well. “The work of expanding the human rights of marginalized people around the world is motivated by Jewish values,” Messinger said. “Part of our mission is to mobilize the Jewish community to be aware of its global responsibilities. From our own struggles against slavery and injustice, we are obligated to be concerned about the work of others in the pursuit of justice. I believe that it’s incumbent upon us to pursue and join that effort. Like Hillel said, if I am only for myself, what am I?”