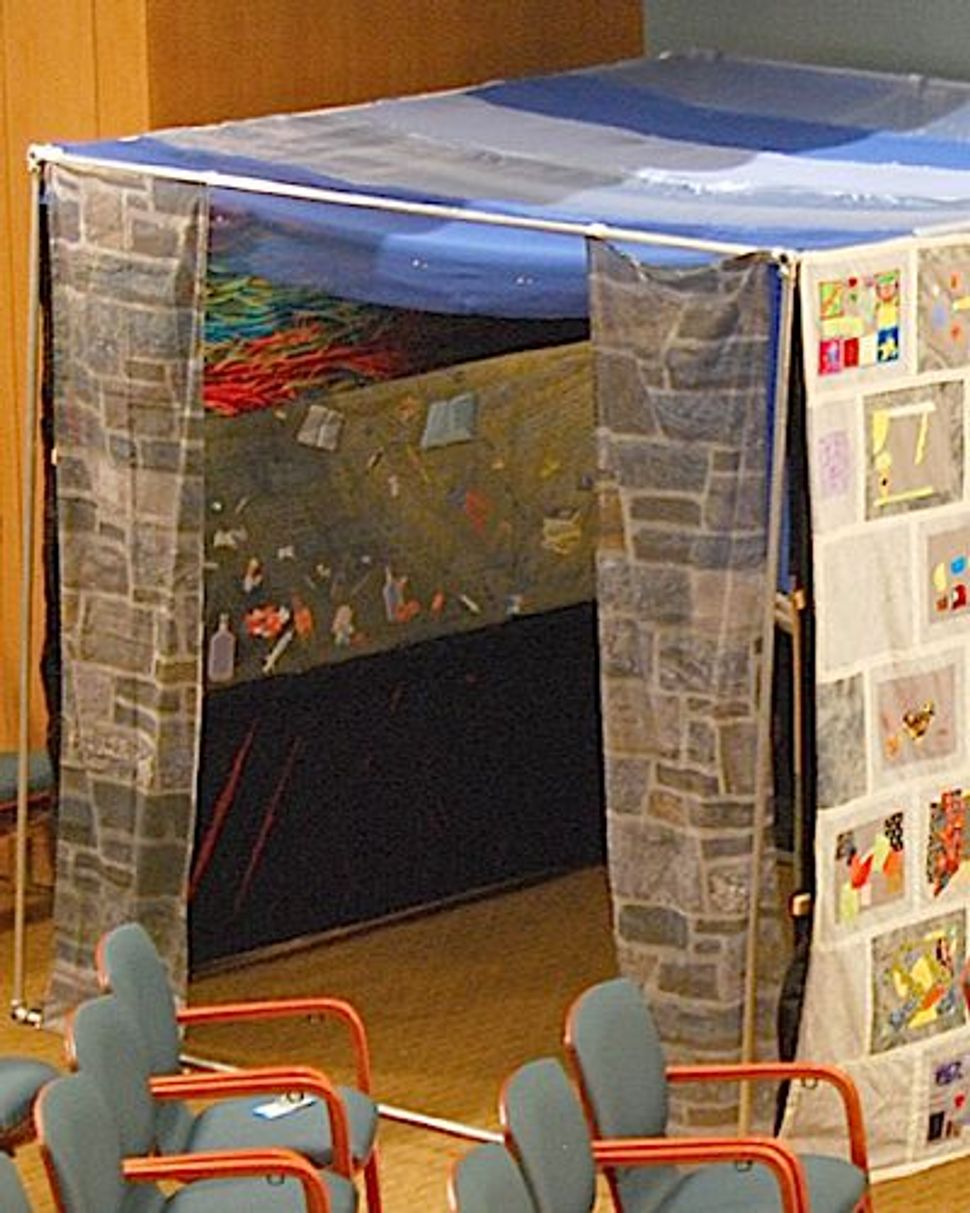 A sukkah crafted from the stories of the homeless. Image by courtesy Heather Stoltz

Heather Stoltz discovered quilting and fiber art in an unconventional way. Then again, approaching things unconventionally isn’t anything new for her. With a degree in mechanical engineering in hand, she went on to pursue a Master’s Degree in Jewish Women’s Studies at the Jewish Theological Seminary.

We met soon after that, as Arts Fellows at Drisha, a center for women’s Torah study in Manhattan. Since that time she’s been integrating her love of Jewish texts and values with her art. She now has a compelling new art/social justice project that will be on view at synagogues and churches in the coming months.

The project is called “Temporary Shelter” and was born out of her interactions with homeless people.

The exhibit’s journey starts at the Stephen Wise Free Synagogue in Manhattan, with a concert and presentation on Monday, November 7th.

Debra Nussbaum Cohen: What inspired you to begin this particular work?

Heather Stoltz: While working as the community service coordinator for the Stephen Wise Free Synagogue, I spent a lot of time with their men’s shelter. It was there that I learned about the faith-based Emergency Shelter Network, a network of approximately 100 churches and synagogues in New York City that house volunteer-run homeless shelters. Working with and learning from these incredible lay leaders and spending time with the guests at the SWFS shelter inspired me to tell their stories in the only way I know how – through my art.

My work is also inspired by Jewish texts and there are two quotes that guided this piece. Sefer Hasidim teaches us that “If a community lacks a place of worship and a shelter for the poor, it is first obligated to build a shelter for the poor.” And in Vayikra Rabbah 34:1, we learn that “Rabbi Yonah said: The verse does not say ‘Happy is the one who gives to a poor person’ rather, it says: ‘Happy is the one who considers a poor person’ (Psalms 41:2). Therefore, you must consider how best to benefit such a person.”

To create an art piece that embodies these texts, I decided to create a free-standing structure reminiscent of a sukkah, a temporary hut constructed for use during the week-long Jewish festival of Sukkot. The structure of the “stones” that make up the outside walls may make one think from a distance that this is a shelter for the poor, but a closer inspection reveals its temporary nature with fabric walls and a sheer roof.

The walls of this shelter are made from the stories of homeless individuals, forcing the viewer to confront their stories and truly consider them as Rabbi Yonah instructs. By hanging these stories on the walls of the sukkah, the ushpizin (exalted guests) invited into the space are the homeless men, women, and children of our city instead of the traditional Biblical ancestors.

Why have you focused on the homeless?

In speaking with the men at the SWFS shelter and hearing stories about the guests at other faith-based shelters, I was struck by the wide spectrum of life situations that leave people without a home. On my daily walk to and from work, I started to wonder about the homeless people I passed on the street. What were their stories?

I also became more aware of my own reaction to the homeless people I passed as well as the reactions of others. Too often, we’re simply blind to the plight of those around us. It is my hope that in seeing the individual stories of a variety of homeless individuals, it will open people’s eyes to those who call a shelter “home” and encourage them to learn more about getting involved in helping our city’s homeless through volunteering with a shelter, advocacy work, or simply by paying more attention to the people they pass on the streets every day.

How did you meet the people whose stories you share?

I started my interviews at the SWFS shelter where I already had a relationship with the coordinators as well as some of the shelter guests. From there, I traveled to two other NYC faith-based shelters: The Church of the Holy Trinity and B’nai Jeshurun. Not all of the shelter guests wanted to share their stories with me, but those who did were completely open and I was humbled by their trust in me. These interviews became the source for the inside panels of Temporary Shelter. Each of the nine fiber art pieces represents one person’s story.

In order to create the outside walls, the wonderful people at the Department of Homeless Services put me in touch with recreation teachers at nine family shelters in the city. In each of those shelters, I ran a workshop with the students, helping each child create a small fiber art piece that expresses his/her feelings about living in the shelter. Their stories are as varied as those of the adults and their pieces reflect the range of feelings of these young, insightful people.

What do you think we can learn from their stories? I think the most important lesson that I took away from these stories is not to make assumptions about people. Each of us has our own unique journey and it’s only through real connections that we can truly see the other person.

My hope is that those who see my piece are inspired to challenge their own assumptions about the homeless people in our city and, just maybe, take the time to reach out and help them.

In order to more fully share these stories and reach more people, I’m currently working on a book that will contain images of all the art in the piece, including that of the children, along with the stories that they tell.

How does being Jewish inform your work?

My Jewish identity is an integral part of my art and, as I mentioned earlier, I am inspired by Jewish texts and values. This piece takes a very “Jewish” form in using the structure of a sukkah yet the message is universal and each viewer will see it through his/her own world view. In speaking with The Church of St. Francis Xavier about hosting the piece, they considered using it as the crèche for Jesus during Advent.

As my husband Geoffrey Mitelman pointed out in his piece on The Huffington Post, “This Christian church would be trying to sanctify the stories of predominantly Christian homeless New Yorkers by linking their stories to Christianity’s most sacred story, the birth of their savior. But they would be doing it through a Jewish symbol made by a Jewish woman, who was making this piece because of her commitment to her Jewish values.”