A Rabbi and a Minister Respond to ‘Personhood’ 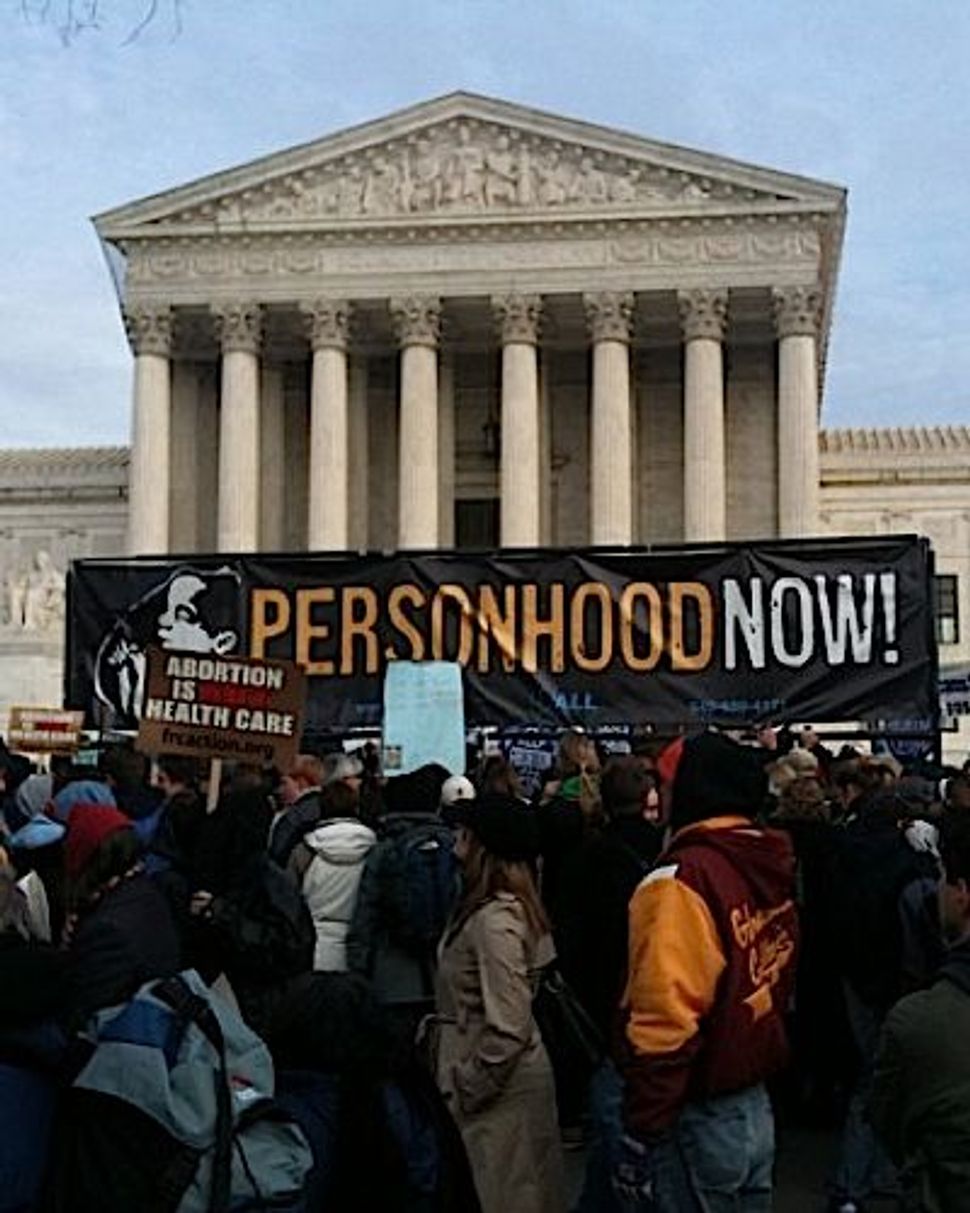 Banner in front of U.S. Supreme Court during 2010 pro-life march.

Pro-lifers are having a busy month. There is the Personhood amendment set to pass November 8th in a general election vote in Mississippi, with support from Democrats and Republicans, which would define human life as legally beginning at fertilization. This would render all abortions and morning-after pills illegal, and, according to some, could result on bans of certain birth control pills and in-vitro fertilization.

And just a few weeks ago the House of Representatives passed the “Protect Life Act” which would prohibit women from receiving coverage for abortion from any federally-funded insurance policy, and, potentially, abortions in federally-funded hospitals even if the women have a life-threatening condition.

The Personhood movement, as well as the anti-choice movement, in general, says that they are trying to comply with divine law, as opposed to civil law, and rely upon portions of the Christian and Hebrew Bibles to make that claim. But when I decided to take a look at the texts they say inspire these “divine” laws, I couldn’t find one place that unequivocally said that life begins at conception. Befuddling! And so I decided to email two smart women who know this stuff way better than I do, Rabbi Jill Jacobs, executive director of Rabbis for Human Rights–North America, and Reverend Chloe Breyer, executive director of the Interfaith Center of New York, to help clear up what exactly these portions do and don’t say about when life begins. Well, it looks like some Mississippians could use a Sunday school refresher course before they go using their divine interpretations to change our civil laws. Not that Americans are supposed to be using divine law to inspire civil laws anyway (See: Constitution).

Elissa Strauss: The argument for personhood seems to be largely based in these few lines from Genesis, which appear in a section of the bible containing laws pertaining to violence. Exodus 21:22-25 reads:

And if men struggle and strike a woman with child so that she has a miscarriage, yet there is no further injury, he shall be fined as the woman’s husband may demand of him, and he shall pay as the judges decide. But if there is any further injury, then you shall appoint as a penalty life for life, eye for eye, tooth for tooth, hand for hand, foot for foot, burn for burn, wound for wound, bruise for bruise.

How do you interpret this?

Rev. Chloe Breyer: I have only heard this passage invoked to support the rights of a woman to have an abortion. This text appears to define the fetus as something of enough value to warrant financial restitution when it is lost and yet clearly identifies the life of the fetus as having less value than that of the mother. When I was in seminary at General Theological Seminary, participating on an interfaith dialogue with other Jewish, Roman Catholic, and Russian Orthodox seminarians, I recall the rabbinic students from Jewish Theological Seminary explaining the hierarchy of value implicit in this passage came about because, in their view, Judaism teaches that “the life that is in the world, embedded within a web of relationships is of greater value than one that has not entered into human relationships.” This view is echoed in the chapter on “Judaism and Family Planning” in Daniel Maguire’s, Sacred Choices: The Right to Contraception and Abortion in Ten World Religions (Minneapolis: Fortress Press, 2000)

Rabbi Jill Jacobs: This text offers a nuanced distinction between a fetus and a fully-formed human being. Someone who causes a woman to miscarry does pay damages. The assailant is not held responsible for murder, but is also not let off the hook entirely. This distinction acknowledges the emotional pain that this woman feels upon unwillingly losing her pregnancy. This is an important acknowledgment: even today, many women who suffer from pregnancy loss feel that their mourning goes un-affirmed. At the same time, the text explicitly refuses to hold the assailant liable for murder, as the fetus does not achieve personhood until emerging from the womb. It is also crucial here that this miscarriage happens as the result of an assault. The woman here is not choosing to abort the fetus. There is no reason to believe that she would be held responsible in any way if she did.

Elissa Strauss: Also, there are other sections of the bible that contradict the idea that personhood begins at fertilization. These include Leviticus 27:6 which says that children do not have monetary value until after one month, Numbers 3:15 which says that children younger than a month should not be accounted for in a census, and even Genesis 2:7 in which a man becomes a living being only after he has breathed. What’s your take on these texts in the context of determining when life begins?

Rabbi Jill Jacobs:The more crucial texts are the Talmud and later legal texts, which become the basis of day-to-day [Jewish] law (which the Torah does not, at least not directly). The Talmud refers to a fetus as a part of its mother’s body, and not as a full human being. Maimonides permits abortion when the woman’s life is in danger, and the Shulchan Arukh (the major code of Jewish law) concurs.

This is not to say that a fetus is considered to be nothing at all. Jewish legal discussions do see the fetus as a potential life, and therefore do not treat miscarriage or abortion as simply removing an unwanted body part—akin, for example to having a mole removed. Instead, these texts try to negotiate the delicate distinctions among something with no person-ness whatsoever (like a mole), a potential life, and a fully-formed human being (the pregnant woman). It is clear that the woman’s life always comes first. But our texts also acknowledge that the decision to have an abortion (or the experience of miscarriage) is an emotionally and morally murky area. For this reason, we have many rabbinic teshuvot (legal responses) dealing with individual cases of potential abortion. The rabbis understood that overarching laws and statements will necessarily fail to respond to each individual case.

Rev. Chloe Breyer: You have to scour the Bible for textual references on the question of when life begins. In addition to the above selections, add Psalm 139 (“For it was you who formed my inward parts; you knit me together in my mother’s womb”) and Luke 1:39-44 (When the pregnant Mary visits her cousin Elizabeth who is carrying John the Baptist, the text says “When Elizabeth heard Mary’s greeting, the baby leaped in her womb, and Elizabeth was filled with the Holy Spirit.”). However, when you come across texts like Exodus 21:22-25, you also have to ask what makes this passage more authoritative than, say the one just a few lines earlier that says “Whosoever curses their mother or father shall be put to death”? The point is that we read these biblical passages with thousands of years of tradition — social, cultural, and religious — informing how we read them.

So, for example, looking at the Christian Church and tradition, St. Augustine wrote about the question of “personhood” in the 4th Century. Augustine ascribed to the idea of delayed “ensoulment;” Not until 40 days after conception for boys and 80 days after conception for girls did the fetus receive a human soul. The current Roman Catholic position was influenced by Vatican 1 in the 19th century when Pope Pius IX declared both the doctrine of papal infallibility, elevated the stature of Mary and the doctrine of immaculate conception, and decreed that all abortion was homicide since even if the fetus was not ensouled, it was “directed to the forming of a man.”

In contrast, the Episcopal Church, The United Methodists, the Presbyterian Church USA, and the American Baptists view things differently. While in 1988, the General Convention of the Episcopal Church stated, “All human life is sacred. Hence it is sacred from its inception until death,” a later 1994 General Convention expressed “unequivocal opposition to any … action … that [would] abridge the right of a woman to reach an informed decision about the termination of her pregnancy, or that would limit the access of a woman to a safe means of acting upon her decision.”

A Rabbi and a Minister Respond to ‘Personhood’