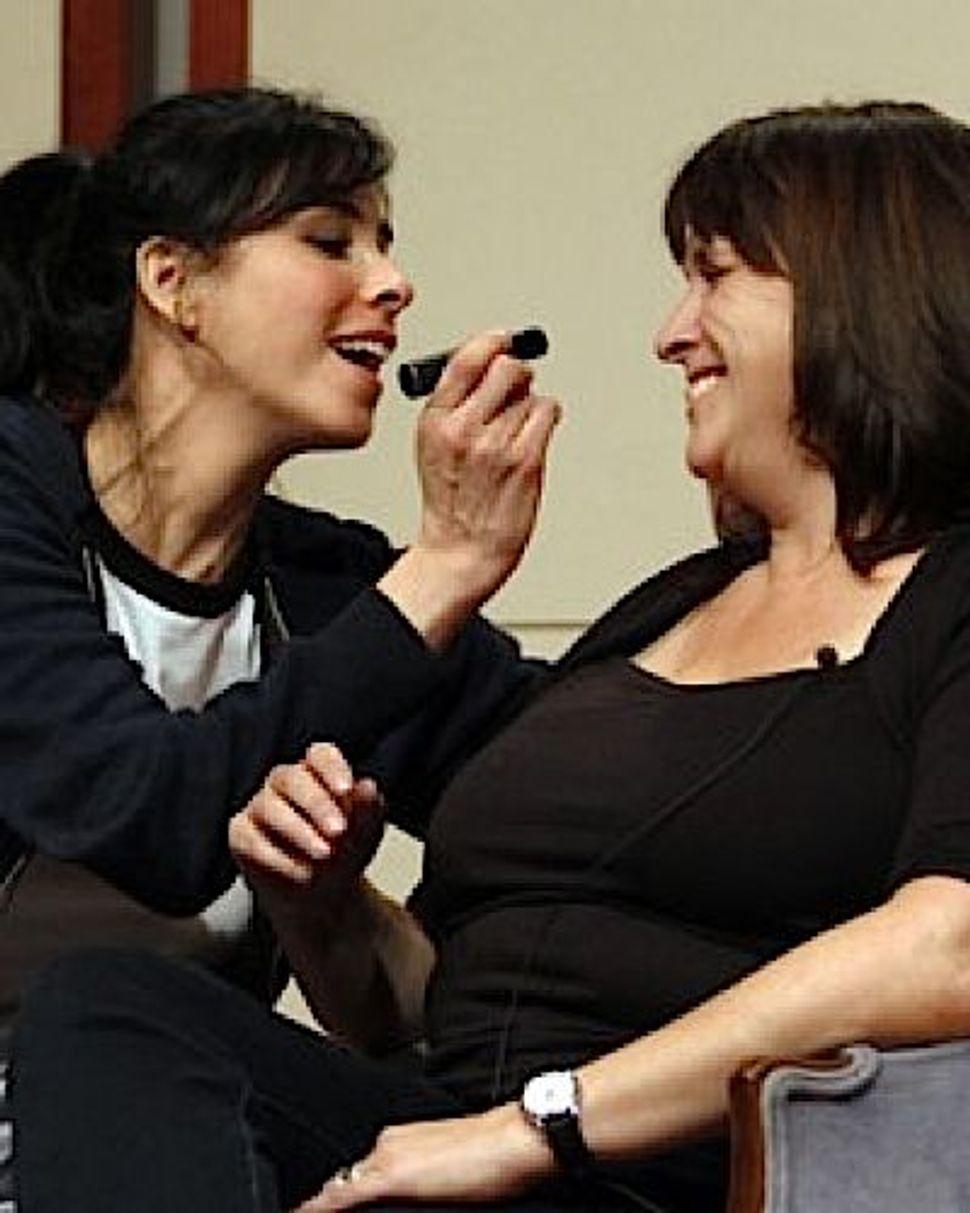 Once upon a time there were two Jewish sisters. One grew up to be a Reform rabbi and the other one of America’s more profane comics. These two sisters — Rabbi Susan Silverman and Sarah Silverman — could not be both more different and more alike. The sacred and profane mingle in their DNA, which led, in a recent joint appearance, to them exploring their genetic predisposition for “Jewiness.” Sarah says she’s “Jewy beyond my control,” while Susan says she is “attracted to the glamour of Jewiness.”

And so it went for over an hour on November 8 when the two women appeared together at Boston University’s Center for Cultural Judaism and Department of Religion. The duo’s appearance was officially billed as “Sister Act: Growing up Jewish in New Hampshire and Making the Best of It.”

The Silvermans grew up in Manchester, where they claimed they were more in the minority as Democrats than as Jews. But as children, they fended off their fair share of anti-Semitic bullies. They recalled being accused of deicide with insults hurled at them at school. Sarah said that she’d tell kids, “If I killed your God, think about what I could do to you.”

The two sisters may have left New Hampshire for good over twenty years ago, but the sense of otherness they felt during their childhood and young adulthood continues to inform their Jewish identities. Susan remembers her first days at Boston University, wide-eyed that “there were all these Jews. I felt something similar to what people say about going to Israel for the first time.”

In college she met her future husband, Yosef Abramowitz, a fellow activist and committed Jew, but her Jewish life began in earnest when she applied to rabbinical school without knowing how to read Hebrew. “The first time I attended High Holiday services was when I led them as a student rabbi.”

For the past five years Susan and her family have made their home in Jerusalem. Two of her five children were adopted from Ethiopia. Much of the discussion and audience questions focused on her family’s adjustment to Israel. While she doesn’t intend to live in Israel forever, she has always wanted “to be part of creating that state.” For Susan that means continuing her advocacy for a two-state solution and helping cultivate deeper respect for progressive Judaism in Israeli society. “[Israel] is a very activist place and our family is involved.”

Susan’s oldest child, a daughter, serves in the Israeli Defense Forces. “My kids have to think about the world in a very real way in Israel. My husband works on energy issues with Bedouins and it’s customary for people to visit them and bring their kids. My kids had to weigh if they wanted to go Beersheba and risk being hit by a rocket.”

She’s also quick to describe Israel as the only place on earth where Judaism is truly alive for her children. They received Bibles in a ceremony at Timna in the south of Israel, where the Biblical Israelites spent part of their long sojourn in the desert. They have made seders under the Negev desert sky of their ancestors.

Sarah visited Israel for the first time this past fall. “I had no idea Israel was so cool,” she said. Borrowing a punch line from a comic friend she added, “Who does their PR, the Arabs?” For all of her initial trepidation about going to Israel, she loved seeing her nieces and nephews riding their bikes until dark. “It’s not a fear-based life. But I didn’t like going to the Wailing Wall. That space filled me with rage when I saw how little of it was for women.”

Susan characterized the racism and sexism she has experienced in Israel — particularly from the ultra-Orthodox — as “verbal idolatry.” Any group that claims “to know what God wants is committing verbal idolatry. As progressive Jews it’s our job to fight that idolatry,” she said.

Sarah also shares her sister’s sense of social justice. She recently visited Austin, Texas headlining a show she organized called “Live From N*head: Stripping The Paint Off Of Good Ol’ Fashioned Racism.” The unprintable word in the title is the name of Governor Rick Perry’s family lodge — a fact that recently recieved its 15 minutes of media attention. “Some people didn’t feel comfortable with a white person or a Jew putting the show together. But I don’t care to adhere to having to be a certain skin color. Any time some sort of hate is out there it’s important to point it out so it isn’t some [invisible] gas in the air. It’s also important to point it out no matter your skin color or ethnicity.”

At the end of the program, Susan declared Sarah “a modern day prophet. She tells the truth as she sees it.” Sarah in turn proclaimed, “my sister is my hero. I pick her brain constantly so I seem smart.”

In the Silverman sisters’ family fairytale, it’s clear that little divides the sacred from the profane. And both of them have enriched 21st century Jewry.