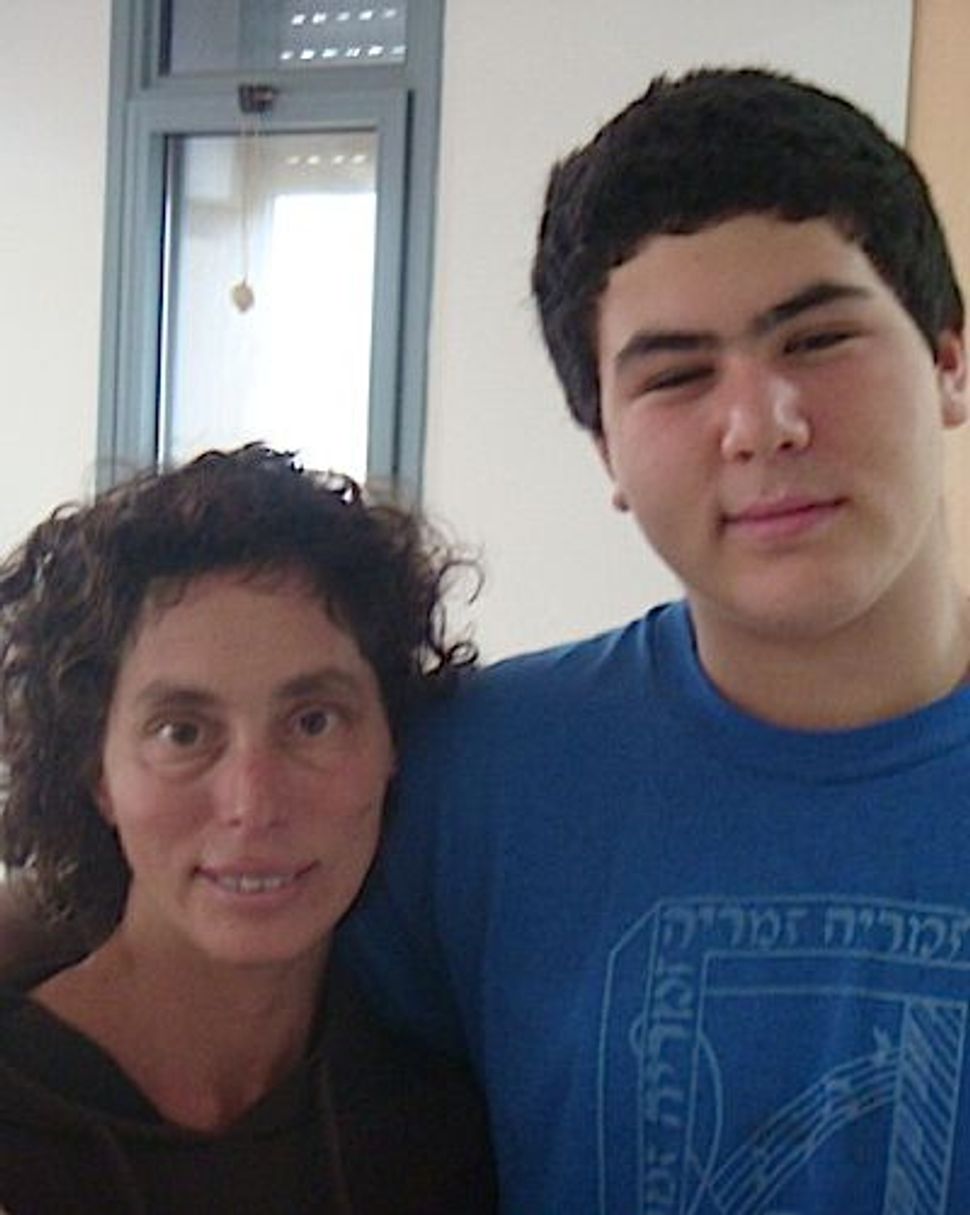 The author with her son, Adin. Image by courtesy Haviva ner-david

The hardest thing about moving to Israel from the United States has been dealing with the fact that by moving here I have put my children in physical and moral danger. Of course I know that danger lurks everywhere — car accidents, cancer-causing pollutants, violent criminals. When I am in a mall in Israel with my kids I worry about them being blown up, whereas when I am in a mall with my kids in the U.S. I worry about them being abducted. Different place, different dangers. I know that.

Is living in any country morally neutral? America was built on the backs of slaughtered natives; when I lived in New York, I regularly had to walk by homeless people. When I lived in Washington, D.C., the line between black D.C. and white D.C. reminded me of East and West Jerusalem. Growing up in suburban New York, I went to an Orthodox Jewish day school and summer camp; I did not have non-Orthodox Jews in my social circle, let alone non-Jews. Though we had some Christian white neighbors, there were no blacks, Asians or Hispanics and certainly no Muslims.

While I am unhappy with the segregated reality in Israel, at least there are some Muslim and Christian Arab kids in my children’s school, and we send the kids on Arab-Jewish interfaith summer programs. We live in Lower Galilee in a highly Palestinian and Arab-Israeli-populated area, so interact daily with Arabs. My children learn Arabic in school, and we make an effort to socialize with Arabs. My kids are, without a doubt, less Arab-phobic than their peers in Jewish day schools in the U.S.

This is what I have been telling myself since we moved here 15 years ago. Through the second intifada and the ongoing war with the Palestinians, collecting our gas masks and setting up our safe room, the second Lebanon War, missile attacks on Sderot — and all of this while Israel continued to occupy the Palestinian Territories and oppress and demoralize millions of people.

Reality hit when my oldest, my daughter Michal, received her first draft notice. I could no longer convince myself there would be peace before my kids had to serve. But she has no interest in being one of the few women serving in combat, so while army life may be challenging for a young woman who was brought up in a left wing and highly individualistic home, hopefully some of the values we tried to pass on about living in and serving the community will help her get through.

Then came the real blow.

My 16-year-old son, Adin, announced recently at the Shabbat table that he wants to be a combat soldier when it comes his time to serve.

I should not have been surprised, since the high school where he studies, Nahalal, is known to supply a steady flow of combat soldiers in high-ranking units.

Nevertheless, Adin has never struck me as a risk-taking teenager; and he spends most of his spare time in front of the computer screen or at his drum set, not working out or going to a nationalist youth group. I had assumed he would prefer to sit at a desk than in a tank, and hold a pen, not a gun. His announcement caught me by surprise.

Lengthy discussion ensued. It was pretty much me against my husband and most of my children. “Ima, how hypocritical of you!” Adin argued. “You moved to Israel, and now you tell me to shirk my army duty!”

“Someone has to be in combat,” Michal added. “How can you say that Adin should get out of it if he can while others fight in his place?”

My husband Jacob: “Are you saying that no one should serve? That we should not have an army? If so, okay. But even then, that is you and not Adin. If he were a pacifist, he could make that claim. But he is not. He wants to serve. So how can you tell him not to?”

I explained that I think Israeli society holds combat duty up as the most valued type of national service, rather than presenting a variety of options of service as equally commendable. There are so many areas in which our country needs volunteers, so why push as many 18-year-old, naïve, easily-tarnished, easily-traumatized and not necessarily morally sophisticated young men as possible into combat duty?

But this was not about rational argument. This was about emotion. Mine. As his mother, I told him, I would do what I could to prevent him from being in a combat unit. I would make sure the army knew about his chronic ingrown toenail! How could they expect him to be out on the front lines with an infected toe nail that refused to heal?! All of my emotional ranting did not help change my son’s mind. It probably reinforced his original position.

Two weeks later, news came of Gilad Shalit’s release. A few days after that, he was in his parents’ arms. Unbelievable! I cry easily, but my macho future soldier Adin also had tears in his eyes. It was clear to even those against the swap of over 1,000 Palestinian prisoners for one Israeli prisoner, that Gilad’s parents had won the battle to free their son at all cost. People could criticize Prime Minister Netanyahu or the Cabinet, but no one could criticize parents for protecting their child.