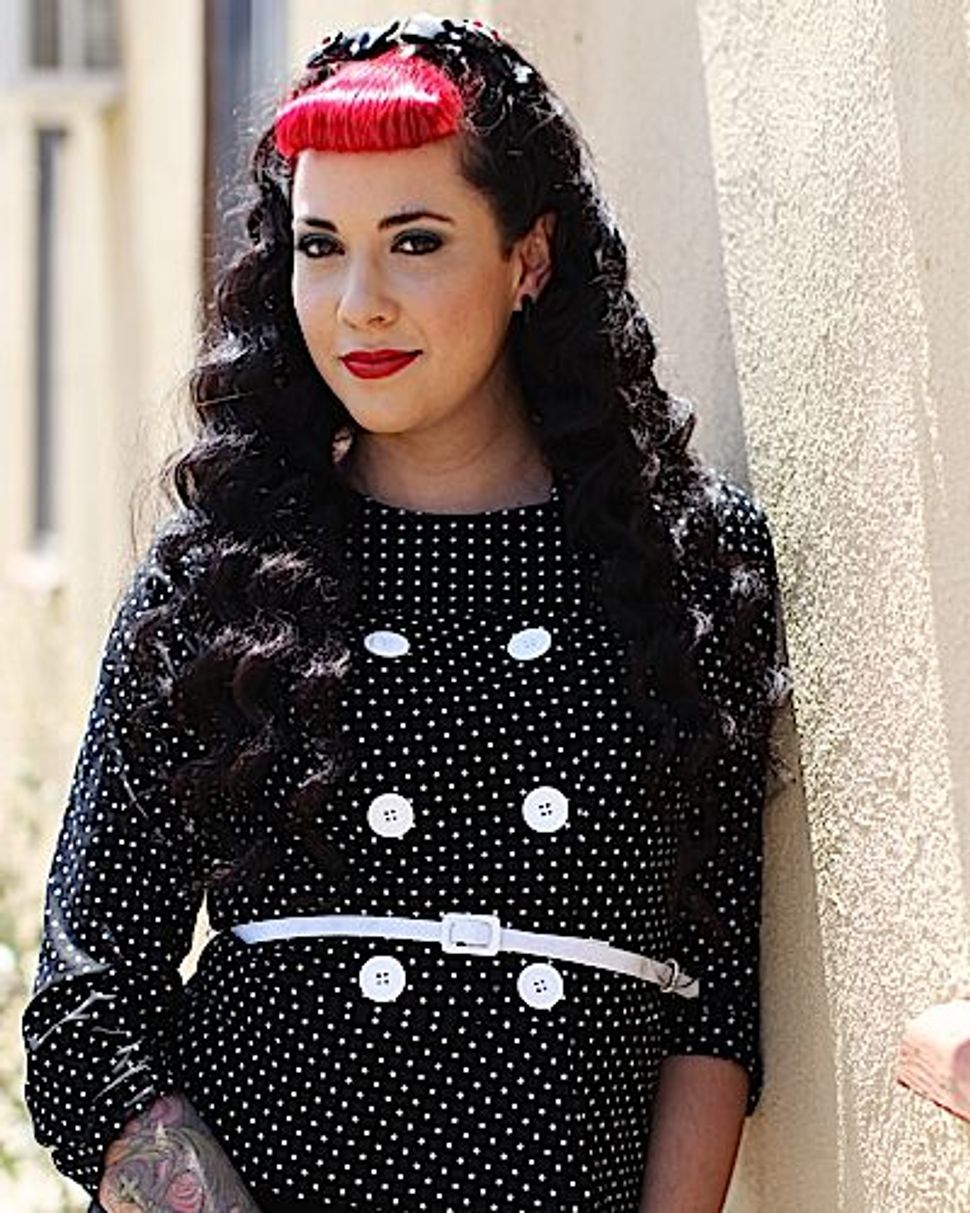 It’s hard to take your eyes off of matchmaking maven Patti Stanger on her show Millionaire Matchmaker. As she selects women to date her millionaires (or occasionally men to meet a female millionaire, or men for a gay millionaire), zinging critiques of their hair color, weight or attire, she is usually bracketed by Rachel Federoff, the company’s eclectically-styled VP of matching and her new husband, coo Destin Pfaff. Federoff and Pfaff have a young son, Sin Halo.

The Forward spoke with Federoff about what it’s like to work at Stanger’s side, and how being Jewish is part of her life.

Debra Nussbaum Cohen: How and when did you develop your fabulous personal style?

Rachel Federoff: It has always been inside me but came out in junior high school. That was such a metamorphosis period. I was always trying to be like the trendy cookie cutter friends of mine but it wasn’t working and wasn’t me. I finally realized that I needed to be myself and express myself in my own way. I don’t like to label my style but I would call it a cross between Rockabilly/Vintage and Punk, it’s usually called Psychobilly.

How did you come to work for Patti Stanger at The Millionaires Club and what, exactly, is your role there?

I was brought on right around the wrap of Season 1 of Millionaire Matchmaker. Destin introduced me to Patti as she wanted to meet the girlfriend he couldn’t stop talking about! Patti and I clicked as we both come from similar backgrounds, and she hired me on as director of registration. She saw I had a huge knack for matching and promoted me to VP of Matching.

What’s the craziest thing you’ve ever had to do as part of your job?

When I was out recruiting specific girls for a specific client, I went up to perfect girl and asked if she was single, she gave me a look like I was hitting on her! It was so awkward and funny!

Why did you name your son Sin Halo and does Destin really drive a hearse?

We came up with the name Sin Halo way before we found out we were pregnant. I have always loved unique names and how names have meanings. So we came up with Sin because it was simple, strong, and just plain sounded cool. But then I came up with Halo for his middle name as also a beautiful name but the two combined is truly what life is all about. Life is made up of light and dark good and bad without each other it doesn’t work. To us it’s beautiful, to many it’s cruel but it’s no more cruel than Pilot Inspector, Zuma, or Kingston, or Bronx Mowgli. People shouldn’t be hateful and cruel over a name. Just because his name is Sin doesn’t mean he’s destined for a negative life. He’s the sweetest, most loved child! Yes we both had a hearse but we sold it as we just didn’t have the time to do what we wanted to it. We will get another one someday!

What was your Jewish upbringing like and how is being Jewish part of your life now?

It was kind of a bummer, actually, because I grew up in Orange County, California, where it was all blonde haired-blue eyed Christians and Mormons. I was literally the only Jewish girl up till high school. I was picked on and made to feel like an outsider. everything in school was focused on non-Jewish holidays and things. My parents and family did do some traditional holidays but it was very laid back. I know more about other religions than my own, frankly. As I have gotten older and now that I live in L.A. where there are Jews everywhere, it makes me proud of whom I am, as I believe we are a race and not just a religion. Destin and I plan to teach our son both sides as Destin comes from a Catholic family. I want him to know who he is and let him choose what he wants to believe in. Destin and I are spiritual. We don’t believe in forcing or cramming religion on anyone.

Do you ever feel like Patti goes too far in her critiques of the women you are looking to match with the millionaires?

Well, yes and no. We are blunt and harsh not to hurt people, but to help them. If you were to ask your family or friends’ opinion, they would most likely candy-coat it. Well we tell you like it is, that’s all. I just don’t believe in being cruel and critiquing someone for their race or religion or even hair color. Everyone deserves love no matter what you look like or where you come from.