Women Barred From Funerals in Israel 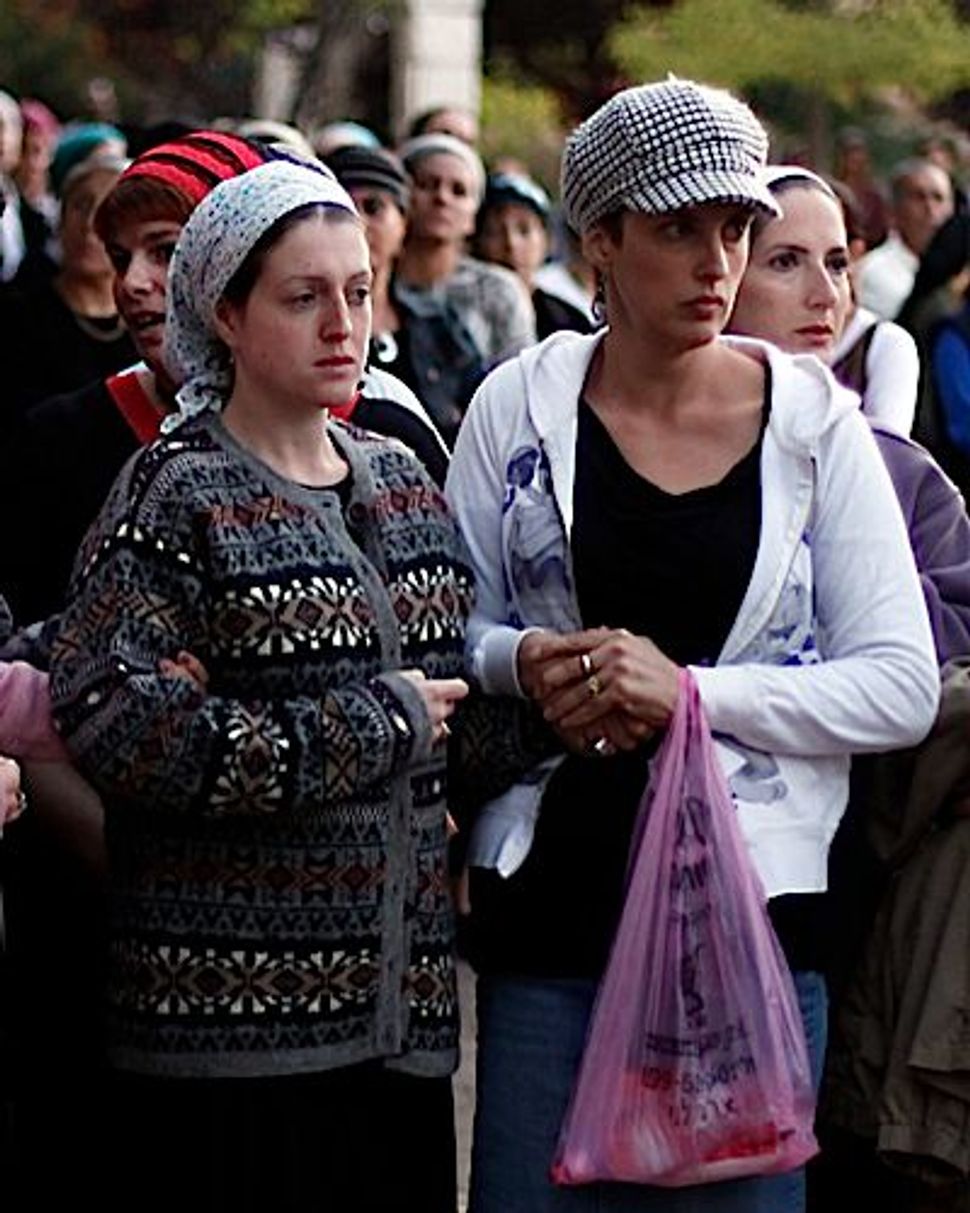 Women are segregated at growing number of Israeli funerals. Image by Getty Images

The troubling phenomenon of excluding women from cemeteries in Israel appears to be getting worse. Last week, Tal Yehezkeli of the IDF radio station Galei Tzahal broke the story of Rosie Davidian, who was not allowed to deliver a eulogy at her father’s funeral. Yehezkeli then reportedly received dozens of calls and emails from women around the country who have had similar experiences. In Jerusalem, women have been prevented from delivering eulogies. ‫ ‬ In Yerucham, Yavneh, and Elyachin, women were not allowed to accompany the deceased to the burial. In Petach Tivka, Nahariya and Tiberias, the crowd was forced into gender segregation despite the protestations of the families. All of these incidents are against the law, specifically the High Court (Bagatz) 2007 ruling that prohibits the exclusion of women from any aspect of funerals and burials. No less than eight cities are breaking the law, according to Yehezkeli, and women are furious.

Susan Ayad, one of the women who shared her story with Galei Tzahal, said that she was at a funeral in Netanya for her best friend’s husband in which there was enforced gender segregation despite the family’s wishes. She is suing the Hevra Kadisha in Netanya, aided by the Progressive Judaism Movement’s legal aid services (IRAC). According to IRAC:

Forced gender segregation at funerals discriminates against women and is disrespectful to female mourners.

Funerals are managed by municipal Hevra Kadisha [burial society] groups, which are under the authority of the Religious Affairs Ministry. Religious Affairs Minister Yakov Margi responded to the report with some frustration, and said, “We have given strict instructions to the Hevra Kadisha groups to act respectfully and to be responsive to family requests and sensitive to their needs. We have distributed executive orders on the subject and we will do it again in more explicit detail if we have to.”

According to a report on gender segregation in public spaces in Israel, written by attorney Ricky Shapira Rosenberg and presented in November 2010 to a special session of the Knesset’s Committee for the Status of Women on this subject, gender segregation at funerals began with two specific cemeteries and has clearly spread. It was first experienced at the Shamgar Funeral Home in Jerusalem and at the Segula Funeral Home in Petach Tikva. Both now have extensive signage that call for segregation, and the main hall is divided into two parts. There are also staff members of the Hevra Kadisha giving instructions on the spot, directing men in one direction and women in the other.

One woman quoted in the report said:

But as a religious woman, I felt outraged. Why are they suddenly separating men and women? Why do I, at this moment, have to start worrying if I’m standing in the right place or not? Rather than dealing with mourning for my aunt, I’m wondering if I’m turning someone on. It’s completely twisted.

Separation is enforced during the journey to the burial as well. Men are called to walk out first, with women at the back. And women reported that they were forbidden from giving eulogies. In Petach Tikva, for example, a woman told of her mother-in-law’s funeral, in which she was unable to stand next to her husband, and where only men were allowed to speak:

This was one of the most difficult moments of his life, and I wasn’t even there with him.

In Elyachin, women are reportedly not allowed to be part of the funeral service at all. Motti Avdiel, a volunteer in the cemetery, told Shapira-Rosenberg:

Here the custom is that women do not accompany the deceased. During the funeral, women are asked to stand outside.

The cemetery has thus evolved into yet another front in the rabbinic crusade to create a female-free world. This is rabbis vs. women. The shock of carrying out this war with mourners indicates how obsessive certain religious men are about the issue.

They are saying that the erasure of women from public spaces is more important than all else — more important than compassion, than human dignity, than basic human decency. With such obsessiveness, like a jihad against women, it is frightening to think where it may all lead.

Women Barred From Funerals in Israel