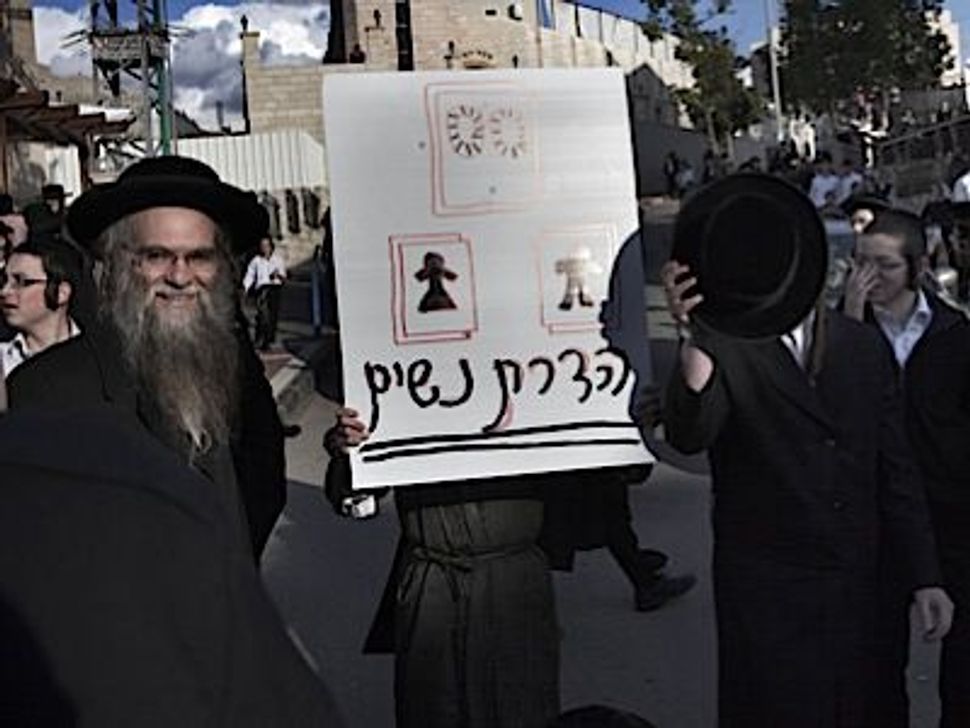 Men in Beit Shemesh call for the segregation of women. Image by Getty Images

I would like to take a moment to consider provocative women. After all, those of us who are following events in Beit Shemesh have heard a lot about this subject. A woman trying to hail a taxi in Beit Shemesh and then spat upon was called “provocative” by Haredi men around her. Tanya Rosenblit, who sat in the front seat of a segregated bus from Ashdod to Jerusalem, was accused of being “provocative” by those men who stopped the bus from proceeding on its route. Even 8-year-old Na’ama Margolese was accused of being “provocative.”

In my doctoral research, in which I spent three years in a state religious girls’ high school in Israel working on decoding girls’ identities, I came upon accusations of “provocative” in some telling moments.

One day, the school held a special “Tzniut Day” in which there was an assembly and special classes on the issue of “modesty.” (It was actually about girls’ clothing and I do wish that people would stop calling that “modesty,” as if there is anything remotely connected between body cover and humility before God.) The rabbi speaking to the class framed the issue around teaching the girls not to be “provocative” by, for example, revealing one’s upper arms.

But “provocative,” even on that day, was not just about arms and legs. To be provocative meant to lack obedience and submission. Later in the classroom that I observed, some of the girls questioned the rabbi’s argument. “What’s wrong with this part of my arm?” asked a 14-year-old girl, pointing above her elbow. “I will answer you, but you have to ask the question the right way,” the teacher responded. “If you’re asking because you want to know how to keep the commandment, fine. But if you’re asking just to be provocative, then it’s not a legitimate question.”

In a separate conversation in which we talked about how girls dealt with theological issues emerging from the terror and war that surrounded them, the rabbi said that girls come to him with questions about God, “but some girls are asking just to be provocative, and then I can’t talk to them.” The moment a girl — or woman — refuses to accept at face-value what authority figures tell her, she’s being “provocative” — even if her body is covered.

The student’s story was a particularly sad demonstration of how religious girls are taught to subsume their own independent thinking. The girl is extraordinarily intelligent and would spend one day a week outside the school at a special program for gifted students, told me that her teacher asked her to stop raising her hand in class — that it was “arrogant,” an apparent cousin of “provocative.”

The “arrogant” libel goes way back in our tradition. In the Babylonian Talmud, for example, Deborah the Judge was singled out by Hillel the Elder as the paragon of prophetic arrogance, outdoing even Jonah and Ezekiel who, we are told, knew well how to challenge God’s authority. What men can do freely, women do and receive the label “arrogant.” Similarly, halachic writings from the Middle Ages and onward describe women who don ritual fringes as “arrogant.”

This idea of women’s arrogance, like women’s provocation, is a way of hammering in the image of the correct female: She does not think for herself, she does not speak out of turn, and most importantly, she does not try to encroach upon men’s lives by acting in ways that are acceptable for men. Like the man in the Channel Two video who justified spitting on the woman hailing a taxi said: A woman’s role in in the home, period, “raising the next generation of Jews.” That’s it. All else, according to this way of thinking, is “provocative”.

The scariest part of all this is that “provocative” means that she is a free target. The woman labeled provocative is the new mark, like the witch and the sotah before her, fully outside the camp, as if whatever vile end befalls her she has brought upon herself. That is what we are witnessing today, and that should be alarming to all of us.