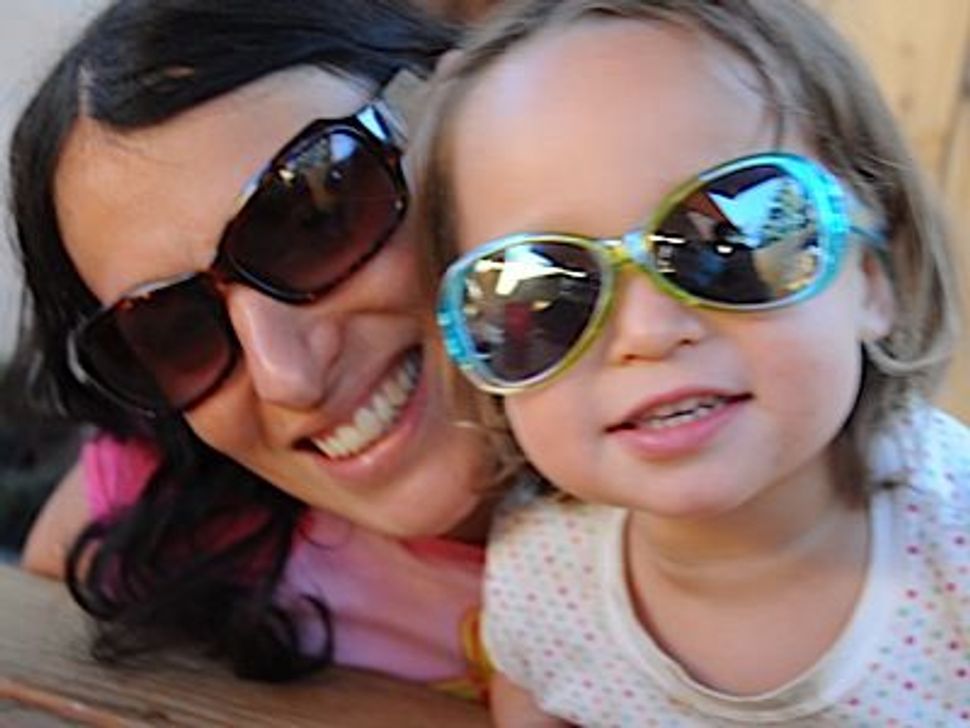 The author and her daughter, Yael. Image by Courtesy of Jennifer Bleyer

There she went, waving over her father’s shoulder. My husband pushed a loaded luggage cart outside the departure level sidewalk at JFK with one hand and carried our daughter with the other. I stood beside the car blowing kisses and watching her shout, “Bye, Mama!” until they were swallowed by the automatic doors and had disappeared into the terminal. Then, alone at the wheel, I had a Ferris Bueller moment:

When my husband suggested taking our 2-year-old daughter to Los Angeles for nine days, where he had to travel for work and his parents had offered to take care of her, the prospect seemed bizarre. I hadn’t been apart from her for more than a couple days since she was born, and in those cases, it was she who stayed home with my parents as my husband and I ventured off for a quick weekend away. I thought about going along for the trip, but entering my eighth month of pregnancy, the thought of a cross-country flight seemed as appealing as hiking the Andes in six-inch heels.

So I agreed. I was still a bit tepid about the idea, but was warming up to it as their day of departure approached. Then it came. And it was glorious.

Suddenly, I reverted to a surreal (albeit martini-free) approximation of my single, childless life. I went to parties four nights in a row, staying out until 2 a.m. and coming home to sleep in blissful silence until (brace yourselves, fellow parents) 10 or 11 in the morning. I read through a year’s worth of partially finished New Yorkers without interruption and watched Netflix DVDs that had been gathering dust for months. I worked on long-neglected story ideas, and cleaned out my file cabinet. I went to yoga. I lived on yogurt-covered raisins. I padded around my shockingly clean home without stepping on crusty Play-Doh or sticky dried orange juice.

Let me note here that I love my daughter with a ferocious passion. I have written poems about the shape of her little shoulders and the scent of her hair. I find her linguistic development the most breathtaking wonder I have ever beheld, despite having seen the mountain gorillas of Rwanda, the Mayan ruins of El Salvador and the labyrinthine markets of Morocco. I can already get worked into tearful convulsions imagining the day that we take her to college, even if it is some 15 years away.

But joy aside, there doesn’t seem to be any way around the fact that caring for young children is time-consuming and energy-sapping, even if a chunk of it is outsourced to a school, daycare or babysitter. The parenting life often reminds me of being a farmer with its routine chores that begin at dawn and do not recognize weekends or holidays, and the constant monitoring of the health, safety and development of one’s charges. It’s the way it should be, but it is relentless.

I came to feel that that there should be a distinct name for this, the child-free staycation. “Mama Furlough,” maybe? Regardless, it is decidedly more slothful than going away and leaving the kids at home. I began maniacally telling any other mother who would listen that they had to somehow finagle the experience for themselves, if only for a few days.

But by the end of the week, I was really missing my daughter. Lighting Hanukkah candles alone felt, well, lonely. I started having hallucinations that I heard her calling for me from her room. Talking to her on Skype video calls just underscored her absence.

Not long after those pangs of longing sprung up, I was back at JFK and our family was happily reunited. It’s been a few days since then, and I’m glad to report that the rejuvenating effects of this magical nameless experience are not fleeting.

It may be years until I get another one, but the memory of it will give me something to fantasize about until then. In the meantime, as the usual articles appeared advising parents about how to survive holiday travel with children, I’ve simply smiled to myself. The best survival tip? Send them off with someone else and stay home.