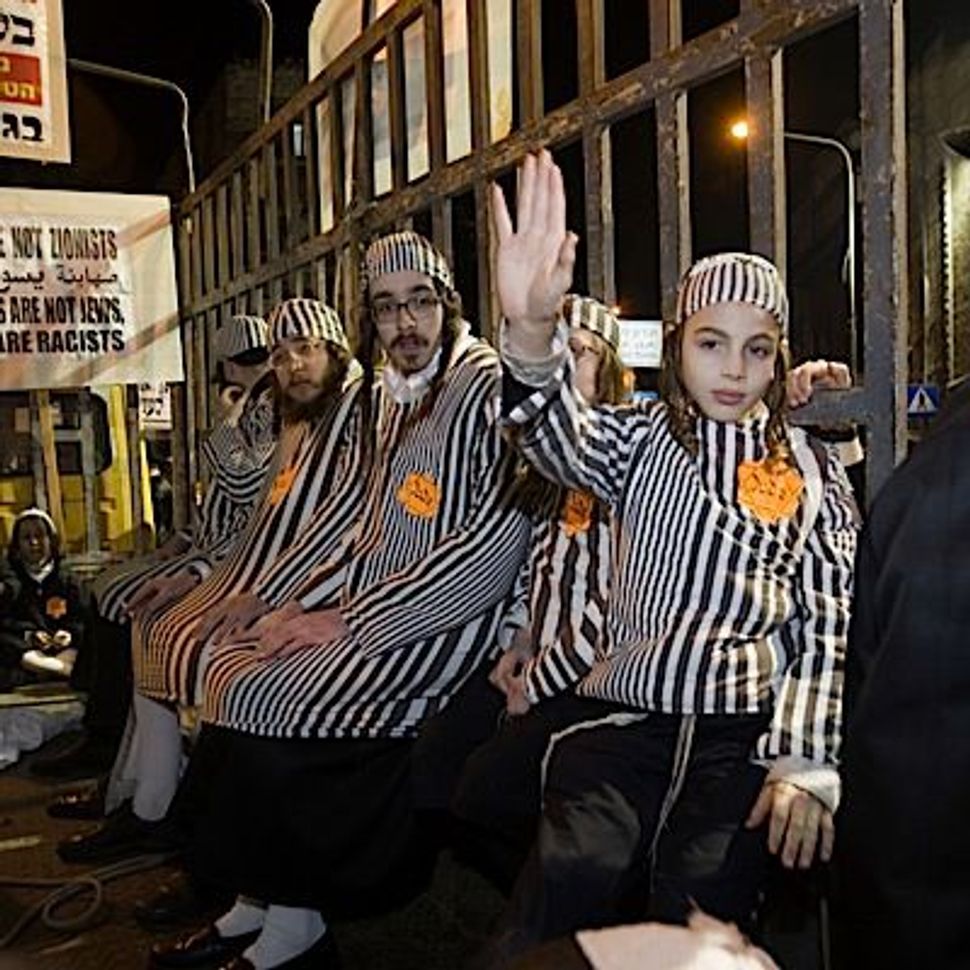 Two prominent Haredi women are boldly, and publicly, speaking out against ultra-Orthodox extremists, who advocate extreme gender segregation, and who, in recent days, have rioted against police in Beit Shemesh and protested in Jerusalem the “exclusion of Haredim” by donning yellow stars and concentration camp uniforms.

Ruth Lichtenstein, publisher of New York’s Haredi daily Hamodia on Wednesday wrote and signed a strongly worded editorial titled “It’s Time To Act.” In it, she describes coincidentally visiting Jerusalem during the protest, and being horrified by “pre-meditated cynicism, the fringe group to which he [a father who dressed his son to look like the boy with the yellow star and upraised arms in an iconic photo from the Warsaw Ghetto] belongs has desecrated an iconic symbol for their own ends.”

She goes on to warn against the serious dangers of dismissing these protesters as crazy people, writing:

The time has come to shatter the silence. Ignoring these fanatics is no longer an option, since they go out of their way to attract the secular media in order to broadcast their warped messages to the entire world…I make no demands on this group, since they are not rational…My demand is from us: How did we, in our naiveté, think that the actions of this fringe group could just be ignored? How did we give them a platform, allowing them to act as the representatives of chareidi Jewry?

…If we want to survive, if we want to merit understanding in Israel and abroad as Orthodox Jews who want to live our lives in accordance with the Torah, we must act — immediately!

Meanwhile Ruchie Freier, the Hasidic attorney spearheading efforts to get the Jewish ambulance corps Hatzalah to allow women volunteers into its ranks, wrote an eloquent piece on the Vos Iz Neias website.

We are all hurting – the silent majority has been coerced into believing that these self appointed guardians are the keepers of some sacred covenant with G-D; that they are above the law, can subjectively interpret Halacha, and are permitted to spit, stone, harass and discriminate – all in the name of modesty – tznius.  They arrogantly and blasphemously proclaim to be following the righteous Biblical zealot Pinchas the son of Elazar. Zealous fanatics need to be aware that their practices violate Halacha, secular law and the Constitution.

As the founder of B’Derech, an organization advocating and supporting Hasidic youth, Freier is particularly concerned about how this fanaticism and zealotry is a contributing factor in many young Haredim leaving the community.

She emphasizes that it is not feminism that drives her in this battle (though an argument could certainly be made to the contrary). “The essence of the Charedi woman is not based on ideologies of feminism nor religious fanaticism; it is spiritual, cherished, and accorded divine respect and value,” she writes.

In response to Lichtenstein’s editorial, one commenter wrote, “The real question is where are our rabbonim? Where are our leaders? Rabbonim, shame on you!”

In related news, one of those rabbis, Ovadia Yosef, of Israel’s ultra-Orthodox Shas party broke his silence on the issue in a letter published Thursday in the ultra-Orthodox newspaper Yom Leyom. “They are desecrating the name of God in public,” Ovadia said of the communal fringe.