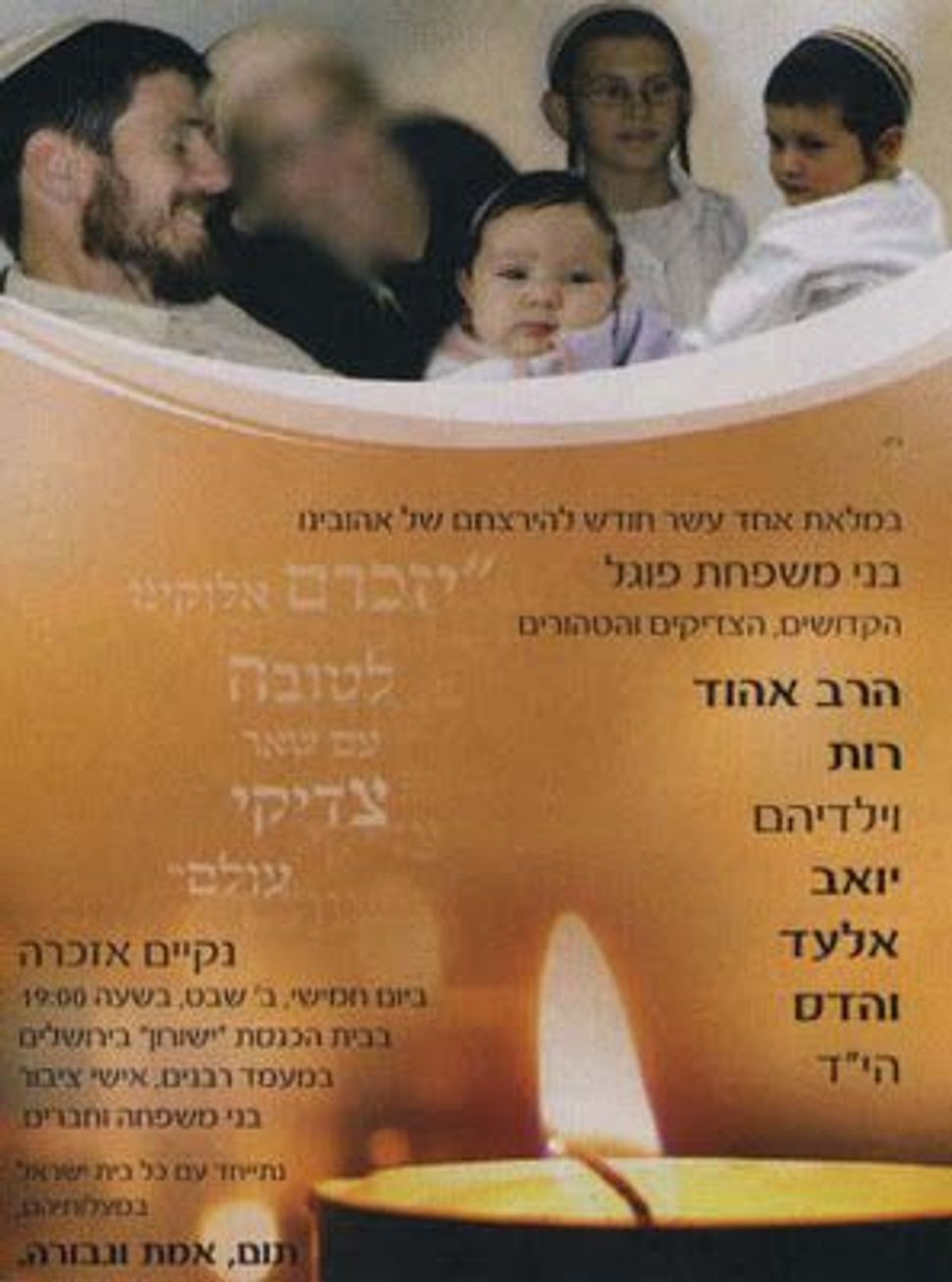 Death, apparently, offers no exemption. In the weekly bulletin of the Jewish studies center Machon Meir, a publication distributed in synagogues across Israel, an advertisement publicizing a memorial service for the Fogel family, the family of five brutally slaughtered by terrorists in their home in the settlement of Itamar nearly a year ago. In the photograph of the family in the advertisement, the face of the mother, Ruth, was blurred beyond recognition. Her image was deemed too immodest for publication.

What was unique — and disturbing! — about this particular chapter in the ongoing “exclusion of women” saga was the fact that the target audience of the publication is not the ultra-Orthodox population. Machon Meir, is squarely located in the “knitted kippa, religious nationalist” camp — in other words, Modern Orthodox and highly patriotic, with strong ties to the settler movement. On its website Machon Meir brags that the Jerusalem center has “become the landing point for many new immigrants from all the countries in the Diaspora because of its value on full integration into Israeli society and the encouragement to be a part of the Israeli Defense Force.”

This is not the camp normally identified with eliminating images of women. The blurred Fogel photograph offended several right-wing Orthodox male bloggers who have previously gone on the defensive on other gender-related controversies.

One of these men is David Bogner, with whom I’ve disagreed on many issues and who has asserted that the “whole exclusion of women thing is a completely fabricated non-issue designed to vilify the religious community.”

But the Ruth Fogel picture has apparently threw him for a loop. He spoke out strongly against it on his blog:

What in the world is mainstream Orthodox Judaism coming to when the face of a woman (a murder victim, for G-d’s sake!) is blurred out so as to not stir the base urges of religious men who might find her visage too erotic to withstand?! ….The name ‘Machon Meir’ in Hebrew can also be translated to mean ‘Institute of Enlightenment’ (or illumination)’. I have to say, seeing the notice this week from Machon Meir with a woman’s face deliberately blurred out helps make a pretty good case for exactly the opposite: Rather than striving for enlightenment, mainstream orthodoxy seems to be starting a relentless slide into darkness and ignorance. May we come to our collective senses before it’s too late.

Another blogger who goes by the name of Jameel, of similar political ilk as Bogner and a friend of his, posted a video by the Rabbi Shlomo Aviner on his blog. Aviner, one of the leading figures in the religious Zionist camp, when asked about the photo, chose to defend the decision to blur Ruth Fogel’s picture, saying, “It is to her honor. Just because she died doesn’t mean we shouldn’t respect her. If she would have been asked when she was live, then this is what she would have wanted. Just because a person is dead doesn’t mean the photo should be “hefker.”

Jameel didn’t buy it. He wrote:

I fear that Orthodoxy is being led astray. Decades ago, devout, pious, and very religious women were not blurred out of pictures. Women were photographed at weddings and those photos appeared in wedding albums. Chareidi Orthodoxy has gone down the route of hyper-tzniut. It’s distressing to see that Modern Orthodoxy is being led astray as well. By blurring the face of Ruth Fogel, the Machon Meir “B’Ahava uv’Emnua” [In Love and Faith] publication shows it has no love and no faith.

True confession: It’s nice when a critical mass of conservative Orthodox men get worked up about this kind of thing and cry out in protest, so we women can take a rest. Very quickly, after feeling the heat from folks like Bogner and Jameel, Machon Meir published an apology:

The bulletin ‘In love and faith’ is a biblical bulletin that is distributed and read in synagogues. For this reason, the bulletin’s policy is to refrain from publishing pictures of women. The publishing of the advertisement in this way was an error and did not mean to cause any harm. The Institute apologized to the family and the apology was accepted by the family with complete understanding.

If you read the apology carefully, it is clear that they believe the “mistake” was running the picture at all — not blurring Ruth Fogel’s face. From the apology, it is understood that the publication, like too many places, is officially a female-free zone.